If the NFL ever renames its Comeback Player of the Year award after Alex Smith, the reasons will go much deeper than a three-time Pro Bowl quarterback who returned to the field after a gruesome leg fracture threatened his life.

Smith announced his retirement on Monday after 16 NFL seasons that even the most imaginative Hollywood screenwriter couldn’t have dreamed up. In his moving retirement announcement on Instagram, Smith understandably talked about perseverance and wanting to be able to take walks with his wife and how he’ll now school his kids in the backyard. But there was a line in there that seemed a bit off: “Football wouldn’t let me give up.”

Smith is a brilliant man – he received his degree in economics from Utah in just two years and began working on his master’s before being drafted – but he’s also humble and resilient. Football by nature is designed to make weaker men give up. The grind. The doubters. The pain. Truth be told, it wasn’t football that aided Smith, it was Smith who never let football destroy him.

Smith was drafted by the 49ers as the first overall pick in 2005 (famously ahead of Bay Area native Aaron Rodgers, who slipped to No 24). But his football life almost ended in its infancy when, in 2007, then 49ers head Mike Nolan committed one of football’s most egregious sins: he questioned his quarterback’s toughness to the locker room. The narrative was odd even then.

Nolan, the coach who drafted Smith two years earlier, encouraged Smith to play through a Grade 3 separated shoulder, then blamed Smith’s poor performances on not pushing hard enough through his injury. Bear in mind, Smith played while his arm was almost visibly dangling from his shoulder socket.

Nolan lost the locker room and his job the next season. Smith had surgery and the promise of a resurrection in San Francisco. But then a confirmed break in the same shoulder ended his 2008 season before it began. Again, Smith was knocked down but not out.

Smith’s topsy turvy career resumed in 2009, this time under Mike Singletary. He lost a training camp battle to Shaun Hill, then reclaimed his job and finally showed promise. But success was temporary and Smith started the following season 0-4. In Week 5 at home against the Eagles a cacophony of “We Want Carr. We Want Carr,” a nod to backup quarterback David Carr, shook Candlestick Park. But it didn’t shake Smith nor did temporarily losing the starter job again, this time to Troy Smith, before becoming a free agent with a cloudy future.

JaMarcus Russell, Ryan Leaf, Tim Couch, Sam Bradford, Mitchell Trubisky. Highly touted quarterback picks who don’t perform after four or five years (or even one or two, depending on the organization) almost never shed the bust label. They crumble under the pressure, expectations, and early failures. It’s a downward trajectory that’s impossible to reverse. Unless you’re Alex Smith.

In 2011, the 49ers signed Smith to a cheap one-year deal after he impressed new head coach Jim Harbaugh. Harbaugh rightfully thought Smith could succeed in his brand of the West Coast offense. Under Harbaugh, Smith was efficient and accurate and led the 49ers to numerous come-from-behind wins. He was labeled a “game manager,” a marked improvement from “bust,” and his managerial style was a suitable complement to San Francisco’s fierce defense. Everything gelled that season, and the 13-3 49ers landed in the playoffs.

Then came the four minutes where Smith morphed into a superhero.

The 2012 Saints-49ers divisional classic went down to the wire. New Orleans had battled back from a 17-point deficit to take the lead. To win, Smith would need to best NFL legend Drew Brees in the prime of his career. But he did just that, by leading two exhilarating touchdown drives of 80 and 85 yards, which were punctuated by a 28-yard touchdown run and the famous Vernon Davis reception that Smith fit through a pinhole to seal the win.

The Alex Smith Story could have culminated on that day. The 49ers could have committed to their quarterback who could have peacefully handed the reins to rookie Colin Kaepernick a few years down the road. But this is Alex Smith. As if his NFL arc would ever be that simple.

Even after that magical 2012 season, the 49ers were looking for a QB upgrade and blindsided Smith by pursuing free agent Peyton Manning, who eventually signed with Denver. Smith channeled his frustration into another efficient start to 2013, leading the league in completion percentage, before an untimely concussion turned into the final death knell of his career in San Francisco. An unheralded second-round pick, Kaepernick replaced Smith and in just one high-profile game (Monday Night Football against the vaunted Chicago Bears defense) displayed such a dazzling combination of arm strength and electric running, that a permanent QB change was undeniable. Despite the week-by-week narrative from Harbaugh, Smith never had a chance. Kap was the guy. In typical Smith style, he was honest about being disappointed yet also supportive of Kaepernick and respectful of the organization.

Smith left San Francisco beloved by the franchise and its fanbase, a deep fondness that remains strong today. Five successful years later he left Kansas City a three-time Pro Bowler equally beloved, especially by Patrick Mahomes who has unabashedly praised Smith for his mentorship. Said Mahomes about Smith’s retirement: “With the injury he had, to lead his team to the playoffs. That shows you the player he is. I’m just grateful for the time I had with him. He really helped me be the quarterback I am today.”

Ah yes, the injury. The injury. 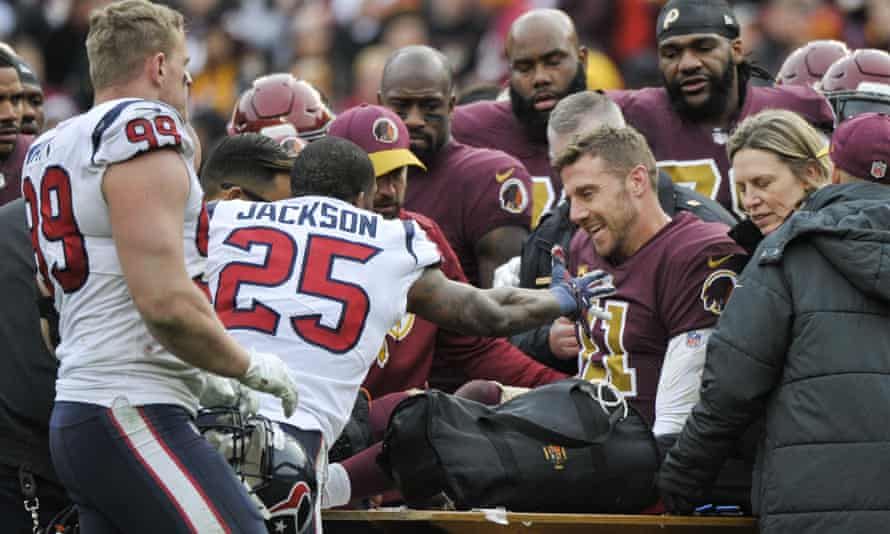 Houston Texans strong safety Kareem Jackson (25) reaches for Alex Smith as he leaves the field after his injury in 2018. Photograph: Mark Tenally/AP

Smith’s remarkable football life forged ahead in 2018 when he was traded to Washington. Finally entering an organization that was committed to him, and brimming with confidence, Smith led Washington to a 6-3 record. Then on 18 November 2018, Houston’s Kareem Jackson and JJ Watt tag-teamed on a legal sack and, well, football is the cruelest of sports. Smith suffered a compound fracture in the fibula and tibia of his right leg. It was already the most gruesome football injury in the last 25 years. Then came the infection that led to sepsis and 17 subsequent surgeries and the painstaking decision by Smith and his wife, Liz, to hold off on amputating his leg. His leg was saved, so was his life. But his playing career? No way.

Smith’s return to action in October 2020, almost two years after the injury, still feels like a dream. This is a man who couldn’t walk without a clunky metal knee brace months earlier. For Smith to take the field and endure real game action was, simply put, a miracle. For Smith to work his way back to a starter role (aided by Dwayne Haskins’ benching and Kyle Allen’s injury) and lead Washington to the playoffs after going 5-1, well, it’s time to believe in football gods. The comeback of all comebacks certainly stunned Washington – as Smith told GQ in February, “When I decided to come back, I definitely threw a wrench in the team’s plan.”

Smith’s entire NFL career was defined by driving over all the potholes laid before him. He walks away a hero, a masterclass in grit that far transcends the sport he played. Players come and go from the NFL, and even some of the most popular fade from our memories. But we’ll remember Smith’s incredible journey forever.