With its mouth agape – revealing a set of pointy black teeth – and a large protruding appendage surrounded by a series of tentacles, the sea creature resembled something out of a horror film. But, the 18in-wide fish, which somehow found its way from the depths of the Pacific to the shores of Newport Beach last Friday, is very real. It’s just a rare find.

One of the roughly 300 species of anglerfish found around the world (perhaps best known as the one with fangs and the lightbulb-like antennae dangling from its head that appeared in Pixar’s Finding Nemo) the Pacific footballfish was spotted at Crystal Cove state park by a beachgoer, Ben Estes. The specimen was all the more surprising because of its perfectly preserved condition.

“I knew it was an unusual find,” Estes told the Guardian of his discovery. He described himself as a regular beachgoer and lifelong fisherman but said: “I have never seen a fish that looked like that before.” 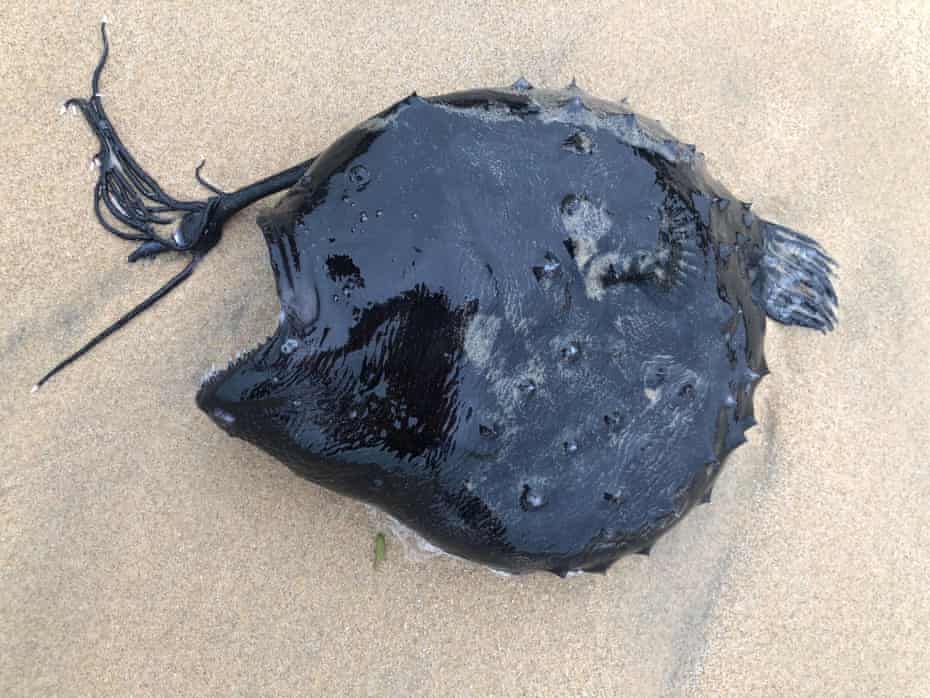 “I don’t know if he understood the implications of what he found,” Jessica Roame, the education coordinator at Davey’s Locker Sportfishing & Whale Watching, told the Los Angeles Times of Estes’s discovery. The organization was among the first to post photos of the fish on Facebook and Twitter after Estes alerted park rangers. “It happens when you’re walking along – you find dead things here and there that just shouldn’t be on the beach,” she added. “The thing about this was that it was almost perfectly intact. Where did it come from that deep below?”

There aren’t yet a whole lot of answers to those questions, said John Ugoretz of the California department of fish and game in an email. Researchers are just glad to get another glance at the species, which typically dwells in the dark underwater abysses about 3,000ft from the surface. They are rarely recovered from the depths.

After it was frozen, officials in the California state parks service were connected with the LA county Natural History Museum “in hopes that it can be transferred to their collection”, Ugoretz said. The museum has only three others in its collection but, Ugoretz added, just one is from California and none are in such good condition.

Even though they are rarely encountered, anglerfish are among the most known deep sea creatures. Their spiny teeth, though menacing, serve more to trap than to chomp their prey. With deep underbites prepared to receive any unfortunate creature lured close by their flashy phosphorescent bulbs – which glow underwater with the help of light-emitting bacteria – they sweep up other fish, squid, and crustaceans, that dwell at depths of 2,000-3,300ft, according to the California Academy of Sciences.

Or at least the females do. The males have evolved into “sexual parasites” and are much smaller in size. After fusing themselves to females, they lose all their internal organs – including their eyes – and are left with nothing but testes. Forever forged, the male provides sperm in exchange for nutrition.

The first one was found in 1833, according to a feature on the fascinating fish published in 2019 in the New York Times, after one washed up in Greenland. Since then, most of the knowledge gathered on them was from the few dead specimens that somehow wound up on shore. But in recent years, scientists and deep-sea explorers have been able to observe them on their own turf.

In a 2016 underwater expedition, researchers observed a pair procreating for the first time. Caught on tape off the coast of the Azores islands, the female was illuminated by her own bioluminescent whiskers, while her tiny partner climbed on board.

“It was amazing,” Theodore W Pietsch, an emeritus professor at the University of Washington in Seattle told the New York Times. “They’re glorious, wonderful things that need our attention, and our protection.”