Facebook says it has removed hundreds of coordinated fake accounts with links to individuals in China and in the Filipino military that were interfering in the politics of the Philippines and the US.

While the accounts had a negligible impact with US-targeted posts, activity in the Philippines reached hundreds of thousands of people. One network that focused on domestic politics in the Philippines was found to have links to the military and police, and appeared to have accelerated its operations between 2019 and 2020, Facebook said.

About 280,000 people were reached with posts in English and Filipino, about domestic politics, military anti-terrorism activities and proposed legislation, criticism of communism, youth activists and opposition, the Communist Party of the Philippines and its military wing, and the National Democratic Front of the Philippines.

The Atlantic Council’s Digital Forensic Research Lab (DFRLab) had access to some of the targeted pages before their removal. It said the earliest example dated back to 2015, and included “red-tagging” of critics of the Philippines’ president, Rodrigo Duterte – branding the opponents as terrorists or communists. It comes amid a spate of violent attacks on human rights defenders in the country, including 13 members of the leftwing group Karapatan, just within Duterte’s term.

“The military and police, along with other government agencies, have for years been ‘red-tagging’ Karapatan,” said Human Rights Watch last month. “And the reality is that people who are ‘red-tagged’ are at heightened risk, including of being targeted for killing.”

The RDFLab said it found evidence in its subset of accounts of links to the individuals in the military, including specifically the head of the army’s social media centre.

The Philippine police and military denied any links to the Facebook accounts.

The Armed Forces of the Philippines (AFP) said it was scheduled to meet Facebook Philippines’ head of policy on Wednesday afternoon. “In so far as the AFP is concerned, there are no accounts that the AFP maintain that were shut down or removed by Facebook. All of them are up and running,” AFP’s spokesperson, Marine Maj Gen Edgard Arevalo, told the Guardian.

“We will take the opportunity to ask [Facebook] for details about that report,” he said.

“The AFP upholds truth and accountability of network and SocMed account managers as to the contents of postings in our websites, pages, and accounts, he added.

L Gen Antonio Parlade Jr, a spokesman for the National Task Force to End Local Communist Armed Conflict (NTF-ELCAC), headed by Duterte, disputed Facebook’s allegations against one of the groups. The Facebook group, Hands Off Our Children, describes itself as “a group of mothers fighting against terrorist recruitment”. 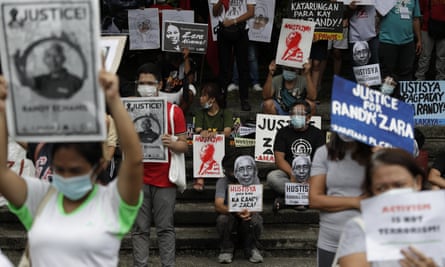 Protesters at a rally in Quezon City hold pictures of human rights activists killed in the Philippines. Photograph: Aaron Favila/AP

Parlade claimed he knew at least six of the members and the page was not maintained by the military. “Who is Facebook to judge them on what they are going through? I will not be surprised if interest groups hurt by the truth these parents are spreading are responsible for the take-down,” said Parlade.

Facebook was alerted to part of the network by civil society groups and the independent media outlet Rappler, which told the Guardian: “We welcome the take-down of state-sponsored influence operations trying to prevent journalists from doing our jobs and manipulating the citizens of democracies.”

The China-linked accounts, pages and groups on Facebook and Instagram used virtual private networks to cloak their location, to spread targeted content in south-east Asia and particularly in the Philippines, where their posts were tracked by more than 130,000 followers.

The posts in Chinese, English and Filipino, focused on global news and current affairs – including China’s actions in the South China Sea and Hong Kong – content supportive of President Rodrigo Duterte and the potential run by his daughter, Sarah Duterte, in the 2022 election, criticism of Rappler, and some praise and criticism of China.

Father Courtois: Keylor Navas was not a good teammate. When he left for PSG, everything became easier
Ter Stegen trained in the General Barca group. He hasn't played since August
Vardy has scored 7 goals in his last 6 games, 5 goals from the penalty spot
Zlatan did not score 2 of the last 3 penalties. Milan forward hit the post in the match against Sparta
Benzema spoke to Vinicius about the words at half-time of the Champions League match. They settled the issue
Barca defender Araujo injured his biceps femur
Neymar is out for three weeks due to injury. He will miss the match with Leipzig in the Champions League
Source https://www.theguardian.com/technology/2020/sep/23/facebook-removes-fake-accounts-with-links-to-china-and-philippines