The 4,500 reasons Everton have to continue progress under Silva

4,500 Everton supporters will make the trip to Sheffield Wednesday for a third round Carabao Cup tie at the end of September.

4,500 Everton supporters will brave the incoming cold, spend their hard-earned money and time together, backing their beloved Blues.

This, in itself, will come as no surprise to loyal fans.

It has long been recognised that Everton’s travelling fan-base is amongst the best in the country and rarely - if ever - are seats left to waste on away-trips.

But now it’s time for Marco Silva’s side to return the favour. Sam Carroll explains further 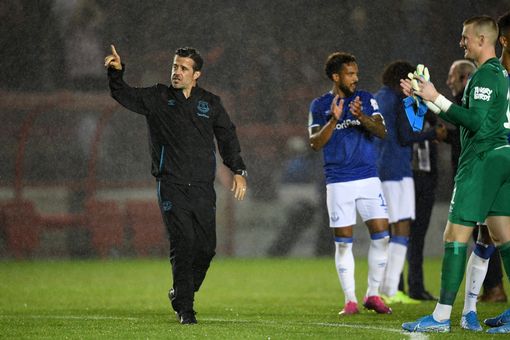 Marco Silva and Theo Walcott salute the fans after the win at Lincoln (Image: Getty Images)

Blast from the past

Tom Davies had two excellent games playing in a holding midfield role for the England under-21s during the September international break.

Following the Young Lions two victories over Turkey and Kosovo the Everton midfielder explained that he was really enjoying playing in that position for his country.

England U21s manager Aidy Boothroyd also came out and said he believed if the Blues gave Davies a holding midfield role the 20-year-old would be “really good at it”.

Davies has only played eight minutes for Everton and has missed out on matchday squads this term, Silva has now outlined what position he sees as best for the youngster and what the plan is for him ahead of his side’s trip to Bournemouth on Sunday - read Connor Dunn’s story here

Did you miss me? Plenty went on in Marco Silva’s press conference.

Marco Silva’s facing the press in an hour and you can follow LIVE updates in our special blog HERE.

Don’t give up on our news and transfers blog just yet though, I’ll be back!

Arnold Schwarzenegger poses next to the wax work of his new shape in the movie "Terminator 2" during the 44th Cannes Film Festival in Cannes (Image: JACQUES DEMARTHON/AFP/Getty Images)

Bournemouth will be without Lloyd Kelly this weekend as the summer signing continues to recover from injury.

Eddie Howe, Manager of AFC Bournemouth looks on prior to during the Premier League match between Everton FC and AFC Bournemouth at Goodison Park (Image: Alex Livesey/Getty Images)

Lloyd Kelly ‘touch wood’ will be training today, which is his first training session back.

He won’t be involved this weekend, but it’s a good step forward where he’s around the training group and we’ll look to get him a game as soon as possible.

This weekend might come a bit too early for Lewis Cook, he’s trained now for a sustained period of time and looked really good. He’s getting closer and closer and I’ll have to make a late call on him.

It’s a huge boost to the team when you consider players like Simon Francis and Lewis Cook all beginning to be back involved around the training group.

They’re big players for us and we’re really looking forward to getting a healthy squad back together.

Arnaut Danjuma is still building his robustness to get back to full training, he’s not been with the full group yet but he’s back on grass.

Eddie Howe’s already faced the press today ahead of Everton’s trip to AFC Bournemouth on Sunday.

Here’s what he said about the Blues...

There was an element of surprise that Cenk Tosun was still an Everton player when the transfer window closed this summer.

No surprise to see him continue to be linked with a return to Turkey though.

According to Aksam, Medipol Basaksehir are interested in his services and could make a bid in January if he continues to find game-time hard to come by at Goodison.

Do you care what Sam Carroll thinks? No, didn’t think so.

But AFC Bournemouth do, for some strange reason. They’ve got him to offer his ‘expert’ opinion on the Blues ahead of Sunday’s game.

Give it a read, or don’t. Not our website so I’m not fussed.

His Talking Point column this week is better anyway. Now that is worth a read!

Sadly I’m not bringing you today’s Everton LIVE blog from ECHO HQ. Instead, I’m at home with ice on my ankle after getting injured at football last night.

Sad times, but the show must go on.

But you’re not bothered by my injury updates - you want to know when Jean-Philippe Gbamin and Jonas Lossl are going to be back.

Jean-Philippe Gbamin in action for Everton

Well hopefully Marco Silva will have an update for us later this afternoon.

No return date for Gbamin with summer signing still sidelined on Premier Injuries, but they reckon Lossl could be back on the bench tomorrow.

All will be revealed...

Fabian Delph’s made quite the impact during his opening weeks at Goodison Park.

And former England international Danny Mills, speaking to Football Insider, thinks the summer signing from Man City will ensure Idrissa Gueye is nothing but a distant memory in the minds of Everton fans should he keep it up.

No (They won’t miss Gueye). I think Fabian Delph has come in and done very, very well and he will be very, very good.

That’s what he’s very, very good at. He brings that mentality, that edge, that discipline and that know-how, how to win.

Goal of the Day!

Don’t know about the rest of you but I am super excited about the return of Premier League football tomorrow.

Much more exciting than internationals, even mad eight-goal thrillers against Kosovo.

On your morning commute? Have a read of some of our stories you might have missed to start your day off right!

It’s Friday and you can practically smell the return of Premier League football.

We have plenty to get through, including live updates from Marco Silva’s pre-match press conference this afternoon, so stick with me, Theo Squires, for all your latest Everton news throughout the day.

Keane on away performances and clean sheets

Everton have been superb at Goodison Park under Marco Silva.

Since a defeat against Man City at home at the beginning of February the Blues have been imperious on their own ground - and haven’t lost any of their last seven matches in that span.

However, it’s a different story away from Merseyside with Everton just twice in the same time-span.

But Michael Keane has told the club’s website he is determined to turn that form around with the Blues having one eye on a top six finish this season.

We want to get an away victory as soon as possible.

If we want to push in to the top six or even higher that is what we have to be doing.

We know we won’t win them all, but more often than not we have to go to the teams we want to be ahead of and win at those places.

That is what we will try to do on Sunday.

With 10 clean sheets from their past 15 matches, he’s also voiced his pride at Everton’s defensive prowess.

When you get on a run like that, you want to do it more and more.

We were gutted when we conceded against Wolves. We were quite unlucky with the first goal but should have done better on the second.

But if you look at how we have been defending over the long run, we will get back to that.

It is something we are all very proud of, not just as defenders.

It starts from the striker, the way they stop the midfielders getting on the ball – all those little things.

It is something everyone should be proud of.

Bayer is ready to sell Bale for 50 million euros. The winger is Interesting to Manchester City
The parade of Fales in the Bundesliga continues: now the goalkeeper of Hertha has thrown himself ridiculously. I hit it with my face, I hit it with my hands
Holand was injured in the game against Bayern after a collision with referee Stiller
The Fan ID for entering Russia for Euro 2020 matches has been cancelled due to the postponement of the tournament
Neymar is against a pay cut at PSG. Perhaps this is due to the desire to leave for Barcelona
Juventus is ready to lease midfielder Lyon AUAR for 2 years with a mandatory buyout
Inter are Interested in forward Herta Cunha. He has 4 goals in 7 games for the club
Source https://www.liverpoolecho.co.uk/sport/football/football-news/everton-transfer-news-tosun-gbamin-16911587

AGT cleared of 'any wrongdoing' after Gabrielle Union controversy

Liverpool have not held Werner transfer talks with RB Leipzig

Winning numbers for £5.3m National Lottery draw on Wednesday May 27

Effigies of government figure and businessman hung on Salford bridge

Sausage rolls are back! Greggs to re-open

Police seized this Porsche after it was parked really, really badly

Derek Chauvin: Who is the Minneapolis ‘police officer who killed George Floyd’?

I got pregnant, found out I had cancer & my unborn baby saved my life

Macron on the brink: Humiliation for French President as seven MORE MPs abandon his party

We need a response to Covid-19 crafted alongside indigenous peoples

What are the new local lockdown rules and is your area affected?