Barcelona’s La Liga title hopes were dealt a massive blow after they twice blew the lead to draw 3-3 at Levante.

A late goal from Sergio León meant Barcelona could only climb above Real Madrid into second place, a point behind leaders Atlético Madrid, with two matches left to play. Both Madrid sides have a game in hand.

Lionel Messi opened the scoring with a fine volley after 25 minutes. Jordi Alba sent in a dangerous cross from the left but the Levante defender Jorge Miramón managed to get a touch. However, Messi adjusted his body and executed a perfect left-footed volley to settle the visitors’ nerves. Alba almost added a second moments later when he latched onto Messi’s ball over the top but he snatched at his volley and it flew wide.

Barcelona doubled their lead in the 34th minute after Ousmane Dembélé pulled the ball back for Pedri to slide into an empty net. The visitors almost had a third before half-time when Messi crossed for Sergio Busquets, whose header was narrowly wide. Instead Barcelona were stunned when Levante scored twice in three second-half minutes to haul themselves level. 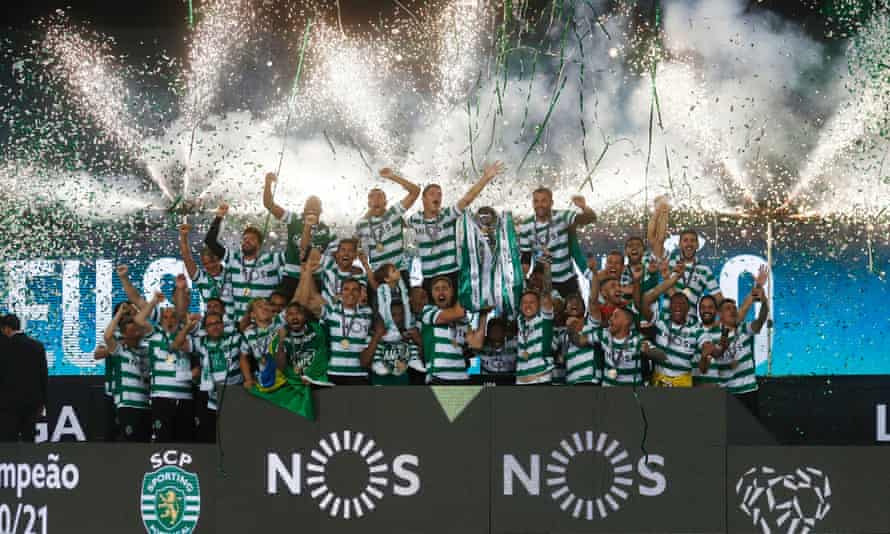 First Miramón stood up a cross and Gonzalo Melero got in front of Sergi Roberto to head home at the far post. Moments later Messi gave the ball away and José Morales played a one-two with Roger Martí before crashing the ball into the top corner. Dembélé struck with a fierce drive in the 64th minute to put the visitors back in front. But Leon left Barcelona on their knees when he turned in a cross from Tono with seven minutes remaining.

Atlético host Real Sociedad on Wednesday and Real travel to Granada on Thursday.

Sporting were crowned Portuguese champions for the first time since 2002 when they beat Boavista 1-0 at home. Paulinho struck the only goal of the game in the 36th minute and Ruben Amorim’s side saw out the win to claim the club’s 19th league title and interrupt rivals Porto and Benfica’s 19-year stranglehold on the championship.

Sporting, who are still unbeaten with two games left, have 82 points after 32 matches and an unassailable eight-point advantage over second-placed Porto.

Napoli climbed into second-place in Serie A and moved a step closer to Champions League qualification with a 5-1 win at home to Udinese. Gennaro Gattuso’s side are on 73 points, one above Atalanta and Milan and four ahead of fifth-placed Juventus.

WATCH: Dark Sky Observatory in Ayrshire burned to the ground

Rip it to shreds! Gleeful Brits celebrate as UK threatens to renege on hated EU deal