Atlético Madrid took a giant step towards the La Liga title in dramatic circumstances by fighting their way back to beat Osasuna 2-1 at home on Sunday thanks to a late strike from Luis Suárez.

The victory took Atlético on to 83 points after 37 games, two ahead of second-placed Real Madrid who won 1-0 at Athletic Bilbao. Barcelona saw their title hopes extinguished as they were beaten 2-1 at home by Celta Vigo.

Atlético dominated the game against Osasuna and hit the woodwork twice in the first half before having two goals ruled out for offside but fell behind in the 76th minute when a bullet header from Ante Budimir crossed the line before Jan Oblak could punch it away.

Atlético hit back with an emphatic finish from substitute Renan Lodi in the 82nd minute while top scorer Suárez completed the comeback by firing home from inside the area in the 88th.

Diego Simeone’s side nearly conceded an equaliser deep into added time though when Chimy Ávila caught sight of goal but Oblak got across to parry before grabbing the ball with both hands.

In Real Madrid’s win over Athletic Bilbao, Álex Berenguer hit a free kick that bounced just wide of Madrid’s far post. Real’s Casemiro had a header bounce back off the crossbar shortly after the restart, however the Brazilian midfielder then teed up defender Nacho Fernández from close range to give Zinedine Zidane’s side a priceless three points.

Substitute Raúl García was sent off late on for the hosts for what appeared to be something he said to the assistant referee.

“Obviously we wanted to win, and for Atléti to drop points, but there’s a long way to go still,” Nacho said. “They came back to win at the death and that shows things aren’t easy. We just need to concentrate on ourselves and see how it goes next time out.” Atlético visit Real Valladolid on the final day of the season next Sunday while Real host Villarreal.

Eibar’s seven-year adventure in La Liga came to an end on Sunday when they were thrashed 4-1 away to Valencia. Eibar hail from a town of 27,000 inhabitants and were promoted to the top-flight for the first time in 2014.

They are bottom of La Liga with 30 points after 37 games, three behind 17th-placed Huesca and with a worse head-to-head record. Elche gave themselves a fighting chance of survival by coming from behind to win 3-1 at Cádiz to go 18th and join Huesca on 33 points.

In the Bundesliga, freshly-crowned German Cup winners Borussia Dortmund booked a Champions League spot for next season with a comfortable 3-1 victory at Mainz on Sunday that made sure of a top-four finish with a game left in the season. 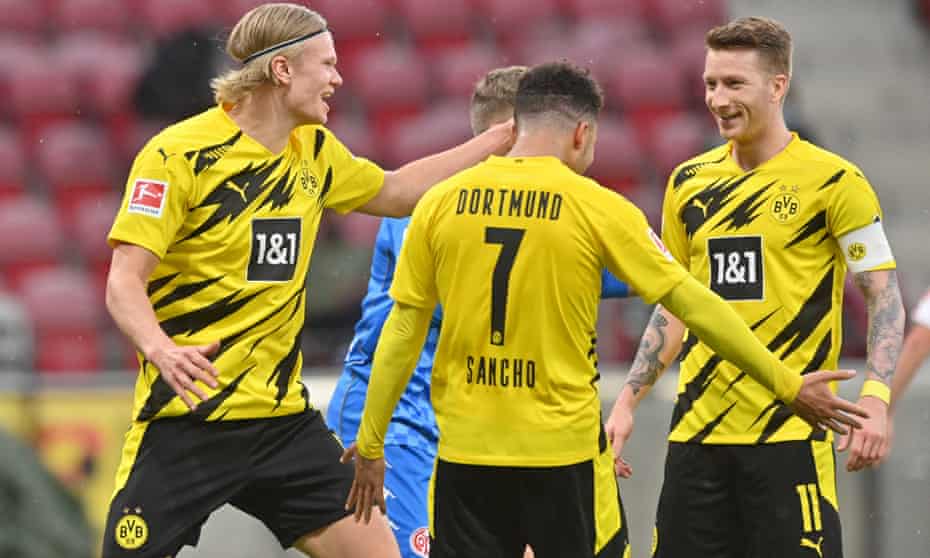 A curled shot from Raphaël Guerreiro in the 22nd minute put the visitors in the driving seat and two minutes before the break Jadon Sancho threaded a ball past two defenders and Marco Reus tapped in from close range to double their lead.

Julian Brandt rounded the keeper in the 80th minute to seal their victory and help lift Dortmund, who beat RB Leipzig on Thursday to win the German Cup, to 61 points and third place with their sixth consecutive league win.

Napoli captain Lorenzo Insigne scored to help his side beat 10-man Fiorentina 2-0 and move into provisional third place in the Serie A table on Sunday as they chase a Champions League spot.

The win leaves Gennaro Gattuso’s side on 76 points – Napoli will be guaranteed a place in next season’s Champions League if they win their final game of the season at home to Hellas Verona next Sunday.