The European Union risks ruin or transforming into a dictatorship if it continues to blackmail Poland over fears of "Polexit", according to Mateusz Morawiecki, the Polish prime minister. The comments come amid one of the most tense weeks on record between the EU and Warsaw as a row about the supremacy of European law intensifies. The Polish Constitutional Court ruled on October 8 that its rules superseded EU law - a finding Ursula von der Leyen has branded "deeply concerning".

In a letter written to the EU leaders, Mr Morawiecki accused the bloc of "punishing" and "starving" his country, with threats to withhold £48billion of Covid recovery funds if they failed to bend to the EU's will.

Mr Morawiecki said: "We ought to be anxious about the gradual transformation of the union into an entity that would cease to be an alliance of free, equal and sovereign states and instead become a single, centrally managed organism, run by institutions deprived of democratic control by the citizens.

"The language of financial blackmail, punishment, 'starving' of unsubordinated states, undemocratic and centralist pressures do not have a place in European politics. Such language strikes not only at individual states, but the entire community.

"Unfortunately, today we are dealing with a very dangerous phenomenon whereby various European Union institutions usurp powers they do not have under the treaties and impose their will on member states." 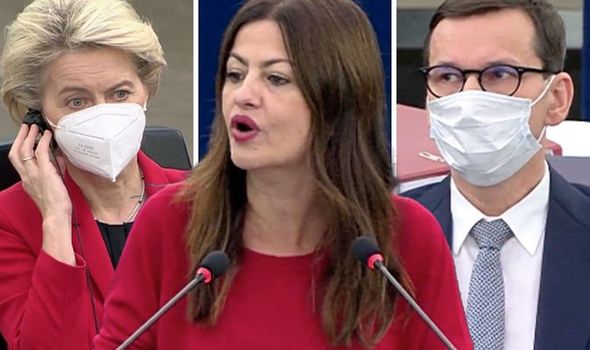 Ursula von der Leyen has expressed her deep concern at the deteriorating situation between the EU and Poland.

Addressing the European Houses of Parliament, she said: "Honourable Members, the European Commission is at the moment carefully assessing this judgement.

But I can already tell you today- I am deeply concerned.

"This ruling calls into question the foundations of the European Union.

"It is a direct challenge to the unity of the European legal order. 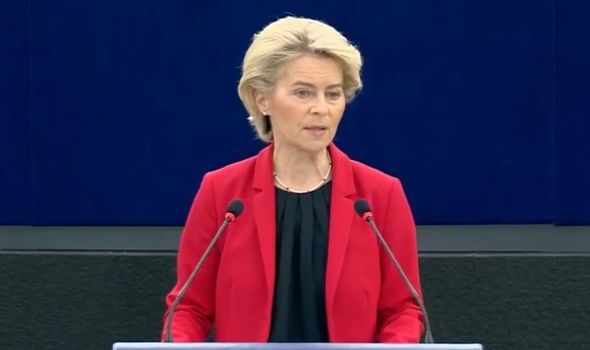 VDL vows to use 'all powers' to bring Poland to heel

Ursula von der Leyen has vowed the European Commission will use “all its powers” to bring Poland to heel after the Polish Constitutional Court challenged the supremacy of EU law in the country.

She went on to say she was “deeply concerned” by the ruling of the Constitutional Tribunal.

“This is what all EU member states have signed up to as members of the European Union.

“We will use all the powers that we have under the treaties to ensure this.

“We will uphold the founding principles of our Union’s legal order- our 450 million Europeans rely on this.”

When is the plenary session?

EU leaders are set to discuss the crisis at a plenary session today, Tuesday 19, at 8am.

The meeting comes a day after the Polish prime minister, Mateusz Morawiecki, said the EU risked ruin or becoming a dictatorship should it continue to "blackmail" his nation.

EU law is supreme, but not if it concerns the constitution! insists Polish PM

Polish premier Mateusz Morawiecki argues that EU law does have supremacy over Polish law in most cases, but not in the case of its constitution.

He says it is usual for constitutional courts across Europe to make similar rulings.

Mr Morawiecki went on to accuse the commission of trying to overrule the tribunal, which critics say is stuffed with the prime minister's political allies.

Brits must wear face masks at hairdressers and nail salons from tomorrow or face fine of up to £6,400

When is McDonald and Dodds season 3 released on ITV?

Musician, 24, in court charged with murder of Bobbi-Anne McLeod, 18, who vanished from bus stop

Glossier The Make-up Set now 35% off for Cyber Monday

I let my six-month-old baby be nocturnal, I won’t force him to sleep no matter what trolls say

9 Best whisky advent calendars you can buy in 2021

How to unlock SECRET iPhone buttons to access hidden features

How Ralf Rangnick could line up Manchester United XI this season