Giving a speech at the meeting, French Interior Minister Gerald Darmanin said that Britain must be "responsible" by making the country "less attractive for migrants".

He added that the French won't be "held hostage" by Britain's domestic politics.

According to Sky News, he also said that the migrant issue is not "anti-English".

This comes after at least 28 people died trying to cross the English Channel last week.

Notably, Britain is absent from the meeting, taking place at the Calais City Hall.

The French government withdrew their invitation to Home Secretary Priti Patel after Boris Johnson called on France to take back people who crossed the Channel to the UK in small boats.

Mr Johnson wrote a letter to President Emmanuel Macron on Thursday night setting out five steps to avoid a repeat of Wednesday’s tragedy.

But France hit out at the letter, which was sent publicly as a tweet in time for the front pages of UK newspapers.

French officials confirmed Mr Macron had not seen the letter before Johnson tweeted it. 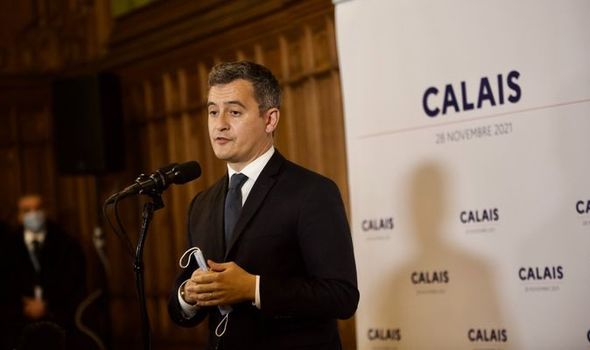 France has decided that Britain must be made less attractive to migrants (Image: Getty)

In an interview with the French radio station RTL, Mr Darmanin said: "Everyone knows there are more than 1.2 million illegal immigrants in Great Britain, and that British employers use this labour force to make things that the British manufacture and consume."

He also pointed the finger at "poor" immigration handling in Britain, and compared France's deportation numbers to the U.K.'s.

He said: "It is often said that France doesn't deport enough, but we deport about 20,000 people a year.

"[the U.K.] expels 6,000, four times less than France, even though there are more people and twice as many illegal immigrants."

Mum called police after ex-partner threatened to 'put her head on a stick' but GMP took days to respond... just eleven days later he stabbed her to death

Donald Trump’s niece says he will turn on Ivanka eventually

Princess Eugenie 'complained during her wedding to husband Jack Brooksbank'

Grenfell firefighters ‘should not be scapegoats for central Government failings’

County Durham girl, 4, died on Boxing Day after being pulled from hotel swimming pool in Egypt

‘Tug of war’ between Earth, Moon and Sun could be driving tectonic plate movements

'You couldn't make this up': Workers scramble after putting up road sign the wrong way round

Who is Guillermo del Toro?

Family of girl, 4, who died after holiday pool tragedy in Egypt demand answers

Apple planning to launch ‘biggest set of products ever’ this year, report claims

Abraham celebrates, Rashford hard at it in the sun – Monday’s sporting social

When does 2022 F1 season start and what are the new rule changes?

Sportswashing is associated with certain countries – why not Israel? | Jonathan Liew

'It's my job to help patients be less scared': Rock'n'Roll Geordie Hospital orderly Allan on how he keeps surgery moving

Woman, 22, left distressed after being approached by creep on Paisley street