Viktor Orban hits out at EU over coronavirus vaccine roll out

The Hungarian Prime Minister pledged to walk away from the biggest group in the European Parliament if a vote on a rule change succeeded this morning. Mr Orban has been at odds with the EPP since it suspended Fidesz two years ago over issues like a perceived democratic shortfall.

In a letter to the leader of the chairman of the group, Mangred Weber, Mr Orban said it was "disappointing" to see the EPP "paralysed" on administrative issues.

He wrote: While hundreds of thousands of Europeans are hospitalised and our doctors are saving lives, it is utmost disappointing to see that the EPP Group is paralysed by its inner administrative issues and is trying to mute and disable our democratically elected MEPs."

He continued: "The amendments to the rules of the EPP Group are clearly a hostile move against Fidesz and our voters. 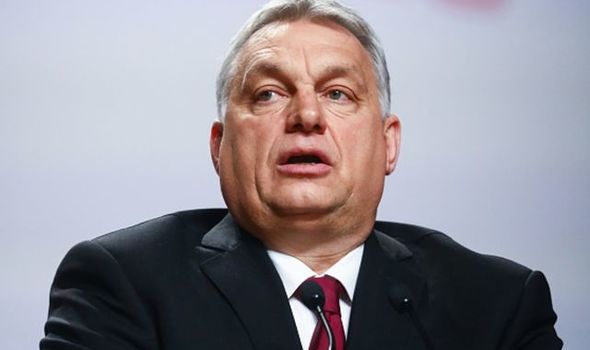 "Limiting our MEPs' ability to carry out their duties as elected Members of the European Parliament deprives Hungarian voters from their democratic rights.

"This is antidemocratic, unjust and unacceptable.

"Therefore, the governing body of Fidesz has decided to leave the EPP Group immediately."

EPP members voted to change their rules to allow the expulsion of Hungary's ruling Fidesz party from their group, an EPP spokesman said on Wednesday.

Many of the EPP's member parties object to the membership of Orban's right-wing party, which they say has weakened Hungary's democracy and curbed media and other freedoms in the EU member.

Of the 180 EPP Members of the European Parliament, 148 approved the change, 28 were against and four abstained.

"The change to the rules of procedures was just approved", the spokesperson wrote in a text to Reuters.