This article contains affiliate links, we may receive a commission on any sales we generate from it. Learn more

Krystsina Tsimanouskaya, 24, spent the night at a hotel in Tokyo’s Haneda Airport under police protection after publicly attacking the regime of President Alexander Lukashenko. She was reportedly ordered to return to Minsk after she was told to compete in the women’s 4x400m relay on Thursday, an event she had not trained for. After her criticism of the Belarus Olympic Committee, the 24-year-old athlete was told to quit the Games and return to Belarus.

According to her account, she was ordered to pack and taken to the airport, accompanied by the team psychologist and another official.

Ms Tsimanouskaya told the Tribune sports news service in Minsk that it was under orders from a “higher level” than the Belarusian Ministry of Sports.

She said: “I am afraid that in Belarus they might put me in jail. I am not afraid that I will be fired ... I am worried about my safety. And I think that at the moment it is not safe for me in Belarus.”

The athlete managed to convince Japanese police officers at the airport to place her under protection to prevent her from being taken back to Minsk. 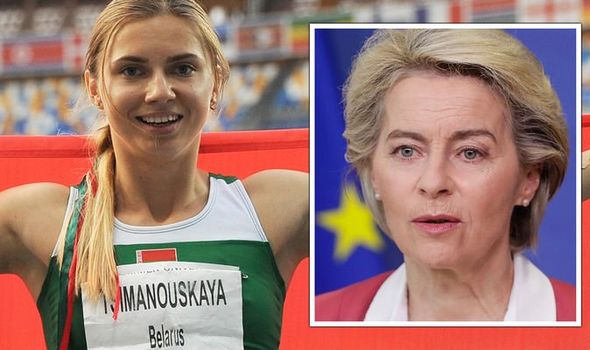 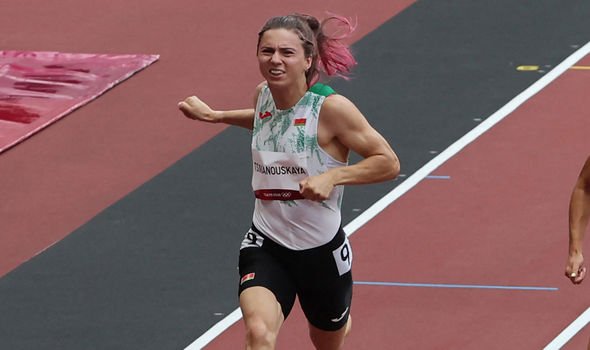 Poland eventually offered her a humanitarian visa so she can live in exile and continue her sporting career.

Reacting to the asylum offer, the European Commission said attempts to remove Ms Tsimanouskaya from Tokyo was another example of the brutality of President Lukashenko’s regime.

A spokeswoman told Express.co.uk: “The attempt to forcibly repatriate Krystsina Tsimanouskaya against her own will is another example of the brutality of the repression of Lukashenko’s regime that hits all categories of Belarusian society, including athletes, and does not respect any Olympic truce.

“We express our full solidarity to Krystsina Tsimanouskaya and commend the member states that offered her support. 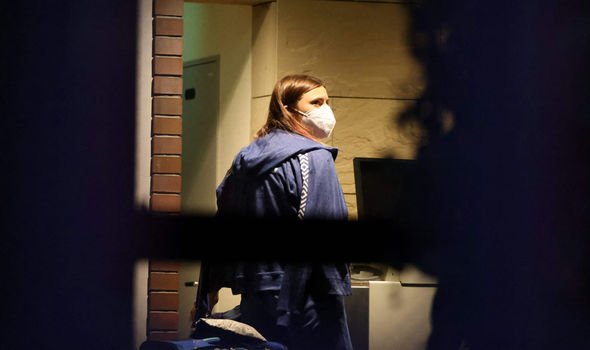 Krystsina Tsimanouskaya at the Polish embassy in Japan (Image: GETTY)

“We welcome the fact that she has now been given a humanitarian visa by Poland.”

The Czech Republic also offered Ms Tsimanouskaya assistance after she refused to return to Minsk.

Belarus, a former Soviet state, has been run by autocratic leader President Lukashenko since 1994.

He faced massive protests last year after yet another electoral victory, which critics have claimed was fraudulent.

MUST READ: China invasion of Taiwan would be on 'ultra-mega' scale 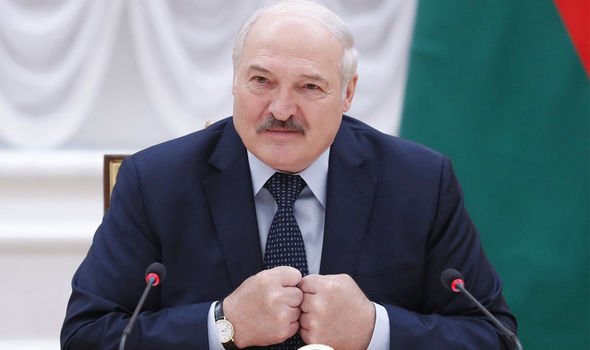 His son Viktor is the president of the Belarus Olympic Committee.

The EU has been put under pressure by some of its most vocal supporters to do more to fight the Lukashenko regime and protect dissidents.

He said: “The EU must ask the IOC and Japanese officials to intervene and ensure she is offered protection from the Belarus regime.”

It was bolstered after Belarus was accused of forcing a Ryanair flight to land in Minsk, in order to arrest a dissident journalist and activist.

Messi - in PSG's application for the match against Manchester City
Sheriff in the Champions League-the miracle of the year. The cancellation of the limit helped, but so far in Moldovan football it is terrible: neither fans, nor money
The son of Eto'o became a player of Vitoria Guimaraes
Donnarumma will be PSG's goalkeeper in the match against Man City. He will make his debut in the Champions League
Jorginho: I was worried about the talk that I would not have been at Chelsea without Sarri
Dybala and Morata have muscle injuries. They will not play with Chelsea and Torino
Neville criticized the players for apologies in social networks in the style of Bruno: Their PR people create fake personalities

I’m 21 & a parent to a 15-year-old, I never get taken seriously by her teachers but I don’t care as long as she’s happy

When will John Hinckley be released from prison?

Why is Lauren Holt leaving SNL?

‘I should have quit way before Tokyo,’ says four-time gold medalist Simone Biles

After losing my leg in a bomb attack, seeking refuge in the UK gave me hope

'Reckless' man, 24, who set sleeping homeless man on fire to 'to show off' jailed

Man who police want back in jail after release last year

Petrol and diesel prices have risen amid fuel crisis

Will Smith and Jada Pinkett’s marriage arrangement should be celebrated

Germany has never before had a transgender woman MP. Now it has two

Driving licence warning as new change this week could land you £1,000 fine

Mum with back pain left "hysterical" after receiving devastating diagnosis

Supermarket giant given go ahead to extend Motherwell store

Kate Middleton’s nanny is banned from saying an innocent word in front of George, Charlotte and Louis

How Uzbekistan’s rampant development is prompting a grassroots rebellion