England had the points on the board, they had the star quality and the theory was that they would drive home their favouritism, making a statement en route to the last 16 of this European Championship.

Instead it turned into a night of frustration for them, when the flaws in Gareth Southgate’s attacking gameplan were etched across Wembley and Scotland revelled in showing their old rivals that it is a perilous business to write them off.

On a night that will live long in the memories of the small band of Scotland fans inside Wembley, their team defied England, holding them largely at arm’s length with a performance of spirit and no little quality.

They even had the chances to earn more than the draw, most notably a Stephen O’Donnell volley that extended Jordan Pickford in the first half and they will believe that a first ever qualification to the knockout rounds of a major finals is now on – if they can beat Croatia in their final group tie.

The draw was not a disaster for England – far from it – but the performance left much to be desired and the loud boos that greeted the team at half-time and full time told their own story.

As he was in the win over Croatia, Harry Kane was unable to exert any influence and was once again substituted and it was difficult to recall England truly raising the temperature with their work in open play. The closest that they came to scoring was from an early John Stones header on a corner that struck the upright.

It was the 115th meeting between the nations, the latest instalment in a drama that goes back to 1872, although it was only the second time that they had faced each other at a major finals. The first was during Euro 96. The history was unavoidable and the players from both sides are well-schooled in it. But this was about the here and now, what was at stake and the fundamental thrill of having fans back inside Wembley for a showpiece tie.

It was not like the old days, for obvious reasons, with the stadium only a quarter full, but those present were still able to whip up a boisterous atmosphere, the edgy tone set when the home support loudly booed the Scottish anthem. Sad to report that there were also boos when the players from both teams took the knee before kick-off, although the cheers of the majority quickly drowned them out.

Southgate wanted to get onto the front foot and the changing up of his full-backs was geared to that end, particularly Luke Shaw for Kieran Trippier on the left; a more natural and thrusting option. There were no more than a few flashes from Shaw in the first half whereas Reece James struggled on the other side.

It was fast and furious; physical, too, fouls pockmarking the opening exchanges and the referee, Antonio Mateu Lahoz, having to fight to assert his authority. England did not want it to descend in a scrap but it felt that way for long spells before the interval.

It said much about England’s lack of creativity and cohesion in the first-half that their only real chance came from a corner. What a chance it was, the Scotland defence melting away to allow Stones a free leap at Mason Mount’s delivery on 12 minutes. He thumped it into the post. 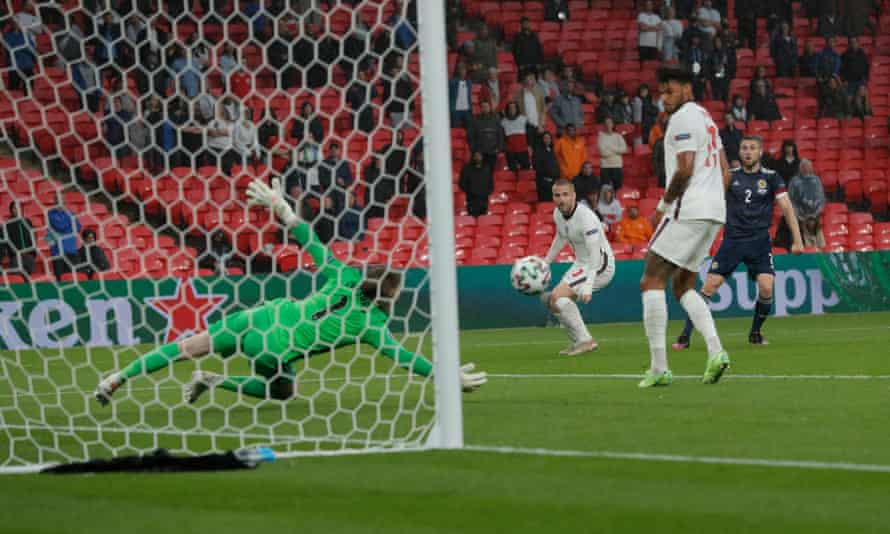 Apart from that, there were flickers from the energetic Mount but make no mistake, Scotland could have scored before the break and it would have rewarded the positivity of their approach.

Che Adams saw an early shot blocked by Stones after he dropped off into space but the big opportunity came in the 32nd minute when the fit-again Kieran Tierney beat James to cross and O’Donnell caught his volley sweetly. It forced Pickford into an excellent low save, with Adams just failing to get over the rebound.

Scotland’s burgeoning confidence was reflected when they dragged England about with a lengthy passing sequence on 44 minutes, the move finishing when Adams again dropped off and shot for goal, winning a corner via a deflection. Pickford raged. England had to be better.

There had been boos from some England supporters upon the half-time whistle, the frustration showing. Scotland were fiercely committed, well drilled in their 5-3-2 formation and there were times when they might have wondered where all of these feted England attackers were? When Kane dropped into wide areas in search of involvement, Scotland had to take heart.

England pressed more and more as the second-half minutes ticked down, trying to make something happen, but it was easy to fear that Scotland could pinch a goal at the other end.

It was that kind of night, when England were not able to assert the levels of control that they would have liked. Adams was a threat and Lyndon Dykes almost hooked home following a corner only for James to head clear. The shot looked off target.

England continued to labour in creative terms – a James drive that flew high in the 55th minute an isolated moment to quicken the pulse – and Southgate would turn to Jack Grealish after the hour, withdrawing the ineffectual Phil Foden.

Grealish was unable to fashion the breakthrough. Southgate has plenty to ponder.