The coronavirus pandemic has sparked an unprecedented crisis throughout the European Union, with a huge rift erupting between the 27 member-states. This week's failure to agree a joint EU economic response to the crisis has already set off a wave of furious criticism from leaders in Italy, Portugal and Spain. On Thursday, Germany, the Netherlands and other northern European countries rejected the plea of nine EU countries for so-called "corona-bonds" to soften the economic impact of the pandemic.

Spanish Prime Minister Pedro Sanchez told other EU leaders that the "European project" is at stake, while Italian Prime Minister Giuseppe Conte questioned whether the EU was "truly adapted to a war".

The French broadcaster claimed that even German Chancellor Angela Merkel admitted the arguments threatened the stability of Europe.

The summit ended with a declaration giving eurozone finance ministers two weeks to come up with a solution. 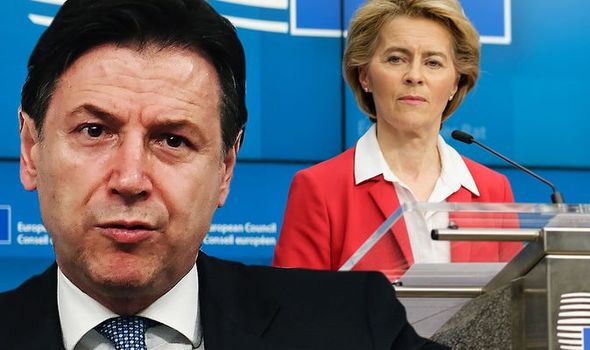 The coronavirus pandemic has sparked an unprecedented crisis throughout the European Union (Image: GETTY) 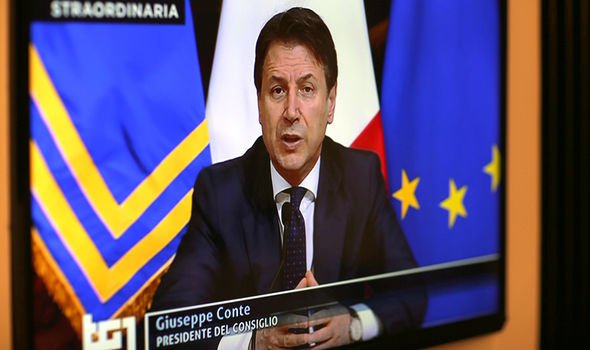 Countries such as Italy and Spain, who are the hardest hit frrom coronavirus, see the "corona-bonds" debate as a "test of the EU's commitment to them".

On Friday he tweeted: “First let's beat the virus, then think about Europe again. And, if necessary, say goodbye. Without even thanking it." 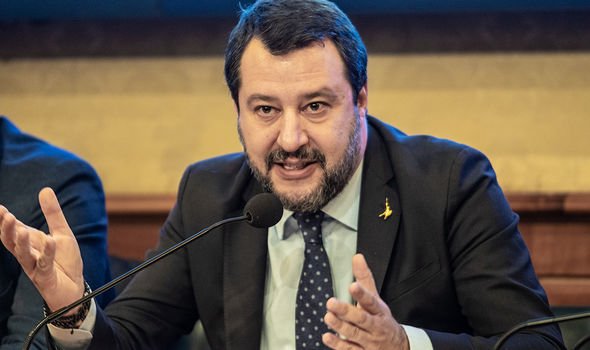 Salvini said Italy should consider leaving the European Union once the country wins its fight against the outbreak (Image: GETTY)

He said that two weeks of more debate would take place "while people die," before comparing the EU to a "den of snakes and jackals".

Italian Industry Minister Stefano Patuanelli also condemned the lack of unity: "They want us to get into debt so they can punish us."

Portuguese Prime Minister Antonio Costa picked out the Dutch as the main hurdle, describing their rejection of the proposal as "repugnant". 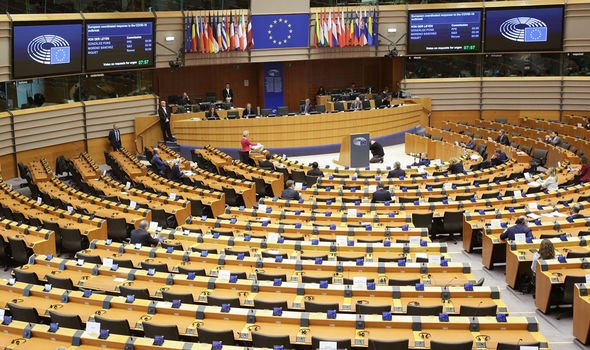 The coronavirus pandemic saw much of the European Parliament in lockdown (Image: GETTY)

He went on to lash out at the  "the recurring pettiness" of the Dutch government for refusing to help them.

Several EU leaders acknowledge that Europe is likely to be hit by a severe recession if a joint response cannot be reached.

On Friday, Italy overtook China to become the second-worst affected country after the US.

Italy also recorded the highest daily rise in deaths anywhere since the outbreak began, with 919 fatalities, which means 9,134 people have now died from the virus in the country.

Barnes on Werner at Chelsea: if Klopp really wanted him, Timo would have chosen Liverpool
Klopp on Liverpool players taking a knee: I was proud of. This is an important message
Bale's agent: Gareth speaks Spanish. TV experts make themselves look like idiots
Krasnodar does not plan to release Adamov, who is Interested in Loco. His compensation is 20 million euros
Chelsea are actively working on the transfer of Chilwell
Porto beautifully thanks the doctors: they replaced the sponsor with a Super Doc and wrote the names on the form by hand
David Alaba: it's Sad to see black brothers and sisters go through so much pain. I don't approve of racism
Source https://www.express.co.uk/news/world/1261604/European-Union-Coronavirus-response-Italy-Spain-Portugal-corona-bonds?utm_source=feedburner&utm_medium=feed&utm_campaign=Feed%3A+daily-express-news-showbiz+%28Express+%3A%3A+News+%2F+Showbiz+Feed%29

Most Newcastle primary schools begin to reopen from Monday

Liverpool told they've made the right decision over Timo Werner

Gini boost and what else we learned from Liverpool training

Newcastle's baptism of fire as Premier League gets back under way

Killing of elephant with explosive-laden fruit causes outrage in India

Why Hull City will charge fans £10 to watch every game

To win justice for George Floyd, we need the rage that abolished slavery | Jericho Brown