It was inevitable but Ellen White couldn’t quite believe it, arms outstretched, fists pumping, face etched with joy. It had taken a spell of just three minutes for her to match then surpass the all-time England goalscoring record of 46 set by Lionesses legend Kelly Smith.

So overcome with the emotion of the occasion the Manchester City forward, making her 101st appearance, almost forgot her trademark goggle celebration, as she skidded onto her back to be engulfed by her jubilant teammates just nine minutes into England’s romping 20-0 defeat of Latvia – surpassing their record 13-0 defeat of Hungary in 2005 – in their World Cup qualifying game in Doncaster.

Four hat-tricks – from White, Lauren Hemp, who scored four, Alessia Russo and Beth Mead – were added to by Jordan Nobbs, Jill Scott, Georgia Stanway, Ella Toone, Jess Carter and two from Beth England as the Lionesses ensured White’s record-breaking match would be one to remember as more records tumbled, debuts were made and first senior goals were scored.

The 10-0 defeat of the part-time team in Latvia meant that the tantalisingly close record, that White had moved one goal closer to with a 1-0 win over Austria on Saturday, was there for the taking. The only thing standing between White and history was perhaps the building expectation that it was coming.

Just three minutes in and England had a lead that would remind them just how easily they could carve open the misshapen Latvian defence. A cut back from Hemp was met by Arsenal’s Mead and the forward side-footed in from six yards out.

Three minutes later and White had matched Smith, with an uncharacteristic 20-yard strike that dropped down over goalkeeper Laura Sinutkina.

Good things clearly come in threes and, in the ninth minute, White’s City teammate Stanway whipped the ball around the defence for the record breakers to tap in. With history made, the downside was perhaps how few were there to see it take place as standstill traffic around the ground meant many fans filed into Keepmoat well into the first half. They needn’t have worried though, England were here to put on a show for the eventually healthy-sized and heaving crowd.

Mead grabbed a second in the 12th minute after dancing into the area and smashing into the far side of the net before Hemp scored her first senior international goal, starting the move with a one-two with White before continuing her run and heading Stanway’s pass in. 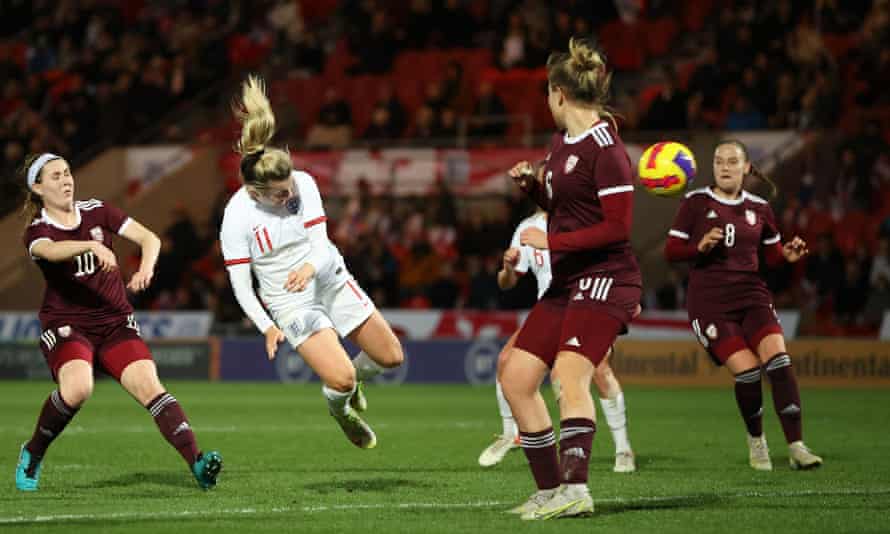 Lauren Hemp heads home England’s fifth goal, and the Manchester City winger would go on to claim four herself on the night. Photograph: Molly Darlington/Action Images/Reuters

Mead then scored her third in 23 minutes, heading powerfully in at the far post from a Hemp cross – not quite beating her 14-minute hat-trick scored against Northern Ireland at Wembley in October.

Manchester United forward Toone and Hemp scored within a minute of each other to give the home team a commanding 8-0 lead at half-time.

Shortly after the restart and White had a hat-trick of her own and had moved level with Gary Lineker and Harry Kane on 48 England goals and just five shy of Wayne Rooney’s record tally of 53. Goalkeeper Alina Skjemenova, who had come on at half-time, could not keep out the forward’s powerful effort from the edge of the box and batted the ball into her own net.

There was no let up from the rampant Lionesses as manager Sarina Wiegman handed caps to some of the fringe squad members. Stanway scored from the spot after Mead was felled, then substitute Carter, on for captain and Chelsea teammate Millie Bright, turned in from point-blank range.

Chelsea’s England, who led the line with White from the off, finally got into the mix having been flagged offside incorrectly in the first half and substitutes Scott and Russo added one each with 19 minutes remaining. Hemp scored the third hat-trick of the game not long after. Nobbs put in the 16th and Russo added another two for the fourth hat-trick of the match, England grabbed a late second and Hemp added her fourth.

Bruising scorelines can be painful, and there is perhaps an even greater argument for World Cup pre-qualifiers given this result and the 19-0 victory of Belgium over Armenia, Northern Ireland’s 11-0 win over North Macedonia and Spain’s 12-0 defeat of the Faroe Islands – all last Thursday.

However, England can only play the team in front of them. We know they can score and, in February, against Canada, Spain and Germany, we’ll finally find out whether they can defend.