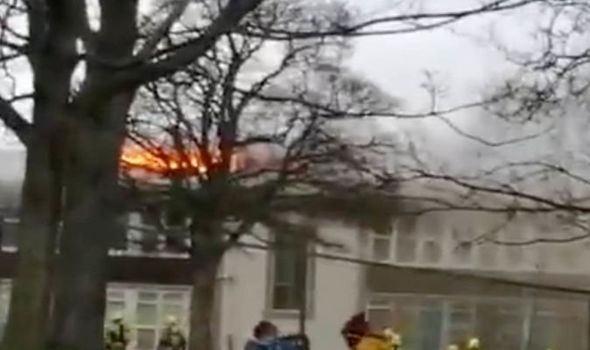 Up to 50 firefighters were called to Liberton Primary School, in Gilmerton Road, Edinburgh, just after 3.30pm. The fire has reportedly spread to the roof of the school, with a fire service spokesman describing the fire as "well developed" to the Edinburgh News. They added there were no reports of any injuries to children or staff. The school day had ended but children and staff at an after school club were evacuated. A police spokeswoman also added Gilmerton Road has been closed to traffic within the last half hour.

A parent, who did not wish to be named, said children and staff were evacuated from the building as the blaze broke out.

They told Edinburgh Live: "It's a pretty big fire, lots of firefighters and appliances are at the school trying to get it under control.

"The school kids were all out of the building but the after school club was on, so the building was evacuated."

Lothian Bus services 3, 8 and 29 have been diverted as a result of the fire.

The cause of the fire has not been revealed.

A Scottish Fire and Rescue Service spokesperson said: “We were alerted at 3.33pm on Wednesday, February 5 to reports of a fire within a school in Edinburgh.

“Operations Control mobilised a total of nine appliances to the city’s Gilmerton Road, where firefighters were met by a well-developed fire within a ground floor classroom.

“Crews currently remain on the scene working to extinguish the fire. There are no reported casualties.”

UK weather: Storm Jorge to smash Britain with 70mph winds and a month of rain

Girl, 15, dies days after being hit by a car in Sunderland

Dear Coleen: My boyfriend’s anti marriage but I want to propose to him

Cyclist who hit 'phone zombie' when she stepped into road left with £60,000 bill

What channel is Arsenal vs Olympiakos? Kick-off time, TV and live stream details

Coronavirus: Hope for Brits as 130 guests at quarantined Tenerife hotel allowed to leave

Queen’s brutal Meghan Markle snub exposed: ‘She gets what she’s given!’

Images of the incredible finds and treasures in Manchester Town Hall

Fancy being a sweaty papa in aid of charity?

Poulton school statement after outrage over shutters over toilets during lessons

What experts say about Coronavirus: how contagious, how it spreads and how long it can live on a surface

Corbynites in the shadow cabinet face a choice: sack themselves or be sacked

Albert Kelly v Jake Connor: Who gets the nod from Lee Radford?

Common toxin made in gut can cause bowel cancer, scientists find

Brain wiring could be behind learning difficulties, say experts

Sheila, the West End grandma 'trapped' 18 floors above Newcastle due to faulty lift

Earth has a new moon, astronomers say- what's it like?

When is Doctor Who back? The series 12 finale airs this Sunday

Coronavirus outbreak: Over 100 suspected cases of COVID-19 reported across Tayside

Police want to trace man after cars damaged in Darlington

Cracking the whip: who should direct Indiana Jones 5 now that Spielberg is out?

Report of quad bike theft at Colton investigated by police

What can Bernie Sanders do for U.S. Latinos?

How many days are there between Shrove Tuesday and Easter?