EastEnders spoilers: Did Phil Mitchell hear Ben threatening him in hospital? His memory is slowly returning

Phil Mitchell is  determined to get to the bottom of what went on the night he was attacked.

The hard man will confront both son Ben and Kat Slater in EastEnders tonight as he comes closer to finding out the truth about what happened on the night he was attacked.

As Phil  gets closer to the truth, those involved – AKA Ben and Kat – fear the worst.

As Phil begins to remember bits and pieces about that night, he soon confronts them, but will he find out the full truth?

We know that Phil’s memory is starting to come back as, during last night’s episode, the ageing hardman grilled Ben about the argument he had with Jay Brown in hospital.

Viewers of the BBC One soap know that Ben and Jay had a blazing row in Phil’s hospital room, where Ben confessed that he’d only returned to Walford to take his dad down.

Unfortunately – for Ben – Phil chose that exact moment to come out of his coma.

Luckily it didn’t happen a few minutes earlier when he was trying to cut off the machine that was keeping Phil alive. 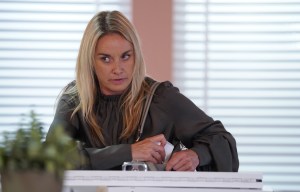 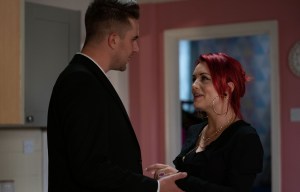 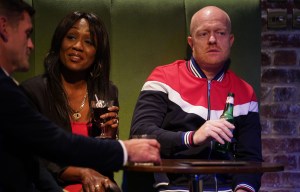 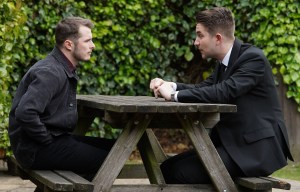 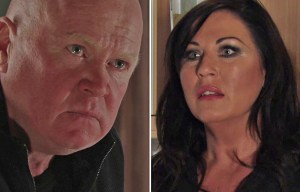 KAT'S OUT OF THE BAG

A panicked Ben  worried that Phil had heard what he’d said in hospital so tried to manipulate Phil and convince him that there was no argument.

He then rushed off to find Jay and warn him, but Phil had reached Jay first. Phil then grilled Jay about the argument, but Jay covered for Ben.

Later in the episode, after confessing to Shirley that he’d remember something, Phil shocked Kat – Jessie Wallace - by waiting for her in the kitchen.

The cleaner was forced to think fast when Phil remembered she was there the night he was attacked and, after taking the blame to save Stacey, Kat all but confirmed Ben was involved.

Ben had covered up Stacey's crime in an attempt to frame Keanu, but Kat's words made it sound like Ben orchestrated everything.
Breaking into the Slaters to confront Kat, Phil told her: "It's all come back to me, you laughing me at the Vic rubbing my nose in it for the 50 grand.
"And then we got back to The Arches, I had Martin pinned down and someone whacked me from behind. You tried to stone my head in. You cost me my daughter.
"You wrecked my family, you think I'm going to let you forget that."

But as he forced Kat to tell him what she meant by her not being to blame, he promised to spare her family from his rage if she spat it out.
And she did, dropping Ben right in it.

She told him: "That Ben of yours - he's only out for himself. Don't trust him."

Earlier Phil had tried to catch Ben out with lies with Jay after overhearing them rowing in the hospital.
Jay covered for him by telling him Ben had just broken down but didn't want to admit he was upset to his dad, but viewers know the truth.
But with Kat pointing the blame at Ben, viewers are now convinced Phil will go after Ben and decide to kill him after previously leaving him to get beaten up by homophobic thugs.
One wrote: "YES KAT! Pin it on Ben! Smart move that’s how the Slaters do it!"

Ighalo's agent confirmed that Manchester United are close to extending the player's loan until January
Celtic can sign Claudio Bravo, foster or Joe HART
Harry Kane: Tottenham must win 7-8 games to qualify for the Champions League
Jankauskas on Mourinho: Smart, witty and strong. First of all, the spirit
Balotelli wants Brescia to return him to the team or pay compensation. In the summer, the player will change clubs
Witzel on Sancho: He is one of the best players of his generation
Favre about Mike Sancho: I didn't see Anything – I can't judge. I don't know why he did it
Source https://www.thesun.co.uk/tvandshowbiz/9757687/eastenders-spoilers-phil-mitchell-ben-threatening-hospital/

Latest on lockdown lifting across the North-East, North Yorkshire and UK