A DURHAM University graduate will help people in the region sort their bonjours from their Buenos Dias after looking to set up a ‘Language Café’ to raise vital funds for refugees next month.

People in County Durham thinking of booking a holiday abroad next year but struggling with the language barrier could be helped when graduate Naomi Green sets up her unique fundraiser early in December after being inspired by a recent trip to South America.

Naomi, who graduated from Durham University earlier this year and is now employed as a staff volunteering administrator at the university, is organising the ‘Language Café’ event on Tuesday, December 7, to help people improve their speaking skills, with the proceeds going to North East charity, Action Foundation, which empowers refugees to overcome exclusion.

The Durham graduate had the idea for the fundraiser after spending eight months in Argentina’s capital as part of her undergraduate degree in Politics, Spanish and History. She found language cafes were a popular part of the nightlife in Buenos Aires.

Naomi said: “When I first moved to Buenos Aires it was a common thing. Lots of immigrants move there from all over the world and language cafes are a good way to meet people.

"There is an organisation called Mundo Lingo that would host free language exchange nights across the city at different bars.

Naomi during her time in Argentina where she regularly attended language events.

“You’d be given stickers for your native language and any other languages you spoke, and you would spot other people’s stickers and go over and mingle.

"You could find people to practise your language with, whether that was Mandarin or, in my case, Spanish, and you ended up meeting people that way and starting conversations.”

Naomi’s fundraiser for Action Foundation has come just at the right time, with the charity just announcing that they will launch a Christmas ‘Gift of Words’ campaign later this month, which will focus on raising £12,000 for Action Language, the charity’s ESOL teaching arm. 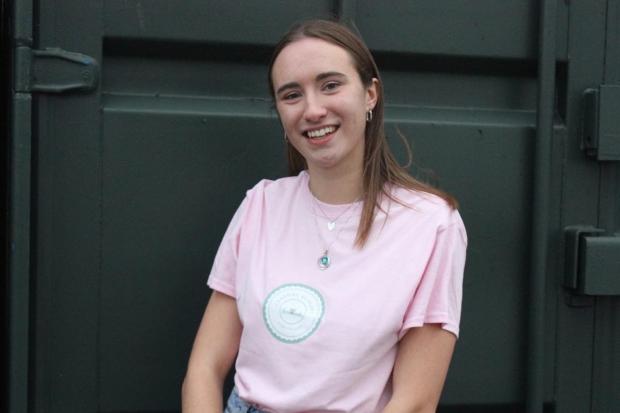 The Durham University graduate now works as a staff volunteering administrator, and will run the 'Language Cafe' at Alington House on North Bailey, in Durham city centre from 6pm on December 7.

She added: “I think the work Action Foundation is doing to combat social exclusion and support the integration of refugees and asylum seekers into North East communities is important, and educational institutions like Durham University can and should be playing a role in achieving this.”

Any level of language learning is acceptable at the event.

“I think everybody is in the same boat, everybody feels a little bit nervous, and you don’t have to start a conversation in your second language,” Naomi said.

READ MORE Much ado about Latin...school brings an ancient language to life

“Even if someone is fluent in one language, they probably have another they will struggle with. I speak very terrible German. But this is a laid-back event, and everyone’s welcome, no matter where they are on their language learning journey.”

Anyone interested in practising their language skills is invited to the Language Café event at Alington House on North Bailey, in Durham city centre from 6pm on December 7.

They’ll be able to talk to native-level speakers and other learners over a non-alcoholic Christmassy drink and buffet. Tickets cost £5, with all proceeds donated to Action Foundation.