A police officer was arrested by one of her own colleagues at a leaving do after getting drunk and using the N-word.

Molly Parr, 27, was banned from working as a PC on Tuesday after the incident, in which she also furiously told colleagues not to give money to a homeless man and had a violent bust-up with her boyfriend.

The misconduct hearing was told how Ms Parr was off-duty with colleagues at a force leaving do in Wales when she began drinking with other officers in September 2019.

She was heard shouting and being abusive towards a homeless man who was asking drinkers for money.

The officer is also alleged to have used racist and ‘foul and abusive language’ on the night out.

She was at a leaving do for colleague PC Jeffrey Smith in Cardiff’s Brewery Quarter in Cardiff when he realised ‘things were getting out of hand’.

PC Smith said he remembered hearing Ms Parr use the N-word on the night.

The hearing was also told about a ‘recording’ made on the night where Ms Parr can be heard saying the racist word.

Ms Parr – whose father is David Parr, the chief executive of Cheshire’s Halton Borough Council – moved from Manchester to Gwent to start her career as a police officer.

CCTV footage shown to the hearing sees Ms Parr and DC Kelly Perry stood chatting outside the Brewhouse bar at around 9pm.

A homeless man with a dog appears and asks people for any spare change before approaching Parr.

DC Perry said the homeless man appeared to have a ‘Birmingham accent’ and Parr said ‘he wasn’t from Wales’ and should ‘go back to where you came from’.

She added that the homeless man then responded by pointing out Parr’s Manchester accent.

DC Perry said: ‘I did feel uneasy and that her behaviour was inappropriate.’

She added that Parr had asked her about her behaviour outside and she replied that it wasn’t how she would have acted.

The hearing was told PC Samuel Smith was also drinking at the leaving do in September 2019 but later arrested Parr.

He told the hearing that ‘matters started to deteriorate after around 10pm’ and that he ‘placed himself on duty’ to arrest her.

The hearing was told there was ‘domestic incident’ involving Parr and her partner which was ‘not pleasant to view’. 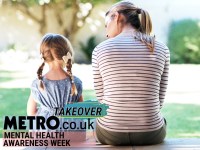 PC Smith said: ‘Parr was threatening violence to her partner and him to her.’

Parr was described as ‘heavily intoxicated’ before she was arrested for breach of the peace.

Presenting officer for Gwent Police Jonathan Walters said: ‘When you add up all of the actions of that evening it was gross misconduct.’

Federation representative Steve Thorpe said Parr, who did not attend the hearing, accepted her behaviour ‘fell below what was expected of her.’

The hearing was told Parr later resigned from Gwent Police and does not wish to rejoin any other force.

But she was dismissed from the force after she was found to have committed gross misconduct – and she was put on the banned list by the College of Policing.

Amanda Blakeman, Gwent Police’s deputy chief constable, said: ‘The behaviour of Molly Parr, a former Gwent Police officer, contradicts the high standards we expect of all our staff – whether on or off-duty. If she had not resigned from the force, she would have been dismissed.

‘There is no place for this type of behaviour, in particular the aggressive and offensive language used by the former officer, in Gwent Police

‘Even though she is a former officer of this force, it is right that we have continued with these proceedings.

‘The purpose of the police misconduct process is not just to hold officers, or former officers as with this case, to account for their actions; it is to maintain public confidence in the police service, uphold high standards, deter misconduct and protect the public.’

MORE : Police officer ‘had sex with drunk woman in car after offering to take her home’

G7 Speakers' Conference to be held in Chorley in September