As the men’s professional peloton pack up their hard-shell suitcases and head to Brittany this week for the start of the 108th Tour de France in Brest, those campaigning long and loud for a women’s race have finally been rewarded with the confirmation of a Tour de France Femmes, starting in July 2022.

Change, it seems, is finally afoot, even if at a snail’s pace. The women’s eight-day race will not quite overshadow the usual speculation over who will finish on the podium in Paris on 18 July, but it may help accelerate gender parity in a sport where diversity has long been a dirty word.

Fittingly, the opening act of the 2021 Tour will be La Course, the women’s event that has acted as the precursor to the Tour Femmes for the best part of a decade. The one-day women’s race remains little more than a tokenistic bolt-on, however, and has been shunted into an unsociable time slot next Saturday morning, before the opening stage of the men’s Tour.

Given the wet and windy forecast for the opening weekend in Brittany, the biggest question surrounding Geraint Thomas’s hopes of a second Tour de France victory may not be can he beat Slovenian prodigy and 2020 winner, Tadej Pogacar, but can the in-form Welshman stay upright?

Thomas’s tumbles have become something of a standing joke, which even he grudgingly acknowledges. This year has been no different, with minor crashes in the Tour of Romandie and in the Critérium du Dauphiné impeding his progress.

Most of the time, Thomas, Tour champion in 2018, dusts himself down and carries on fighting, just as he did to win in Romandie in May. But he will need those combative qualities in spades if he is to fend off not just Pogacar but a growing list of rivals, including the Vuelta a España champion, Primoz Roglic, the world road race champion, Julian Alaphilippe, and the Colombian duo Miguel Ángel López and Rigoberto Urán.

“You should not underestimate Geraint,” said his Ineos Grenadiers sports director, Servais Knaven. “When he’s at his best, he’s not inferior to Pogacar and Roglic. He is super-motivated. You could see that in the Tour de Romandie, which he won in an impressive way. He realises that it could be one of his last chances to compete for the overall victory [in the Tour].”

His stiffest challenge may come from within his own all-star team, with three pedigree stand-ins ready to assume leadership duties should Thomas fall or falter. First among these equals is Richard Carapaz, the Ecuadorian Giro d’Italia champion in 2019 and recent winner of the Tour of Switzerland.

Next comes the Australian veteran Richie Porte, winner of this year’s Critérium and third overall in last year’s Tour, while Hackney’s finest, Tao Geoghegan Hart, Giro winner in 2020 after Thomas crashed out, will also be ready to take on leadership if needed.

There is no doubt Thomas and his team are the strongest lineup in stage racing. Last year, as Egan Bernal struggled, the collective fell short of their great rivals Jumbo-Visma, who would have won the Tour through Roglic had it not been for Pogacar’s miraculous final time-trial performance at La Planche des Belles Filles. 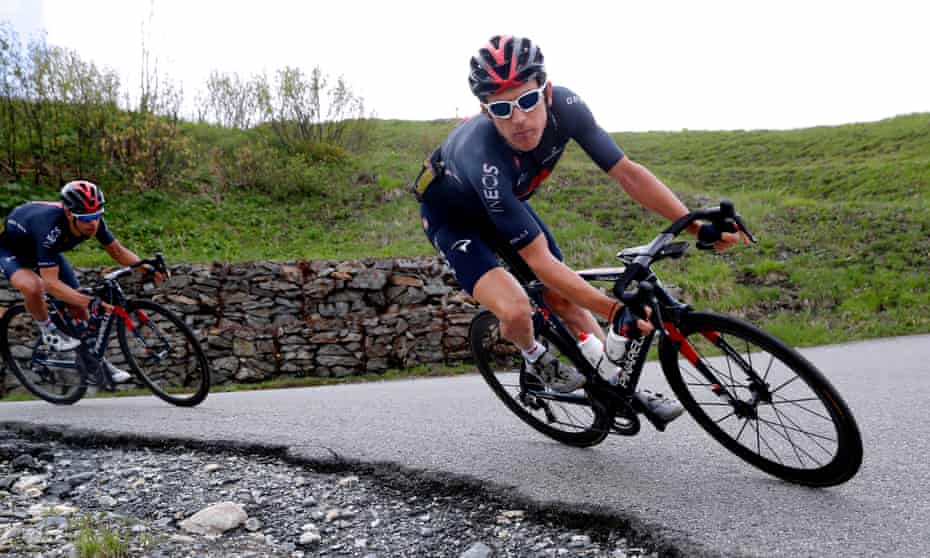 Geraint Thomas, Tour champion in 2018, ‘at his best is not inferior to Pogacar and Roglic’, according to Ineos Grenadiers director, Servais Knaven. Photograph: Bas Czerwinski/Getty Images

This year, however, Dave Brailsford’s team have been dominant, reprising the steamroller tactics that secured so many stage race wins in their previous incarnation as Team Sky. With Bernal’s overall win in this year’s Giro still fresh in the memory, it’s hard to see the British team failing to win yet another Grand Tour.

The fly in the embrocation, though, is the defending champion Pogacar, whose irrepressible and dynamic riding style appears almost uncontainable, however heavily he is marked during races. The 22-year-old has won three World Tour stages races and a coveted Classic, Liège-Bastogne-Liège, this year.

His UAE-Emirates team does not have the strength in depth that characterises Ineos Grenadiers or Jumbo-Visma, but, as Roglic learned last year, Pogacar’s unpredictability and attacking instincts more than compensate.

But if it is hard to see beyond Pogacar among those who might emerge from this volatile mix to claim victory in Paris, it is even harder to fathom the selection of a diminished Chris Froome by the Israel Start-Up Nation team.

The four-times Tour winner has been far off the pace this season, struggling to make to the top 50 in stage races. “I’m very much focused on just returning back to my former level and taking one step at a time,” he said in early June. “I don’t go from this level to winning the Tour de France.”

While there has been a recent and very marginal gain – he was 47th overall in the recent Critérium – the suggestion by the team that Froome would be their “road captain” to team leader, Michael Woods, has left many scratching their heads, given he has never performed this demanding role in the past.

His career, however, seems buoyed up by little more than goodwill after his horrendous crash in 2019, and the hope that, even at 36, he can have one final day in the sun. Froome remains defiant and determined and scoffs, as ever, at his disbelievers. “I’ve seen quite a lot of people on social media getting in touch and saying, ‘Listen, mate, hang up your bike. You’re done. You’re finished. You’re never going to get back there.’ And it just makes me laugh,” he said in May.

The most bitter pill for Froome may come on 7 July, when the peloton tackles an unprecedented double ascent of Mont Ventoux, scene of his spectacular solo win in 2013, which proved to be the foundation of his first Tour success. The fearsome Giant of Provence, usually ridden in furnace conditions, is no place for a rider in rehab, but the Ventoux’s steep slopes could suit the fearless and effervescent Pogacar down to the ground.