DONALD Trump Jr has shared a meme 'linking Bill Clinton and Jeffrey Epstein after bombshell documents claimed that the former President was on "Pedo Island".'

The president's son shared a superimposed poster for the 1970's TV series Fantasy Island that pictured both Clinton and Epstein.

⚠️Follow for the latest news and updates on Ghislaine Maxwell

The meme read: "Welcome to Fantasy Island. Their fantasy is your nightmare."

The posting comes just days after Jr called out Hillary Clinton for "staying silent" about the allegations surrounding her husband.

Trump Jr retweeted a news article reporting on recently unsealed court documents alleging that former president went to the island with "two young girls," and captioned the tweet: "Not hearing much of the usual sanctimonious bs from Killary today. Wonder why?"

Jr wrote: "I'm wondering why this isn't a bigger story myself. I see the two pictures of my father and this sick b***ard plastered all over the news every day.

"They are too wealthy guys from New York that ended up at the same party WOW SHOCKING! that’s where they live that’s what happens, but strangely the media will do anything to protect Bill Clinton and the other celebs that used to party and hang out with this guy all the time go to his shady island etc.

"That somehow is not newsworthy and it’s bulls**t. I also strangely never hear the fact that about 20 years ago [Epstein] was thrown out of Mar-a-Lago and told not to come back because allegations of his behavior surfaced.

"That is a long time ago and way before anyone else was onto this sicko but no mention of that… (I wonder why) and yet all the celebs that Epstein hung out with as recently as two or three years ago get a total pass (some like big name journalists and other celebs even hung out with him after he was a convicted pedophile) and we get fricken crickets form [sic] everyone of that.

"I think Ricky Gervais got it right about Hollywood. They were all friends with this guy."

On Friday, a Clinton spokesperson told Newsweek that the former president has "never been to Little St. James Island."

In unsealed legal documents, accuser Virginia Roberts Giuffre allegedly claims Clinton was a guest at Epstein’s private island in the US Virgin Islands.

Epstein joked about Clinton being in his pocket, she allegedly claimed in a conversation with her lawyers.

According to a transcript of the conversation, Giuffre said Epstein laughed and said: “Well, he owes me a favour.”

"He never told me what favours they were," Giuffre said. 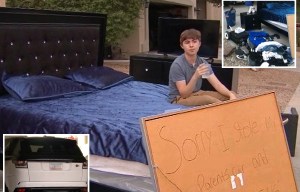 "I never knew. I didn’t know if he was serious. It was just a joke."

Clinton and the other visitors stayed in villas away from the main house, she added.

Sane will miss about two weeks due to a knee injury
Rostov will reject the offer of Genoa for Shomurodov, as they want more than 8 million euros (SE)
Mendes earned about 20 million euros during the summer transfer window
Carragher on Arsenal: Liverpool are a few years ahead, but Arteta can take them to the Champions League
Roma is the favorite in the fight for Jovic. Real Madrid have offers from Inter and Milan
Ruben Dias has arrived in Manchester to complete his move to city
Van Dijk's transfers are the key to Liverpool's victory. They killed any attempts of Arsenal to press
Source https://www.thesun.co.uk/news/12319726/donald-trump-jr-meme-bill-clinton-jeffrey-epstein-island/

'Unacceptable behaviour' Paramedic speaks out after being attacked

University teaching 'could finish early' to get students home for Christmas

Brits can get £5,000 for home improvements from tomorrow

Should there be a Welsh election in May next year for the Senedd?