SHE'S approaching her 75th birthday next year, and Dolly Parton has a whole lot to celebrate.

The singer has become one of the most legendary musicians across the globe following a true rags to riches story, boasting her own signature style, a stream of timeless songs and a loving husband who supports her.

And Dolly's showing no signs of slowing down either, with the Jolene singer not only set to star in new Netflix festive film Christmas on the Square, but also in talks to pose for Playboy.

With a new album in the works, she's now opened up to US talk show host Stephen Colbert about her career, revealing she likes to use her songs to "tell stories".

Dolly then went on to sing her own version of Bury Me Beneath the Willow Tree on the show - bringing the host to tears.

But her stardom hasn't come without hard work from the very start. Here we look at Dolly's incredible rise to fame and amazing life now...

'We slept three and four in a bed'

Dolly lived a very different life to the one she does now while growing up as the fourth of 12 children in a humble cabin in rural Tennessee, with parents Robert and Avie Lee Parton.

The family were very poor at the time, so much so that Dolly shared a bed with several of her siblings.

In one particularly honest interview with Playboy in 1978, the singer even said it came as a relief when someone wet the bed - because it would provide much-needed warmth.

According to Rolling Stone, she said: "The kids peed on me every night...

"There were so many of us. We slept three and four in the bed. I would wash every night, and as soon as I go to bed, the kids would wet on me and I’d have to get up in the morning and do the same thing.

"[But] that was the only warm thing we knew in the winter time. That was almost a pleasure - to get peed on - because it was so cold. Lord. It was as cold in the room as it was outside.”

The family also reportedly had to offer the doctor that delivered her a bag of oatmeal as payment, as it's all they could afford.

Dolly later set up a literacy charity, the Imagination Library, as a tribute to her father, who couldn't read and write.

She told The Sun: “I’m very proud of it. I established it in my home county because my dad couldn’t read or write. He lived long enough to see it start and I got him involved.

“He was so smart, so wonderful and such a good daddy but it was just crippling to him that he couldn’t read.”

While Dolly has a killer voice, she's also an expert when it comes to playing different instruments - with her often seen performing with as many as eight different ones on stage.

In an interview with Vogue in 2016, the reporter pointed out: "I saw you in Queens, and I think I saw you play eight instruments: dulcimer, banjo, guitar, piano, recorder, even saxophone."

To which Dolly said: "Oh, I play some of everything. I ain’t that good at none of it, but I try to sell it. I really try to lay into it."

Sure enough, Dolly has gone on to become the most honoured female country performer of all time, achieving a whopping 25 RIAA certified Gold, Platinum, and Multi-Platinum awards.

According to reports, her net worth is now thought to be as much as £383 million.

Iconic style inspired by 'the town tramp' - & why she wears wigs

Dolly has become equally as well known for her iconic, statement style over the years, with the singer often seen performing in colourful, tight and extreme ensembles on stage.

While talking about her cameo in TV movie Christmas of Many Colors: Circle of Love, Dolly said playing the 'Painted Lady' was simple for her.

"This lady was the town tramp and I thought she was the most beautiful person I'd ever seen when we were little kids," Parton told The New York Times.

"She's the lady that I actually patterned myself after because she left an impression."

She admitted she found out years later that her style idol was a prostitute.

Central to her style are her huge, statement wigs - with Dolly rarely, if ever, seen without them. However, she tends to go au natural at home behind closed doors.

She told Elle magazine in 2019: "I don’t always wear [wigs] in my daily life, but I always still pouf up my hair.

"I still like to have that flashy hair. When I’m around home, I wear my little scrunchies, but I always put on some makeup and fix my own hair as cute as I can fix it."

Dolly added that she chose to opt for wigs in public in the end due to the ease of them, and added: "Wigs are just so handy. I’m so busy, and I have so many choices. I never have a bad hair day, and that’s a good thing.”

Private marriage to husband and 'no regrets' over not having kids

Dolly has been with her husband Carl Thomas Dean for more than 50 years - and it was love at first sight.

“My first thought was I’m gonna marry that girl,” Dean said on Dolly's official website about the then 18-year-old singer, who he met outside a laundromat in Nashville.

“My second thought was, ‘Lord she’s good lookin.’ And that was the day my life began.”

The couple tied the knot on May 30, 1966 - and they're still as happy as ever now, even recently renewing their vows.

They keep their relationship out of the limelight, and Carl rarely accompanies Dolly to any events.

The pair chose not to have children and Dolly has said she has no regrets over the decision.

"God has a plan for everything. I think it probably was his plan for me not to have kids so everybody's kids could be mine. And they are now," she said in 2017 on TODAY.

Dolly has always been incredibly honest with her fans and in her book Dolly on Dolly, she admitted she once came close to suicide after a relationship she was having came to an end.

In the book, she says: "I was sitting upstairs in my bedroom one afternoon when I noticed in the night-stand drawer my gun that I keep for burglars. I looked at it a long time."

But she went on to explain that her dog stopped her from pulling the trigger - and she saw this as a sign from God.

She explained: "Then, just as I picked it up, just to hold it and look at it for a moment, our little dog Popeye came running up the stairs.

"The tap-tap-tap of his paws jolted me back to reality and I suddenly froze. I put the gun down. Then I prayed. I kinda believe Popeye was a spiritual messenger from God."

Dolly is godmother to a singer also born in Tennessee and who also commands the world stage . . . Miley Cyrus.

“I love Miley and I’m very proud of her,” she told The Sun. “She’s like one of my kids. Like all kids, they go through their times, have a right to make mistakes and grow up in their own way, according to their own personalities.

“Miley’s a good girl. She’s smart and she’s talented and I’ll always be on her side.”

She loves spending time alone in cemeteries for some peace and quiet, and often writes in them.

She once found a baby left in a box on her doorstep at her farm in Nashville, with a note saying she was named 'Jolene' and the parents wished for her to have the newborn. She immediately called child services.

She once lost a Dolly lookalike contest on Santa Monica Boulevard.

Her first crush was Johnny Cash.

She's so scared of roller coasters she's never ridden the rides at her own Dollywood.

Her famous song Jolene was written about a red-headed bank teller who used to flirt with her husband.

Dolly is now in talks to model for Playboy once again as she approaches her 75th birthday - but insists the sexy photos "will be in good taste".

Appearing on the Scott Mills & Chris Stark show on Radio 5 Live recently, she was asked it she was "planning to star on the cover of Playboy magazine". 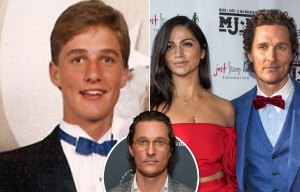 Matthew McConaughey was 'molested' at 18 and 'blackmailed' into losing virginity

She said: "Yeah, I just might do it, if I can do it in good taste and they want it [and] we'll do it along with a really good interview inside.

This wouldn't be the first time that the hitmaker has graced the magazine's cover, as she did so in 1978 while donning a classic black bunny suit.

Griezmann on Messi: I admire Leo, and he knows it. We have a great relationship
Rooney on the possibility of a move to Barca in the 2010/11 season: Thinking about it. Could fit in perfectly
Hooray, in England they will let the audience into the stands again! While up to 4 thousand and not everywhere, but the clubs are happy 😊
Solskjaer about the match with Istanbul: these are the Champions of Turkey, it will be difficult
Gasperini on the nomination for the best coach of the year award: If we beat Liverpool, maybe I'll get a few votes
Julian Nagelsmann: Leipzig want to give PSG that final feeling they are talking about
Tuchel Pro Champions League: Match with Leipzig - the final of our group
Source https://www.thesun.co.uk/tvandshowbiz/12984063/dolly-parton-husband-wigs-playboy-challenge-net-worth-childhood/