When Ma found her cancer was malignant, all the theatres went dark.

“Normally, when one gets bad news like this, one becomes the focus of attention, but in a pandemic, no one gives a fuck!”

Mum was ill so of course there was an apocalypse.

I became my mother’s carer, cooking, shopping, medicating and shuttling her to and from radio and chemo.

She refused to come and spend Easter with us despite being very weak. “All over the country people are choosing not to visit their families. I want to honour their sacrifice.” Then on Easter Sunday, our worst fear, she fell and fractured her spine. For the first time she complained of pain. Knowing Ma’s pain threshold this would be the equivalent of gratuitous medieval torture to you and me because she simply never complained about pain. “Apart from anything else, darling, it’s just so boring.” 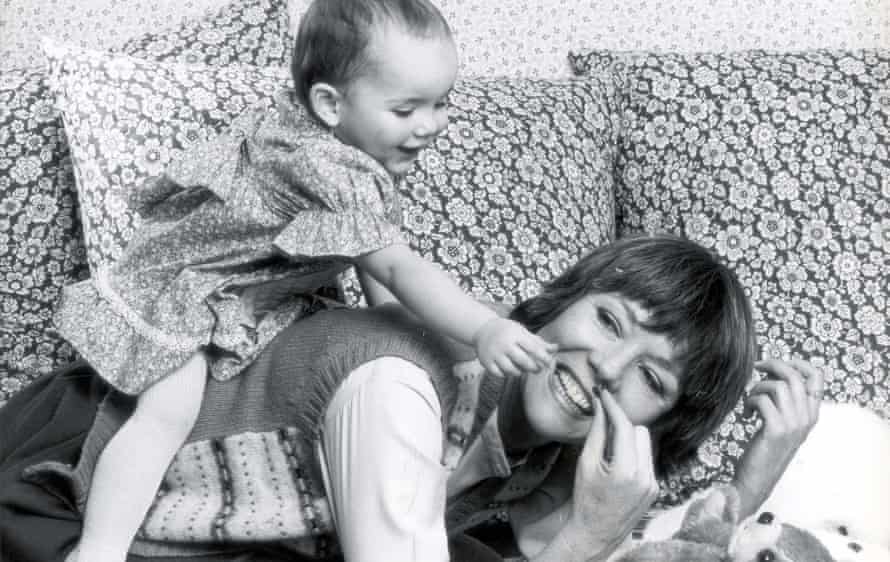 I took her into hospital. A fractured lumbar. And, we were told, the cancer was everywhere. I saw her face as the surgeon listed the procedures he was intending to perform on her and I knew she had no intention of enduring any more than she already had. She told the doctor what I already knew. He had the surname of a famous chutney so Ma simply called him “Lunch! Listen! Forgeddit! I’ve had enough!” She took him up on his offer of the hideously named cyberknife surgery, which was precise radiotherapy to the brain. She wanted to go out “with all my grey matter intact, thank you!”

So this she did and later that week I was organising an ambulance to bring her and her firing-on-all-cylinders grey matter home to die with me and my boys. She had to be persuaded. Not about the dying bit, she was resigned to that: “Oh but I’ve had such a life, Rachie!” She didn’t like the loss of independence, hated the thought of being a burden and flatly refused to use the doorbell that Guy had taped to her bedside table in case she needed help. She also refused morphine as it dulled her brain.

I had 30 alarms on my telephone for all the medications. She called me Nurse Ratched. 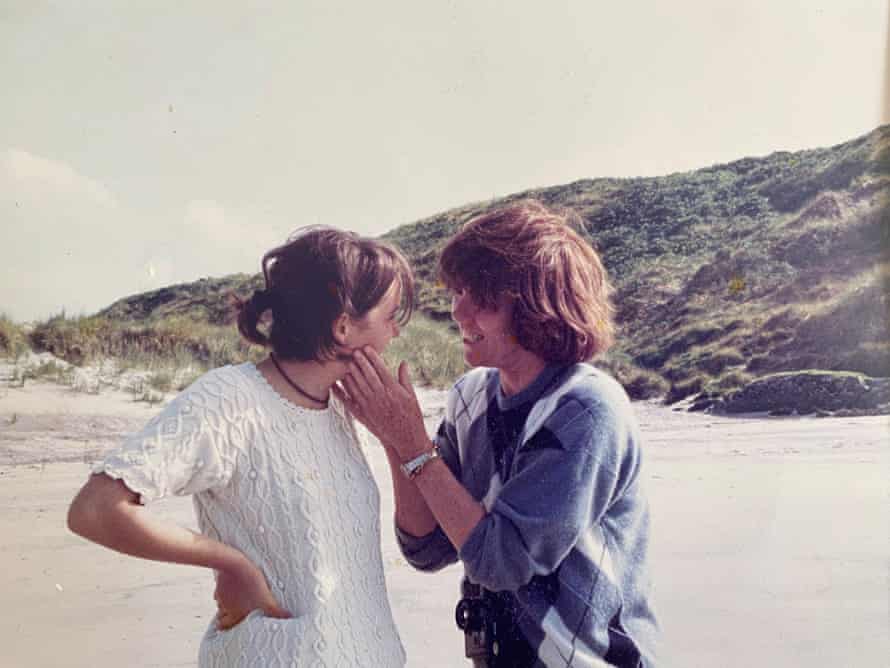 Rigg and Stirling in north-west Scotland in the early 90s. Photograph: Courtesy of Rachael Stirling

Dignity: the most important thing was to preserve her dignity, to make certain she was not in pain and to make sure she felt comfortable, safe and loved. We had Camparis at four o’clock in the afternoon, every afternoon, right up until the day she died. I organised visitors when allowed; half an hour was about enough before she’d give the signal to usher them out. We laughed all the time at the darkest of things of course. Death laughs are the best because nothing is off limits. I have a diary of her last six months that would make your eyeballs weep with laughter and wince with pain all at once. Though I can’t bear to look at it.

She wanted to fix things before she left, one of which was my beloved’s health. One day, when I had accidentally given her double steroids, she fondly patted my husband’s belly and said to him: “Guy! Tell me the truth! When was the last time you saw your willy?” To which he replied: “For reasons it wouldn’t be appropriate to share with my mother-in-law, I have no problem seeing my willy.” They howled. Mama and Guy fell in love. He could finish off the last line of an obscure sea shanty she remembered and they would sing old jazz numbers and recite poetry together. That was a glorious thing. “Rachie, has anyone ever written a script about a mother who goes to live with her daughter, but then the son-in-law falls in love with her because she’s much better in bed?” “No Ma, I don’t think they have. After all, said daughter would probably medicate aforementioned mother so she never got out of said bed, again.”

It wasn’t until I was at school that I really understood how famous my mother was. The lustful glint of recognition in the eyes of fathers at the school gate was the giveaway. A few years ago, I was stopped in the street by a neighbour who said: “I just want you to know I know how it feels; my mother was beautiful too.” 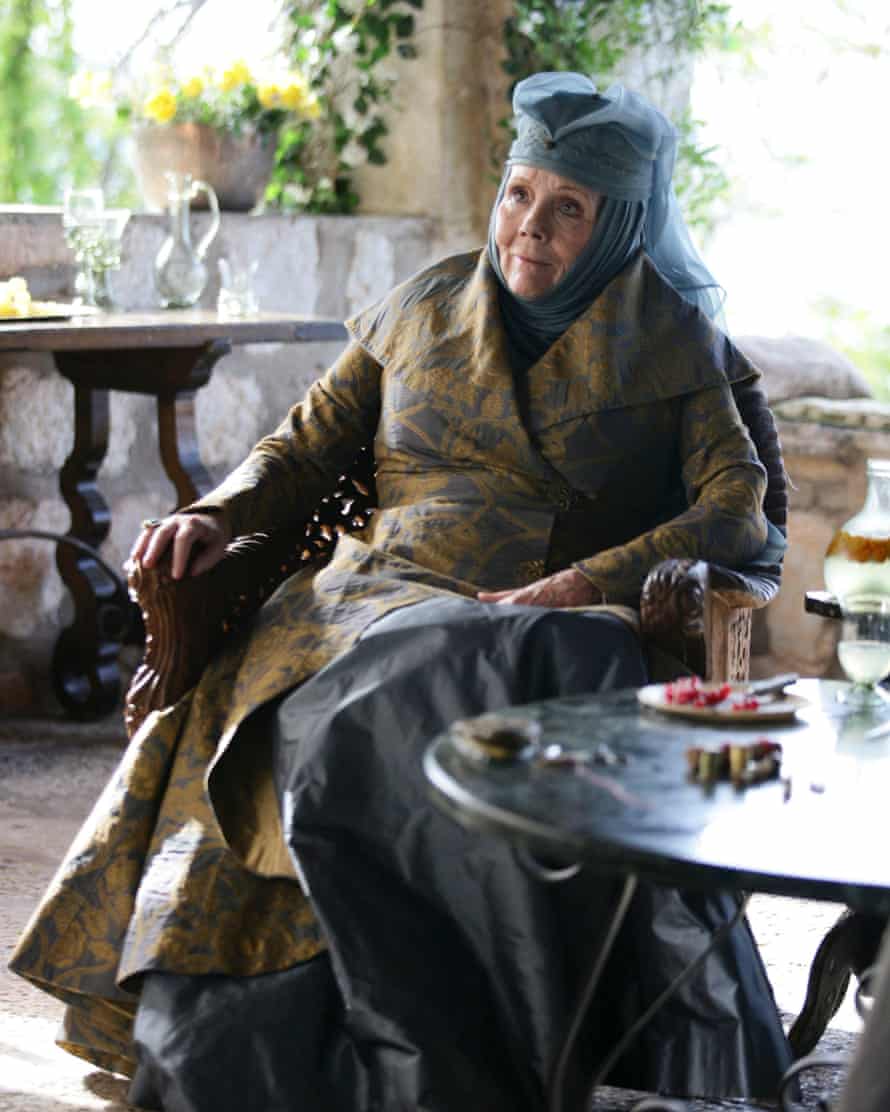 Rigg as Olenna Tyrell in Game of Thrones. Photograph: Sky/HBO/PA

I’ve always known I would never be a star like my mother. I’m a very happy working actress. I feel incredibly thankful for my lot. I did go to a few awkward auditions at the start of my career and not wanting to accept (or acknowledge) any nepotism, I would flatly deny being her daughter at all in the vain hope we might talk about something else. I looked enough like her for this to be an obvious and awkward fib. My poor agent was exasperated.

My Mother-Ship was the least complaining, most courageous woman I have ever or will ever know. She had not a trace of self-pity. She didn’t suffer fools; she exploded them at 50 paces. The callous doctor who, when asked by Ma how long she’d got, said: “If I had a pound for every time…” was swiftly rebuked with: “HOW FUCKING DARE YOU PATRONISE ME OR ANY DYING PERSON WITH THAT MEEEEEAAAAAANINGLESS PLATITUDE. GET OUT!” 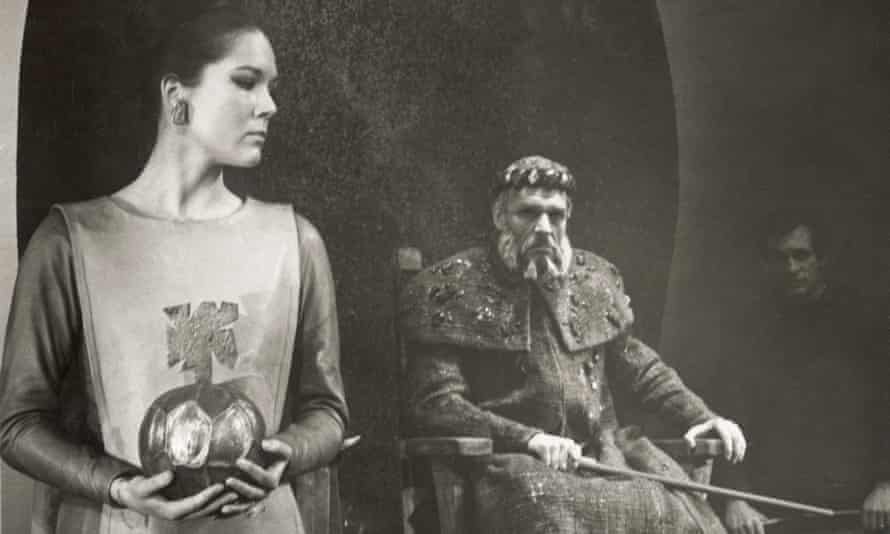 Rigg as Cordelia in an RSC production of King Lear with with Paul Scofield in the title role, directed by Peter Brook, 1962. Photograph: Photo by Angus McBean © RSC

Mama was a truth-teller. She loathed lies and liars more than anything on Earth. Being caught telling an untruth by my mother was one of life’s great humiliations. She would shame you to the core. Just like her secret daytime TV heroine, Judge Judy.

She was also Very Naughty. I can’t remember which poor actor it was that had to take her hand at the end of a play, after she’d copped it in the plot, and deliver a grief-stricken speech to the Corpse of Mother, but she had a warm wet frankfurter in her palm waiting for him.

Oh she was fun. One of her school reports reads “Diana has been tiresome in the dormitory”. Well, I went to boarding school and I can tell you this is code for “Diana was having too much fun”. 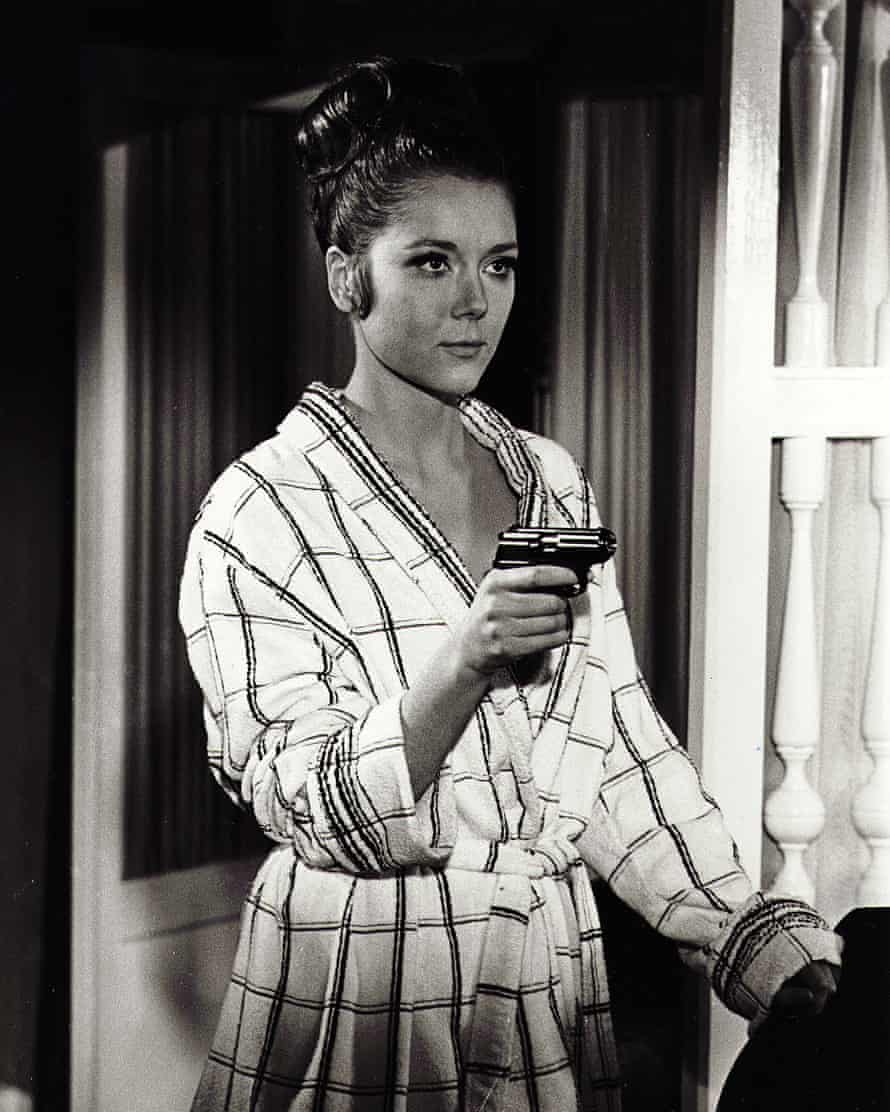 Rigg in On Her Majesty’s Secret Service, 1969. Photograph: Danjaq/Eon/UA/Kobal/Rex/Shutterstock

She once took a very recognisable national treasure to a sex shop. He had confessed to her that sex with his wife was on the wane so she took him to Soho, marched into the emporium and loudly instructed: “GRAB A BASKET, DEAR!”

She was always curious. Her mind was always engaged. She read prodigiously. She tested herself constantly; learning great swathes of poetry just to see if she could. She said to the Cyberknife man: “I shall be reciting Katherine’s speech at the end of Taming of the Shrew and if I get a word wrong I’ll know you’ve FUCKED it UP!” She was entirely self-educated, having been dropped off at one appalling boarding school after another.

She had projects on the go at all times. One was the idea of updating her book of actors’ gloriously bad theatrical reviews, No Turn Unstoned. I recently found another file with her notes on the history of the American theatre and its criticism, which she had started in New York a few years ago while doing 187 performances of My Fair Lady on Broadway. For her 80th birthday during the run she took over a bookstore in Lower Manhattan, invented a cocktail called Dame Diana’s Dynamite and boogied til dawn with all the hot young dancers. She was disgusted when she heard that the actress playing Eliza had decided to have Sundays off to be with her family. She made it known to a journalist and became persona non grata backstage. She didn’t give a hoot. If your name is on the billboard, you show up for every show. 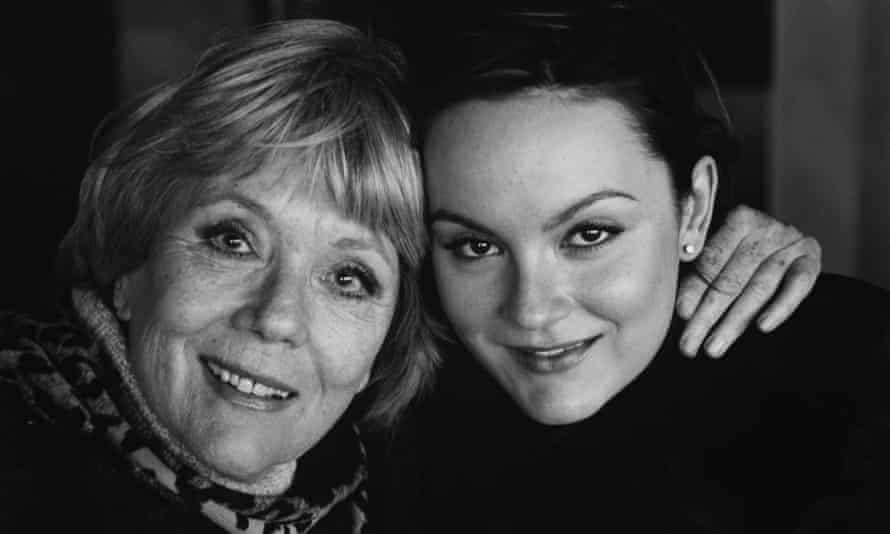 We didn’t always get on. There was enormous love, but it was a painful relationship for both of us at times. When we asked her to come and live with us, I had no idea how hard it would be or how traumatic. Yet it was the greatest privilege to help her to die as comfortably as I could and she returned that kindness with a stoicism that shielded me from her darkest moments. We showed each other a love without end, in the end. One day she said: “Rachie, it’s almost as if we are the same person.” And it was.

There is so much more to say; of her fervent belief in the right to die and the recordings we made at her request, where she stated her impassioned argument for dying with dignity. But that is for another day.

There can’t be many who experience going to a cinema to see their late parent in a hotly anticipated movie from a cult director. I was dreading seeing Last Night in Soho. I wasn’t sure I was ready to see her so full of life, and so recently. In the end, it was seeing her hands putting down a cup of tea that really broke me. I knew and loved every freckle there. I ran out of the cinema at the end to get tissues and there was Dear Edgar waiting to see what I thought. I think it’s magnificent; Mama’s Blackstar.

I’ve asked for a plaque to be put up for her in the actors church in Covent Garden. “Only benches left,” they said. “No one ever sat on my mother!” I said. I couldn’t sleep for thinking what to put on the thing, then suddenly it came to me:

France to suggest proposals for tackling the Channel migrant crisis