They came, they sang until their voices were raw and, as a flag draped from one of the top tiers reminded everyone, they did it all for Christian Eriksen. Beyond any footballing relevance, this occasion will hold its own place in Denmark’s history. It was the day a country came together in appreciation of its most important sporting figure of recent times; it was also a day when the singular joy of watching a football match, the smile on the face of the person next to you, the experience you share so deeply with loved ones and strangers for one intensely distilled portion of the day, came before anything else.

Denmark still craved a result and they richly deserved one, only to be outdone by a performance of devastating quality by the Belgium substitute Kevin De Bruyne after Yussuf Poulsen had scored early on. Their participation in Euro 2020 hangs by a thread, although an outing of this ferocity against Russia, should they possibly have another in them, would raise the hope they can still achieve the impossible.

“Hele Danmark er med dig, Christian” (All of Denmark is with you, Christian) read the banner that unfurled behind Kasper Schmeichel’s goal when, as trailed, proceedings halted with thunderous applause at the 10 minute mark. Schmeichel embraced his captain, Simon Kjær; a few yards away Romelu Lukaku, Eriksen’s clubmate at Internazionale, hugged Thomas Delaney and lumps sat up in throats on all four sides of the ground. The love pulsated around Parken and, from his hospital room a stone’s throw away, Eriksen will have been in little doubt of that. The noise generated by the supporters felt like that of at least twice the number and had maintained a staggering pitch ever since the players emerged. It had been ratcheted even higher by the thundering intensity with which Denmark began the game.

Toby Alderweireld and Dries Mertens had temporarily missed the memo that, for that show of appreciation, the ball would be spirited out of play. They were quickly forgiven and, besides, Belgium could be forgiven some disorientation. Nobody knew how Denmark would respond to the scene of Saturday’s trauma but the answer was served up straight after kick-off: they tore into Belgium like men possessed, every tackler that bit more convinced of his right to win the ball and every runner those few per cent harder to shrug off. When the pause came they could have been three up, but the one they managed was special enough. 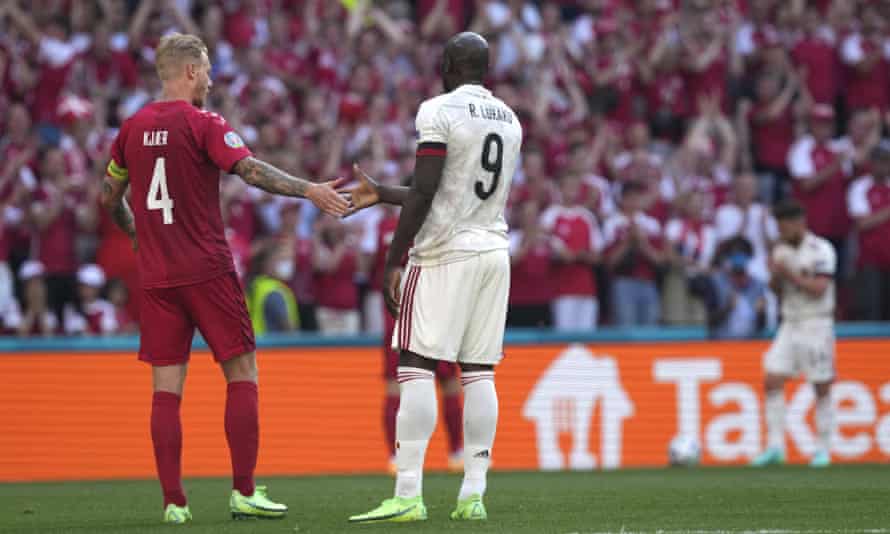 It arrived after 99 seconds when Jason Denayer, trying to play from the back, presented the ball straight to Pierre-Emile Højbjerg. A smart pass forward later, and Poulsen was in, making no mistake with a drilled finish across Thibaut Courtois. Poulsen wheeled away towards the corner where, five days previously, he and his teammates had formed a protective ring around the stricken Eriksen. The entire side joined him; the celebrations on the touchline and in the stands, prolonged and raucous, were a national moment of catharsis.

For the statisticians, Poulsen had just scored the second fastest goal in European Championship history. But this was an occasion for the soul; not one that would be predicated on structures, figures, or any fact other than the statement that Eriksen was alive and relatively well. The entire day had assumed a heady, dreamlike state from an early hour: Saturday had been framed as the start of a sun-bleached summer free of most Covid-19 restrictions in Denmark until events took such a horrifying turn; now, under electric blue skies, everyone could go once more with all kinds of added, extra-special feelings.

And they did. Fans of both stripes had mingled since the late morning in Nyhavn, Copenhagen’s canal district, chanting Eriksen’s name and signing a nearby mural that will later be presented to him. “Belgium loves you Christian,” said one flag, which later found its way into the ground. Red shirts congregated in the green space around Parken and, this time, friends clasped each other in excitement rather than horror-induced empathy.

What a marvel it was that their team produced a first half of such relentless tempo. Joakim Mæhle, Daniel Wass and Martin Braithwaite could all have doubled the lead before Mikkel Damsgaard, a 20-year-old winger who effectively assumed Eriksen’s starting role, embarked upon a slalom run of which his absent colleague would have been proud. Damsgaard slid his shot just wide but Belgium had, for 45 minutes, been reduced to waxworks.

Roberto Martinez had stressed his side needed to be in business mode; in a huddle before kick-off, Lukaku could be seen making similar exhortations.

An atmosphere this fervent was always going to pose the visiting side problems. De Bruyne was introduced at the interval in a bid to impose order, and it was not long before his impact told. A 50-yard burst down the right from the hitherto quiet Lukaku resulted in a pullback to the surging substitute, whose touch and instantaneous pass left gave Thorgan Hazard an unmissable chance.

Axel Witsel and Eden Hazard quickly arrived too. It was clear Martinez felt Denmark, their energy levels having taken a hit with that equaliser, could be picked off from here. He was not wrong. The winning goal was swept in brilliantly by De Bruyne’s left foot after Eden Hazard had completed the final pass of an intricate rat-a-tat.

Thrillingly, Denmark fought back. Courtois saved brilliantly from Braithwaite and, near the end, the Barcelona forward clipped the bar. They fell to their knees at the end, but this was a day to stand tall.