PROTESTS erupted in Minnesota for a third straight night as hundreds of demonstrators clashed with police following the police shooting of 20-year-old Daunte Wright.

People flashbanged and threw fireworks, bottles, bricks among other airmail at police in Brooklyn Center, where 25-year veteran officer Kim Potter shot and killed Wright during a traffic stop on Sunday.

Following a rally outside the county's police department, demonstrators marched to FBI headquarters and remained peaceful into 7PM as people listened to speakers.

As it neared the 10PM curfew imposed in Brooklyn Center, police told protesters over a loudspeaker they have 10 minutes to leave the area as assembly was unlawful.

The curfew is in effect until 6AM Wednesday.

Police put barricades around the police headquarters just as the Minnesota National Guard were brought in for additional numbers.

People chanted "Hands Up," "Say his name," "No Justice No Peace" among other chants.

Some graffitied buildings with "Black Lives Matter" while others marched through the streets as police pushed them away.

The increased security comes after 34 people were arrested for protesting the shooting of a Black man by a white officer, just 11 miles from where George Floyd was killed by Officer Derek Chauvin less than a year ago.

Wright was killed when Porter thought she had grabbed her taser to stop Wright from fleeing a traffic stop.

Porter and Brooklyn Center Police Chief Tim Gannon have since resigned from their jobs. 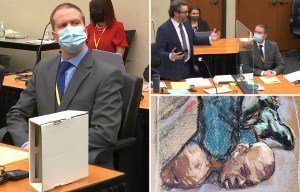 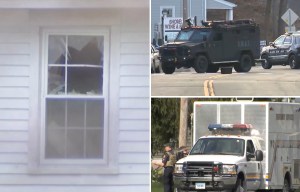