Could Scotland leave the UK... and stay in the EU? 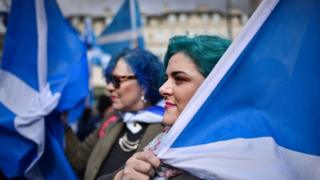 A second referendum on Scottish independence should be held in 2020, Scotland's First Minister Nicola Sturgeon says.

The SNP's goal is for Scotland to leave the United Kingdom and rejoin the EU as an independent member state. But how could this happen?

Why is Scottish independence back in the spotlight?

Scotland held an independence referendum in September 2014, with the No campaign winning 55% of the votes.

The SNP saw this as a "material change in circumstances" which would justify a second independence ballot, because Scotland faced being taken out of the EU "against its will".

And the party has since performed strongly in elections. It won 48 of the 59 seats north of the border in last week's general election, while campaigning to "put Scotland's future in Scotland's hands".

Does Scotland have the power to hold a referendum?

There has long been legal debate over whether the Scottish Parliament, rather than MPs at Westminster, could pass the laws needed for a new vote on independence to be held - but the matter has never been tested in court.

In any case, Ms Sturgeon wants the UK government to agree a transfer of powers allowing a referendum to be held, as happened in 2014.

Ms Sturgeon, the SNP leader, says this would ensure the referendum result was seen as being entirely legal and legitimate, particularly by the EU.

But despite the SNP's election success, Prime Minister Boris Johnson says he remains opposed to a second referendum - with senior government figures including Michael Gove saying there will be no vote on independence within at least the next five years.

What if Boris Johnson says no?

The first minister's position is that Mr Johnson and the Conservatives may "rage against reality" for a while, but will ultimately have to give in to "democracy".

She has warned that "you can't hold Scotland in the union against its will".

If these political arguments do not budge Mr Johnson, the first minister has not ruled out taking him to court. This route carries risks, as success is not guaranteed and it could take up valuable time, but some in the SNP are keen.

One thing Ms Sturgeon has ruled out is an unauthorised vote. She says the example of Catalonia proves this "does not lead to independence".

Her other option might be to target a really big win in the Scottish Parliament elections in 2021, on an explicit platform of demanding a referendum, to increase pressure on the UK government.

Would Scots vote for independence?

This is the big question - after all Nicola Sturgeon doesn't just want to hold a referendum, she wants to win one.

Polling data collected by What Scotland Thinks suggests an increase in support for independence - but it generally remains just short of a majority.

The SNP hopes that a combination of Brexit and hostility within Scotland to Mr Johnson will start to push the dial further in its direction.

Would an independent Scotland stay in the EU?

In practice, Scotland would not become independent the day after a Yes vote - there would have to be a period of transition.

In 2014, the pro-independence side said it would take 18 months to set up an independent Scottish state.

Even if a referendum was held tomorrow, the transition would therefore run beyond the end of 2020 - when the UK is due to complete its exit from the EU.

This means Scotland would leave the EU with the rest of the UK, and would need to apply to join again.

Scottish ministers accept they would have to go through an "accession process" for EU membership, but want to start this "as soon as possible".

What would it take for Scotland to rejoin the EU?

Scotland would have to jump through the same hoops as any state seeking to join the EU, although it would have the advantage of having recently been a member.

The accession criteria throw up a whole series of questions about things like currency, deficit levels and borders.

Ms Sturgeon has been pressed on many of these topics already, arguing that Scotland could initially continue to use the pound and would not need to join the euro. She says the country's financial position could be brought within EU rules by growing the economy.

However, her own party's prospectus for independence suggests this could take several years, whereas she wants to rejoin the EU as quickly as possible.

The first minister also wants to avoid a hard border between Scotland and England.

She has said answers about this and a whole range of other questions will be set out in detail ahead of any vote.

Kely Nascimento-DeLuca: 'If there's a time to use Pelé's name it's for something like this'

How to receive eye care during Covid-19 pandemic

How Covid-19 started, spread and brought the world to its knees

Our 'return to normal' could be six months away, says Government doctor

'Probably the worst year in a century': the environmental toll of 2019

Why is the Belarus Premier League still playing despite coronavirus, and what fixtures are on this week?

Gundogan gives verdict on whether Liverpool should be given title

It could be six months before we can return to normal

Man fined for being drunk outside

Boy, 13, opens pantry outside home for elderly people during coronavirus

Pelosi blasts Trump’s ‘deadly’ response to coronavirus and says ‘as the president fiddles, people are dying’

Nazanin Zaghari-Ratcliffe under consideration for clemency

What happened in the government’s coronavirus press conference today?

Inside the rise of Burnley's Nick Pope: From non-league to being wanted by Chelsea

"We anticipate our numbers will get worse over next week"

Cristiano Ronaldo ‘splashes out £8.5m on limited edition Bugatti Centodieci’ – one of only ten models ever created