Donald Trump was warned at the end of January by one of his top White House advisers that coronavirus had the potential to kill hundreds of thousands of Americans and derail the US economy, unless tough action were taken immediately, new memos have revealed. 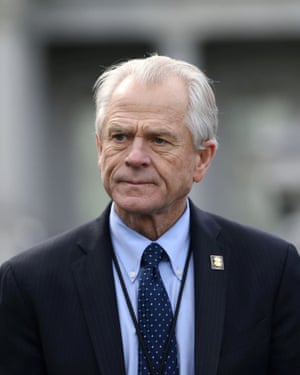 The memos were written by Trump’s economic adviser Peter Navarro and circulated via the National Security Council widely around the White House and federal agencies. They show that even within the Trump administration alarm bells were ringing loudly by late January, at a time when the president was consistently downplaying the threat of Covid-19.

The memos, first reported by the New York Times and Axios, were written by Navarro on 29 January and 23 February. The first memo, composed on the day Trump set up a White House coronavirus task force, gave a worst-case scenario of the virus killing more than half a million Americans.

According to the Times, it said: “The lack of immune protection or an existing cure or vaccine would leave Americans defenseless in the case of a full-blown coronavirus outbreak on US soil. This lack of protection elevates the risk of the coronavirus evolving into a full-blown pandemic, imperiling the lives of millions of Americans.”

The second memo went even further, predicting that a Covid-19 pandemic, left unchecked, could kill 1.2m Americans and infect as many as 100m.

This was not the first time Trump and his White House team were warned that the virus had the potential to devastate the US and needed to be dealt with quickly and firmly. Senior scientists, epidemiologists, and health emergency experts in the US and around the world delivered that message clearly early on in the crisis, only for Trump to continue belittling the scale of the threat which he compared falsely to the dangers of seasonal flu.

But the emergence of the memos from such a senior aide within the White House will make it much more difficult for Trump to claim – as he has done on multiple occasions – that nobody was able to predict the severity of the disease. As the pandemic has swept across the country, the president has come under mounting criticism for having done too little, too late in response, leading to mass shortages of diagnostic testing, protective gear for frontline health workers and ventilators for the very sick.

ESPN reporter: Arsenal did not offer Aubameyang a new contract
Lucas Vasquez: Real Madrid have 11 finals ahead of them. I hope we can win the title
Liverpool confirmed that they will finish the season in New Balance
Zlatan will return to Italy on Wednesday or Thursday for a routine check-up with doctors in Milan
Manchester United will try to buy Sterling if he leaves city. In the short list United – Sancho, Grealish and Rodon (The Independent)
Liverpool players got down on one knee in memory of the deceased Floyd George
Rangnick can really change Milan. His philosophy is beautiful and takes root in all countries
Source https://www.theguardian.com/us-news/live/2020/apr/07/coronavirus-us-live-donald-trump-pandemic-likely-january-latest-news-updates

Inside the NHS wobble rooms where nurses and doctors go to cry, scream and shout while treating Covid patients