<p>Boris Johnson’s new tier strategy has come under take from some Tory backbenchers.&nbsp;</p>

Communities secretary Robert Jenrick has suggested that some areas in England could see their tier level lowered before Christmas, amid a growing rebellion from Tory backbenchers against the country’s new tier system.

The rebellion comes after it was announced on Thursday that 99 per cent of people in England live in areas to be placed in tiers two or three - the two strictest levels - from 2 December when lockdown lifts.

In response to concerns, Mr Jenrick told the BBC on Friday that “there is every reason to believe" that some areas in England could have restrictions eased in a review of the tier allocations in mid-December.

Earlier, Steve Baker, the prominent Brexiteer, had described the government’s policies as “truly appalling”, while the influential Graham Brady said they were “far too authoritarian”.

As many as 70 Tory MPs could vote against the new coronavirus legislation next week, the Daily Mail has reported.

survivors of the 1984 Bhopal gas disaster are six times more prone to Covid-19 infections and account for more than half of the total coronavirus deaths in the capital city of Madhya Pradesh in India, reports Stuti Mishra: 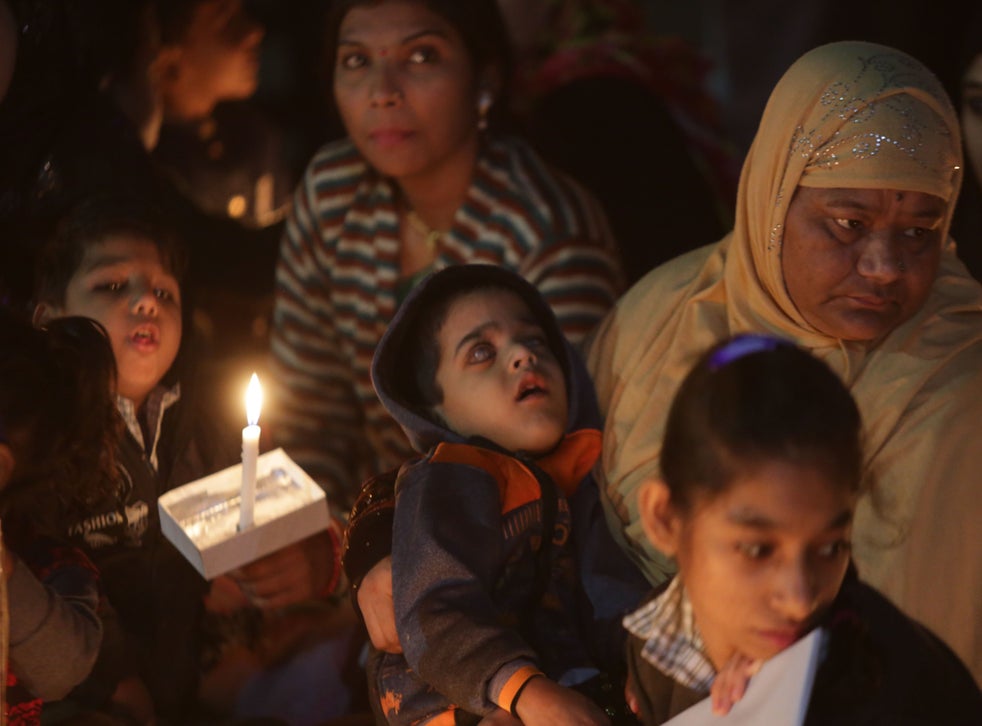 Coronavirus has provided fresh tragedy for the city devastated by a gas disaster, reports Stuti Mishra

The chief of staff at Houston's United Memorial Center has said a surge of infections over the Thanksgiving and Christmas holidays may push hospitals to breaking point, warning America could face its "darkest days" in modern medical history. Matt Mathers reports:

‘I know that a lot of people are going to get sick after Thanksgiving’, says doctor

Further national restrictions will come into force across Wales to limit the spread of coronavirus, first minister Mark Drakeford has announced.

Mr Drakeford said the ground gained during the country's 17-day firebreak lockdown was "being eroded", with the national incidence rate rising to 187 cases per 100,000 people.

He said the hospital system in Wales was under "sustained pressure", with more than 1,700 people with Covid-19 being treated.

"As much headroom as possible" was needed in advance of the Christmas period, when restrictions agreed across the UK will allow three households to meet for five days.

He said Northern Ireland was beginning a new two-week lockdown, and Scotland was extending the highest level of restrictions there.

"We, too now, here in Wales need to use the coming weeks to reduce the spread of the virus and create more headroom for the Christmas period," Mr Drakeford said.

Philip Green’s Arcadia Group could be heading into administration, after the majority of its 500 stores across the UK had to close because of coronavirus restrictions.

The group is attempting to secure a £30 million loan from lenders to help it through the economic emergency.

If these emergency talks fail, 15,000 jobs at brands including Topshop and Dorothy Perkins could be at risk.

Arcadia could go into administration by as early as Monday, according to Sky News.

Thailand has secured 26 million doses of the Oxford Covid-19 vaccine from the pharmaceutical company AstraZeneca for £58.9 million.

Given that this vaccine requires two doses per person, the agreement will cover 13 million out of the country’s 69 million people.

The expected delivery date is in mid-2021.

At the signing of the non-refundable contract, Thai prime minister Prayuth Chan-ocha said: “We have followed the vaccine manufacturers globally but this group has achieved very high progress.”

The NHS is appealing to coronavirus survivors to donate their plasma, as the high level of antibodies found in their blood could be used to help other patients recover from the disease.

Stephen Craib, who recovered from the virus, said: “If the antibodies are there, why wouldn’t I come back? Until the antibody level dropped to the level that they’re no longer required, I’ll keep coming."

Five per cent of recovered patients have so far donated plasma, according to the NHS.

As Covid-19 cases continue to surge in Russia, the country’s defence minister Sergei Shoigu annnounced plans to vaccinate more than 400,000 members of the military against Covid-19.

His announcement came as Russia reported a record 27,543 new infections.

On Friday, it was revealed that 100 million doses of Russia’s Sputnik V coronavirus vaccine will be produced by the Indian drug company Hetero.

Professor John Edmunds, a member of the government's Scientific Advisory Group for Emergencies (Sage), has emphasised that regions in England are unlike to change tier before Christmas.

His warning on Friday was at odds with the optimism of communities secretary Robert Jenrick, who said that “there is every reason to believe" tiers could be lowered before 25 December.

Referring to the first review of the new tier system scheduled for mid-December, Prof Edmunds told the BBC Radio 4 Today programme: "For me I think that is quite an early review stage. I can't imagine there will be huge changes at that point just simply because I don't think we will have accumulated much data by then."

Sudan’s last democratically elected prime minister, who was ousted from power in a 1989 coup, has died of coronavirus.

Sadiq al-Mahdi’s party confirmed that he had died at the age of 84 on Thursday in a hospital in the United Arab Emirates, following a positive test result for Covid-19 at the end of October.

Mr al-Mahdi’s successor Omar al-Bashir came to power in an Islamist-backed coup, before being toppled last year after ruling the country for 30 years.

The chief executive of pharmaceutical giant AstraZeneca has said that the Covid-19 vaccine it has developed with Oxford University will require “an additional study”.

Mr Soriot said another study would be necessary to “validate” the better efficacy rate, according to the Bloomberg news agency.

However, he added that this will probably not delay regulatory approval for the vaccine in the UK and EU.

Golovin about the nickname Tsar: Nothing more than a joke. This is necessary for the media and fans, but I am a football player
David De Gea: I try to be a leader for Manchester United. I have the experience of winning big titles here
It feels like we've been working together for 10 years! Chelsea stars say goodbye to Lampard
Bayern Munich have signed former Basel striker Oberlen
Tuchel will sign a contract with Chelsea for 1.5 years (David Ornstein)
Barcelona still owes Liverpool about 29 million euros for the transfer of Coutinho
Immobile on last season: Lazio felt invincible before covid. They could have fought for the scudetto
Source https://www.independent.co.uk/news/health/coronavirus-uk-news-live-tier-cases-update-b1762635.html