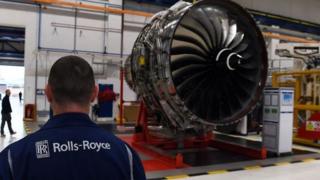 Rolls-Royce is considering tapping investors for £2.5bn to boost its finances as coronavirus continues to wreak havoc on global travel.

The firm, which makes engines for planes, said it is "evaluating" raising the sum and is looking at a number of options including a rights issue.

Rolls-Royce has previously said it does not expect demand to return to pre-pandemic levels for five years.

It has already announced 9,000 job cuts as part of a major restructure.

The Financial Times first reported that Rolls-Royce was considering raising £2.5bn and is in talks with a number of sovereign wealth funds including Singapore's GIC.

The company said: "We continue to review all funding options to enhance balance sheet resilience and strength.

"Amongst other options, we are evaluating the merits of raising equity of up to £2.5bn, through a variety of structures including a rights issue and potentially other forms of equity issuance. Our review also includes new debt issuance."

It added that no final decisions have been taken "as to whether or when to proceed with any of these options or as to the precise amount that may be raised".

The government holds a "golden share" in Rolls-Royce which prevents the company - which is deemed to be of strategic interest to the UK - from coming under foreign control.

In August, Rolls-Royce announced a record £5.4bn loss for the first half of its financial year.

The global travel industry has ground to a virtual halt because of the pandemic. Hopes of a pick-up in activity have been dashed due to changes in which countries are on a quarantine list that require travellers to the UK to self-isolate.

Under a "power by hour" model, Rolls-Royce makes money every time a plane using one of its engines is flown. It generates around £4bn a year through this model.

However, it expects flying hours to halve for this financial year.

Some 3,000 jobs are being cut in the UK and it is reducing the number of its sites worldwide from 11 to six, including the closure of factories in Nottinghamshire and Lancashire.

It hopes a restructure of its civil aerospace division will result in savings of over £1.3bn by the end of 2022.

Rolls-Royce is also aiming to raise more than £2bn through selling off parts of the group, including its ITP Aero turbine-making business in Spain.

Last month, the company finalised a £2bn loan which was partly backed by UK Export Finance, a government agency.

While Rolls-Royce's civil aerospace business has been impacted by the pandemic, the company said its defence division remains resilient and in its most recent results, reported a 2% rise in revenues.

Miranchuk and Krykhovyak are the best Loko players in the match against Bayern according to Bild, CHorluka and Murilo are the worst
Salzburg coach about the Champions League: we deserved more than one point in two games
With Lukaku, it is useless to play in a power struggle. Shakhtar defender Bondar on the Inter forward
Ivanov will serve the match OF AZ-Rijeka in the Europa League. Rotor appealed his refereeing in the game with Loko
Gasperini on Ajax: it's not easy for everyone Against them. Atalanta made a great comeback
Real Madrid came away from defeat for the 8th time in a Champions League match, losing by 2 goals. The club has updated its record
Felix on red Bull's double: I enjoy playing in the Champions League the Most
Source https://www.bbc.co.uk/news/business-54223864