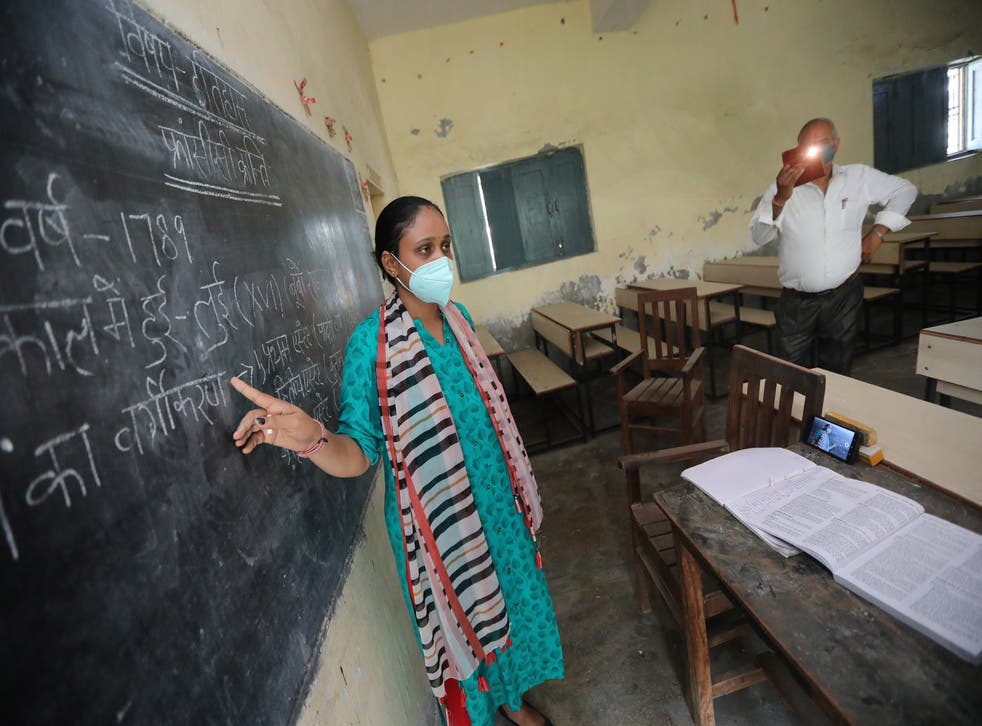 FILE. Indian school teacher at Gandhi Smarak school in Raghunathpur records a history lesson via mobile phone for students at the school on the outskirts of New Delhi

India is facing mounting calls to reopen schools, which have largely been closed throughout the pandemic since March 2020, resulting in many pupils dropping out altogether. At least 50 leading academics have now written an open letter calling for a rethink, saying “this break from schools will push us back by decades”.

Meanwhile, the IMF chief Geeta Gopinath, while explaining the agency’s decision to lower the economic growth projection for India, said the country had suffered a “catastrophic” second wave. And in terms of economic recovery, “looking forward, we have a very modest recovery as we think the [consumer] confidence will not come back as strongly as it did after the first wave.”

Etihad Airways has announced that it will stop all flights from India to the UAE until further notice. A spokesperson however clarified that “UAE nationals, diplomatic missions, official delegations and Golden residence holders are exempted from the UAE entry restriction.”

Myanmar could become a super-spreader state, the UN special rapporteur for the country has warned. Tom Andrews also urged for a ceasefire amid fears that Covid might spread to far and wider regions in the country.

And after a report that antibodies from Pfizer shots wane over a period of time after full vaccination, the company has implied that a booster dose could help improve immunity — even though scientists have not yet concluded whether a third shot will be needed.

Good morning and welcome to The Independent’s live blog on the coronavirus pandemic for Thursday 29 July 2021.

Carlo Ancelotti: Hazard is not at the level that we would like to see. It is not easy for him to play 2 matches in a row
Laporte was offered to sell Fati in the summer to register Messi. The president of Barca refused
Ronald Koeman: I wanted to go to Barca, but I didn't expect such problems. I am struggling and I do not regret that I came
Ronaldo got into the start of Manchester United in all 3 games after the transfer. He will play with West Ham from the first minutes
Golovin scored for the first time this season in Ligue 1, making an effective action in the 2nd game in a row
Messi and his family can move to a castle near Paris. The building is estimated at 48 million euros
Varan about Ronaldo: The best example of a winning mentality in the world. He works admirably

Liverpool's oldest businesses that sit at the heart of the city

Urgent hunt for boy, 13, not seen for two days

Who is Adele’s boyfriend Rich Paul?

Vigil: What would really happen if someone was murdered on a submarine?

How well do you really know Liverpool? Take our quiz to find out

Pensioner dies one month after serious crash on Scots road

Why this East Yorkshire house is Britain's dream home

Why Scott McTominay starts for Manchester United vs West Ham

Coronavirus infection rates, cases and deaths for all parts of Wales on Sunday, September 19

France's Macron to talk to Biden amid crisis over submarines