Experts are warning the planned relaxation of coronavirus restrictions over Christmas could lead to a third wave of the pandemic, after the UK’s four nations agreed three households would be allowed to mix in a bubble for five days over the festive period.

Professor Andrew Hayward, a member of the government’s Scientific Advisory Group for Emergencies (Sage), told BBC’s Newsnight “it will definitely lead to increased transmission”, adding: “It is likely to lead to a third wave of infection, with hospitals being overrun, and more unnecessary deaths.”

He also described the bringing together of families with elderly relatives “for hours, let alone days” as “a recipe for regret for many families”.

And as the UK recorded its highest number of total daily deaths since the start of May, the British Medical Association (BMA) also warned that the Christmas period will “almost certainly” lead to a rise in the infection rate.

Meanwhile, England’s chief medical officer Chris Whitty has said that “many of us hope that things will begin to normalise” by spring 2021, but cautioned that this will be a “steady” rather than immediate return to normality.

‘We’re at war with the virus, not one another’: Biden delivers Thanksgiving address as US reels from Covid

My colleague in the US, Alex Woodward, has this report on the president-elect’s Thanksgiving address.

“Service to country, service to each other, and gratitude in the face of suffering have long been part of what Thanksgiving means in America,” Joe Biden said from Delaware.

“We find ourselves again facing a long hard winter,” he said. “I know the country has grown weary of the fight … We’re at war with the virus, not with one another.” 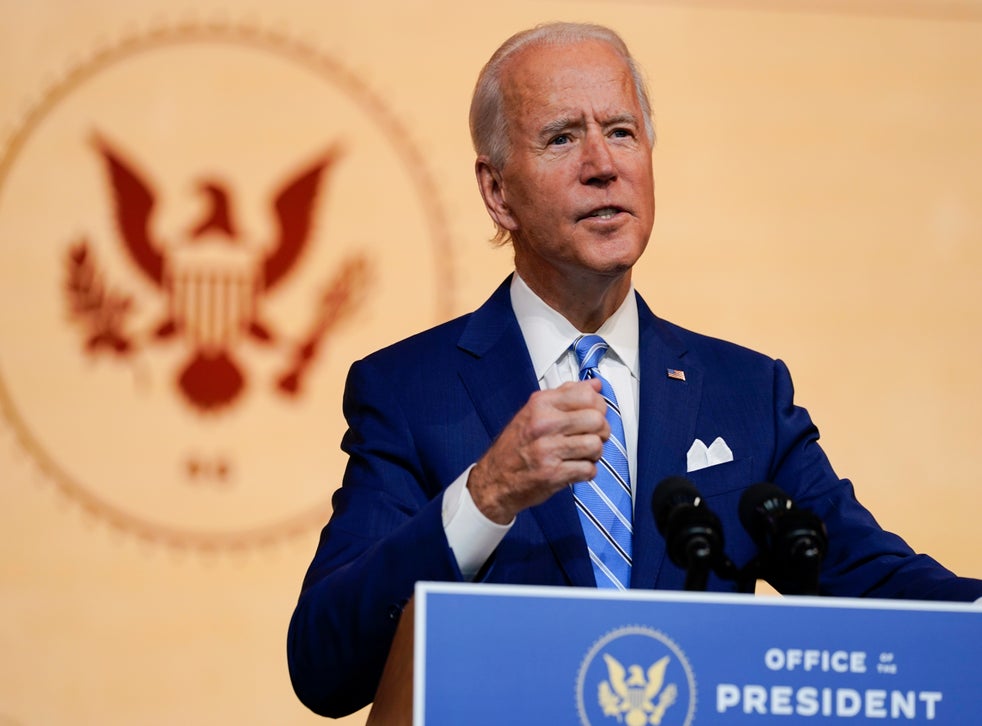 Germany’s so-called “wave-breaker” lockdown, announced on 2 November, will be extended until 20 December, Angela Merkel has said, in a bid to push national infection rates below 50 cases per 100,000 people.

“I remain convinced that we have to continue to pursue this goal,” the chancellor told reporters in Berlin.

One major new restriction stipulates that only up to five people from two households – not including young children – can meet, except over the Christmas period when the number will be increased to 10.

How does the government decide tier restrictions in each area?

With ministers preparing to announce tomorrow which areas will be placed in which tier, here are the five factors which the government says it takes into account.

The two other measures are the positivity rate – the number of positive cases detected as a percentage of tests taken – and pressure on the NHS, including current and projected occupancy.

But Downing Street has declined to give any further details on the indicators, nor any estimate of the thresholds.

The Nightingale Hospital in Exeter, which opened in July, will receive its first coronavirus patients on Thursday.

“The Nightingale Exeter will accept patients tomorrow who will be transferred from the Royal Devon and Exeter NHS Foundation Trust (RD&E) which is very busy,” a spokesperson said.

Discussing the pandemic as he promoted his new memoir, Barack Obama said: “This would have been hard for anyone.”

Some aspects of the pandemic response were not "rocket science", Mr Obama told Late Show host Stephen Colbert, as he lashed out at the defeated incumbent’s “shambolic” handling of the crisis.

“We're not talking about inventing vaccines, which are now coming on board,” he said, adding that Mr Trump could have done better by “communicating effectively” and “respecting the science".

After pounding the country’s biggest cities in the spring and summer months, the coronavirus has now caught-up with rural and small-town America, where officials say they are drowning, and fast, Gino Spocchia reports.

According to Reuters’ interviews with more than a dozen medical care providers and public health officials in the country’s heartland, many hospitals are severely lacking in beds, equipment and – most critically – clinical staff, including specialists and nurses.

And while Covid-19 cases and hospitalisations have spiked all over the United States, the Midwest – which stretches from Ohio to the Dakotas – has been particularly brutalised.

‘Everyone is continuing to go about their lives but we sort of feel like we’re drowning,’ said one doctor

Declare two public holidays next year for those who cannot celebrate this Christmas, Sage advisor suggests

Stephen Reicher, a member of Sage’s behavioural science subcommittee, has added his name to a growing number of people suggesting that the government declare two days of national holiday in 2021 to compensate for those who feel it is too risky for them to celebrate this Christmas with their loved ones.

Virologist suggests a ‘Zoom Christmas’ for those who can tolerate it

“There is a risk of a third wave in January 2021 if we relax too much at Christmas,” Dr Julian Tang, clinical virologist at the University of Leicester, told the Science Media Centre.

“Most people in the country are still susceptible to the virus and any mixing will just give the virus a chance to spread further. For some, this year's Christmas contact will be very important - perhaps more so than in other years.

“But if the rest of us who can tolerate a Zoom Christmas can do this to reduce the transmission risk for those who can't, this will also reduce the virus spread for that bit longer, which will help all of us - and hopefully prevent a New Year third wave and possibly another national lockdown.”

The publication of data on coronavirus infection rates across the UK has been brought forward to "respond to emerging policy decisions", according to the Office for National Statistics.

The weekly Covid-19 Infection Survey is now set to be published at 10.30am on Thursday – the same day the government will reveal which tier of the new system areas in England will enter into when the current lockdown ends.

‘I hope your last moments don’t look like this’: ICU doctor reveals what a dying Covid patient sees

A doctor has recorded a video of what it looks like when a patient dies from Covid-19, in order to convince people to protect themselves by wearing face masks.

My colleague James Crump has the full report here:

‘Your personal liberty won’t matter to you when I put a breathing tube in you, and then you die,’ says Dr Kenneth Remy

Ferdinand is the best transfer in the history of Manchester United according to O'Shea: Ronaldo is close, but Rio is number one
Rashford on penalties: Mourinho said: If you don't know how to earn them, then nothing will be awarded. This is something you need to learn
The FA will monitor compliance with the anti-covid protocol. Players are not allowed to hug after goals
Chelsea win away in the Premier League for the first time in 2 months
The insidiousness of snow football in Turkey. Players in white are just not visible ❄ I
Real Madrid have the worst start to the season under Zidane - 6 defeats and 5 draws in 25 games
Takumi Minamino: Proud of Liverpool's Premier League win, but doubted it helped him in half a season
Source https://www.independent.co.uk/news/health/covid-uk-update-live-news-tiers-lockdown-latest-b1761494.html

Inside cheapest property on Zoopla - two-bedroom house on market for £25,000

After everyone in Britain is vaccinated, let’s go and save Europe

OLD The Masked Singer: Who is Robin? Here’s what we know

The Masked Singer UK clues and theories for remaining contestants

OLD The Masked Singer: Full list of odds for who’s behind each costume

Son of Only Fools and Horses star died of brain haemorrhage

23 more people have died in Greater Manchester's hospitals with Covid

'It's not their party any more': Trump leaves Republicans deeply fractured

Lost tower that was once the tallest building in the country