First up, let’s have a look at the death toll. It has jumped 64 from this time yesterday, to a total of 425 inside China, according to the latest figures (one death has also been recorded in the Philippines). This Chinese figure is an increase of just under 18% in 24 hours.

While these figures are significant, it’s worth noting that the rate of increase in both deaths and infections is lower on a day-by-day basis than it was on some occasions last week (where the death-toll increase was 29% on one day).

It’s obviously hard to tell if this represents a trend of any kind, given the relatively few days of data to look at, but I thought it was interesting, none-the less.

This image from the Johns Hopkins below shows the trend visually. If you want to check in with the tracker later, you can find it here. 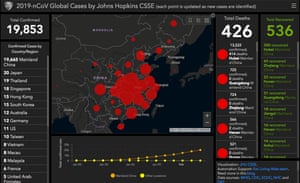