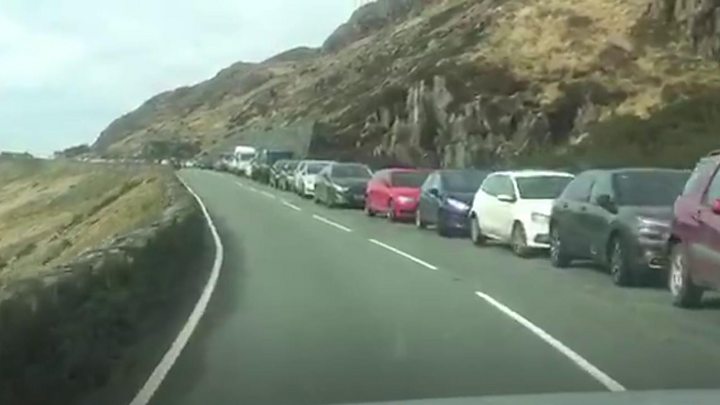 Media captionSaturday was the "busiest ever visitor day in living memory" in Snowdonia, officials say

Car parks and trails could be shut to stop people from visiting Snowdonia National Park after "unprecedented scenes", according to bosses.

There were so many people on mountain summits on Saturday it was "impossible to maintain effective social distancing".

Pen y Fan in the Brecon Beacons and some Welsh beaches were also busy.

Welsh ministers are considering their legal powers to force people to stay away during the coronavirus outbreak.

Deputy Economy and Transport Minister Lee Waters said some people were "pretending everything is normal" at a time when hospitals were "turning canteens into spillover intensive care units".

It comes as seven more people in Wales died after contracting the virus, taking the total number of deaths to 12.

There have already been calls from local politicians and medics to encourage second home owners and caravan owners to stay away from Wales' holiday hotspots, where some people have travelled to self-isolate.

They also urged them to adhere to guidance on social distancing to prevent the spread of Covid-19.

There have been similar appeals in Cornwall and the Scottish Highlands.

And signs have been put in Bala by people angered by the numbers of people passing through the Gwynedd town.

"More worrying still is the significant crowding on the mountain summits and trails making it impossible to maintain effective social distancing."

The authority is calling on the prime minister and first minister to provide "stronger measures on unnecessary travel and social distancing, to ensure that we do not see a repeat of yesterday's scenes across Snowdonia".

The park said: "If no further steps are taken we will need to take drastic measures to protect the communities and health services in north Wales, such as shutting down car parks and trails."

Boris Johnson has warned the NHS could be "overwhelmed" if people do not act to slow the "accelerating" spread of coronavirus, as he urged the UK not to visit loved ones on Mother's Day. 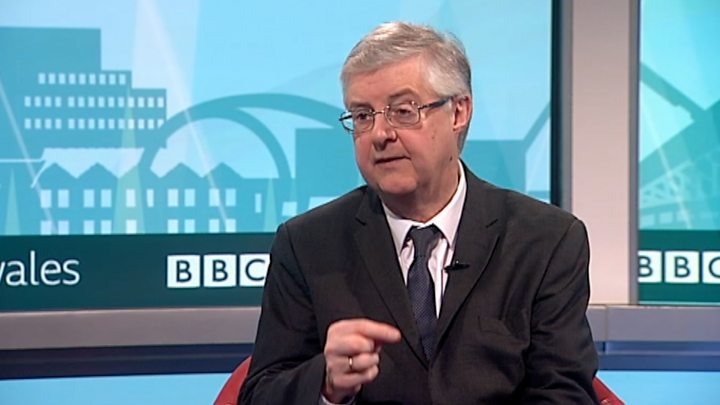 And Wales' Health Minister Vaughan Gething tweeted to say that he and First Minister Mark Drakeford were "actively considering our legal powers to directly intervene" due to concerns about the influx of visitors to Wales.

Mr Drakeford told BBC Politics Wales the "pace of the disease continues to quicken" in Wales.

"We need to take actions that will save lives," he said.

He also said people should only travel if they "absolutely have to and keep your distance from others".

How are mountain rescuers coping?

Mountain rescuers also made a desperate plea for walkers with Covid-19, or who are self-isolating, not to venture on to the hills and put them at risk.

They described it as an almost "bank holiday" atmosphere on the mountains and hills of north Wales on Saturday. From Moel Famau in the east and in Snowdonia, people were out in force.

Llanberis Mountain Rescue Team said it remained operational but the outbreak could have an impact on it being able to "call a team together" at times, with some of its volunteers in frontline day jobs.

Chairman Alun Allcock spoke out after the team was called to rescue an injured climber after a group of four had travelled to the area from Surrey on Saturday.

Central Beacons Mountain Rescue Team said it was hampered when a path was blocked by cars near Ystradfellte waterfalls on Saturday.

EASY STEPS: How to keep safe

What about the coast?

People seeking fresh air on the Welsh coast while coronavirus social-distancing measures apply have been warned against taking "unnecessary risks".

Porthcawl councillor Sean Aspey estimated there were about 6,000 people visiting the town on Saturday.

There were queues outside chip shops, people drinking and not social distancing, Mr Aspey said.

He urged people to "be considerate."

"We have a high proportion of elderly people in this town and they are frightened to death," he said.

"To see that going on yesterday was quite shocking.

"We could have an explosion of cases through no fault of our own."

Barry Island was also busy on both Saturday and Sunday - with crowds of people on the promenade.

Welsh Government minister Lee Waters told people: "If you don't need to go out, then don't go out at all."

"If we're not careful, the government will have to bring in movement restrictions and you can't say you weren't warned," he said.

"We've got to listen to advice and stop pretending everything is normal".

There is a real chance that 50-60 clubs will go bankrupt. The owner of Huddersfield about the consequences of the pandemic
Valverde about the game with Manchester City: we Want to play so that we can go further. Real is ready to do anything for this
Great selection from Roma: KAFU opens up in the box and waits for a pass, but instead Totti and Batistuta score masterpieces
Sabitzer has been exposed to coronavirus in April
In the 90s, the Russian club played in the Finnish championship: the players carried cigarettes, the President went on the field. It ended because of the default
Flick about Holand: it is the first season, so it is too early to compare it with Levandovsky
Felix sprained a knee ligament in training. This is his 3rd injury of the season at Atletico
Source https://www.bbc.com/news/uk-wales-51994504