Evergreen Plaza was a place that I would take the bus to go and shop, eat and see movies. It was one of the coolest places on the south side of Chicago because you could get cool clothes and get caramel and cheese popcorn, which is the Chicago thing. Evergreen Plaza wasn’t in my neighbourhood, so we had to go a little further out and we’d spend the whole day there. That’s where you would go to try to talk to girls. We would come up with lines to say to a girl – we called it macking. “Hey girl, you look good,” or “Man, them pants look nice.” Back then you ain’t got no game, you don’t know what to say, but I was still kind of a lover boy. I would write love letters to my girlfriend, or girls who I wanted to be my girlfriend.

When I was 13, I watched this TV special, Motown 25, a celebration with all these Motown artists on the label’s 25th anniversary. Michael Jackson was, if not my favourite, then one of my favourite artists at the time. And in the special, he busted out a dance: the moonwalk. It stuck with the whole world, of course, but it really stuck with me. I can see it now. I remember where I was; a friend videotaped it and I rewound it and watched it so many times. It was one of those moments where it was out of body in a way, because his energy was so incredible. The moonwalk impacted our culture so much. I can moonwalk; I worked on it immediately after seeing it. It became part of the breakdance culture at some point, too, and I can break a little bit.

Man, I love this movie and quote it all the time. I watched Eddie Murphy’s standup specials and saw him on Saturday Night Live and [the film] 48 Hours. But Trading Places was just such a fun story. I loved what it was saying: that this dude had talent and gifts, he just didn’t have the opportunity. I didn’t crystallise all that as a teenager, but I did feel it was saying something and it felt kind of empowering in its own way. This Black man who was homeless was given the same opportunity as the white, and he was able to thrive; it was saying something that seemed really hopeful to me. He didn’t have the education of the other person, but he still had the knack. It was funny and well told, but when I look back at what it was saying, it had that effect on me without me even realising.

Metro Music was on 87th Street in Chicago, which is where I grew up around. I bought my first ever record from there. My father came with me and said he would buy me a record – I believe I told him I wanted Afrika Bambaataa and the Soulsonic Force – Planet Rock, which was one of the first hip-hop records. I would go to Metro Music every Tuesday to go see what records had come out. I bought Biz Markie’s album there, Big Daddy Kane, New Edition, KRS-One back when he was part of Boogie Down Productions. I bought Stevie Wonder’s Hotter Than July from there, and that was one of the first albums I used to always play. It was a really influential place in my life, it’s where I absorbed music. Two older cats worked there, and they knew you so they would always tell you what was going on, and laugh and joke with you. They were mainly into older music so they would sometimes laugh at what we were into, cos we would come into there with such excitement, but they probably didn’t have that same enthusiasm for hip-hop. It smelled good in there, they kept some great incense burning, and there was always good music playing. It was a cool spot; I was sad when they closed down. 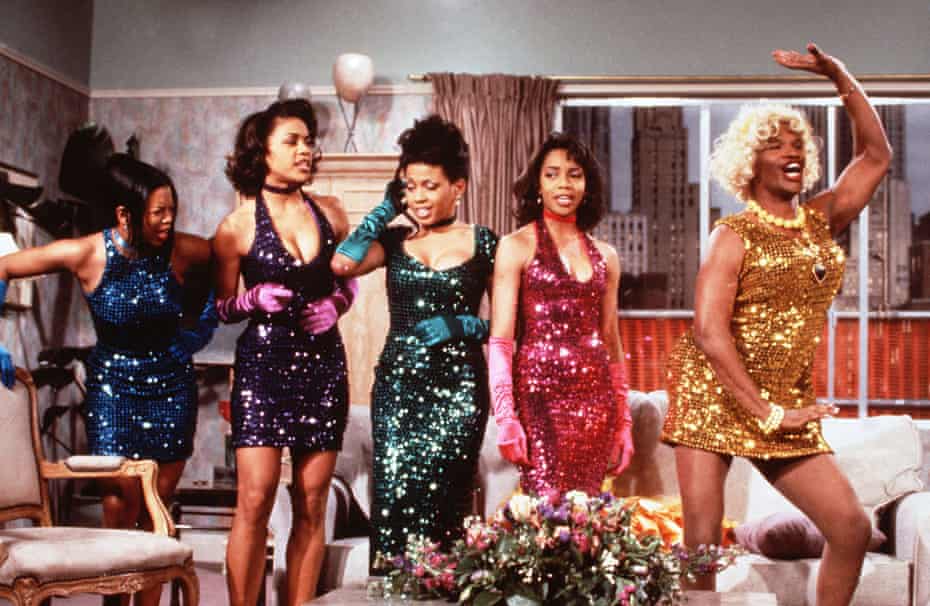 I loved TV shows like Diff’rent Strokes; you’d go to school the next day and discuss what happened on Diff’rent Strokes that week. And I watched Dynasty with my mother; we would try guess what was going to happen. I loved the soap opera of it, and that the characters were all rich, doing crazy shit. I can remember going and laying in my mom’s bed or sitting on the chair next to her bed and watching Dynasty with her. But a show that really had an impact on my teenage years was [sketch comedy series] In Living Color. It was so funny and unique, and they had so much talent: Keenan Ivory Wayans, Damon Wayans, Jim Carrey, Jamie Foxx; Jennifer Lopez was a dancer on it. And they had amazing artists come on to perform, hip-hop mostly. I wanted to be on In Living Color; by then I was rapping, and every great rapper would be on that show. So many of my raps reference characters from the show, or their sayings; for example, the character Fire Marshall Bill would say: “Let’s just say for instance” and I’ve said that in a couple of my rhymes. You could reference anything from In Living Color and people knew, because it transcended colour and age group. As a teenager, I had to watch that.

I was a ballboy for the Chicago Bulls. After a few games, players would give their sneakers away, and as a ballboy you could be lucky enough to get them. Obviously I couldn’t fit in them at that age, but I was able to sell them. But when Air Jordans came, Michael Jordan gave me a pair of Air Jordans off his feet that he signed. That blew my mind. I gave those gym shoes – we call them gym shoes in Chicago – to my dad, because he could fit them. He ended up wearing them around a lot, and I was like: “No, why are you doing that!? These are signed, and off Michael’s feet!” Whole Air Jordan outfits were everything, too. If I got good grades, my mother would agree to get me Air Jordan items. I cherished it. I’ve got pictures of me in Air Jordan warm-up suits shooting basketball on a Nerf hoop outside my house, trying to be like Michael. My father has passed now, but he gave the shoes to one of my sisters.

Years later, Michael came to one of my performances in Chicago at the House of Blues. I couldn’t believe he was there, but once I told the audience he was there, I might as well have not been on stage, everyone was looking at Mike. One time we saw him at a club, and my friend told him: “Common used to be a ballboy! He used to pick up your dirty, sweaty clothes!” Mike was real nice about it. But one time he saw me playing basketball at a celebrity game, and he told me I should stick to rapping.

Italy is investigating 62 transfers due to possible overpricing of players. 42 Transfers concern Juve
Rafael Nadal: I support Benzema in the fight for the Golden Ball. I admire him and his professionalism
Rio Ferdinand: Manchester United have problems with self-determination. Our team lost to City 1-6, but we had an identity
Cruyff, Maradona, the ghosts of Italy and the Bundesliga bar - on the streets of Barcelona. How cool it is to stumble upon football in everyday life
A prostitute robbed a PSG player in his car, stopped at a traffic light
President of Bavaria on Kimmich: We support vaccination, but it is optional. This is everyone's choice
Ex-referee Gallagher on the yellow Ronaldo kicking the ball at Jones' groin: The right decision. Cristiano was saved from removal by the fact that the ball was there

JinnKid arrested – Inside deadly side of TikTok where stars ‘murder, die smuggling illegal immigrants, & get shot’

Tyneside faces from 2002 - recognise any of the people in our 25 photographs?

'Angry' Prince Harry was ‘struggling to find himself’ before he met Meghan, expert says

Disney has MASSIVE discounts on large soft toys with £25 off

Isis in Afghanistan could have the capability of attacking US in six months, intel finds

How long does the budget speech last and what time is it announced?

The kebab house named best in Wales for the second time

Sunak prepares to deliver Budget for a ‘new economy’

Man, 70, dies after reports of fight at Yacht Club

What time is the UK Budget statement today? Rishi Sunak to deliver spending plans to MPs this afternoon

WhatsApp: The truth about claims app will stop working on iPhones and Android

The biggest problems with the £37bn NHS Test and Trace system

Four charged in connection with 'disturbance' on Fife street

Belgium warns Poland "not to play with fire" over EU dispute

Civil rights pioneer, 82, tries to get her 1955 record for refusing to give up her seat on a bus expunged

COP26: Here's what delegates will be eating as pioneering low carbon menu of Scottish food revealed

I’m a mum-of-23 including seven ‘angel babies’ – I’ll never forget the ones I lost, my kids talk about them all the time