The Tour de France peloton woke up with a hangover on Monday, not only from over-indulgence in the brasseries around the Champs Élysées, but also because of the headache caused by a growing anxiety looming over this year’s race.

The French media reported that public health officers had searched team hotel rooms in Méribel occupied by Nairo Quintana – a former Giro d’Italia and Vuelta a España winner – and his Arkea Samsic team, after stage 17. The team manager, Emmanuel Hubert, confirmed the search, but would not comment. Quintana finished 17th overall in the 2020 Tour.

A preliminary inquiry over suspicions of doping was subsequently opened by the public health department in Marseille. The prosecutor Dominique Laurens cited the “discovery of many health products including drugs and especially a method that can be qualified as doping”.

Nor was everyone in France in the mood to send Tadej Pogacar birthday greetings on Monday, as the new Tour de France champion celebrated turning 22, the morning after becoming the first Slovenian to head home from Paris with a yellow jersey.

Pogacar’s victory, founded on a storming time trial performance at La Planche des Belles Filles, that topped off his strong riding in the Pyrenees and Alps, had both elements of shock and awe. The awe was based on how much time he was able to take back from a woeful Primoz Roglic and his Jumbo-Visma teammate, the former world time trial champion Tom Dumoulin, the shock on the worrying histories of some members of his management team.

Some, to borrow the phrase used by one sceptic, are, for now, keeping their hands by their sides. The main reason for that is the continuing presence of those with their own dark histories working within the engine rooms of leading teams, including Pogacar’s UAE Team Emirates.

The UAE Team Emirates operation is run by Mauro Gianetti, team principal and CEO. The Swiss former professional, who spent three days in a coma in 1998 after being taken to hospital during the Tour de Romandie, has been at the heart of a series of notorious incidents over the past 25 years.

The most infamous would be the Saunier Duval scandal of 2008, when the Gianetti-managed team quit the Tour after their star rider Riccardo Riccò tested positive for a new generation EPO. Riccò was also fired, along with his teammate Leonardo Piepoli, and the sponsorship ended soon afterwards. 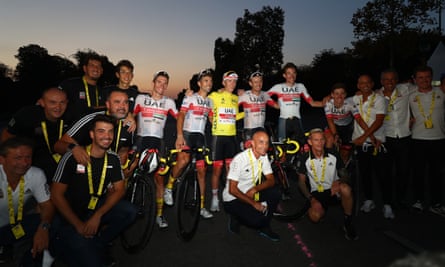 But neither the UCI nor ASO, the promoter of the Tour, could say they hadn’t been warned, given that the British professional David Millar, making his own comeback from a two-year doping ban, had written to both organisations expressing misgivings about Gianetti’s management, while riding for the team.

Gianetti and the Saunier Duval team manager, Matxin Fernández, later moved on to the Geox-TMC team, which included a rider called Juan José Cobo. The Spaniard had also raced for Gianetti at Saunier Duval. In 2011, to general surprise, Cobo burst through the ranks to win the Vuelta a España at the expense of Chris Froome.

It took nearly a decade for Cobo to be finally stripped of that victory, to the benefit of Froome. The four-times Tour de France winner was recovering in July 2019 from his serious crash when he heard the news that Cobo had been found guilty of “a violation of the anti-doping rules [use of a banned substance] based on irregularities found in his Athlete Biological Passport in 2009 and 2011”.

On Monday, the scepticism towards Pogacar’s success was noted, but not dwelt on, in the pages of L’Équipe, the French sports newspaper owned by ASO. Gianetti’s management career, it said, had “often been tainted by doping scandals”, while Fernández was described as “dragging several ‘casseroles’ of doping cases”.

Pogacar responded to questions by saying: “I am too young to remember that era.” He told L’Équipe: “I was 10 in 2008 and it’s strange to be talking about it because it goes against everything I believe in. I know that doping puts the health of athletes in danger, I’ve always been aware of that. We have nothing to hide today and I think that cycling, despite the climate of suspicion, has done a lot to fight doping. In truth it saddens me that people doubt my performances. My only defence is that I am happy with my conscience.”

The Tour director, Christian Prudhomme, shrugged off the scepticism. “We have carried our cross for many years,” he told Le Figaro. “In a way, it’s part of the game that some voices rise up, asking questions. I won’t be offended.”

Yet there were also signs during this Tour that the omertà, the law of silence that reached its peak during the Lance Armstrong years, may be creeping back. Direct questions on credibility and trust are now criticised by riders for “lacking respect” and even discouraged by others.

The move towards even greater restrictions on media access, essential to preserve sanitary “bubbles” during this Tour’s unique circumstances, has been welcomed by many teams and may remain, pandemic or not. Having somehow pulled off the Tour de Covid, the mentality within cycling’s bubble seems to mostly be cheer, clap and don’t ask questions.

Cuadrado on Juve: We have started the season slowly, but we have never lost
Is van de Beek better than Pogba? Bruno Fernandes? Also no. Evra on his words about the Manchester United rookie
Jose Mourinho: In my Real life, there were amazing attacking players, we built a team. Tottenham need balance
Umtiti became a vegan: Never felt so good. Lost three kilograms
Alisson on recovery from injury: I prayed a lot, spent 5-6 hours a day with physiotherapists
The VAR referee told the Barcelona - real match referee that Langle did not foul on Ramos. Catalans want to get audio
Frankie de Jong: we have to adapt to Messi. He is the best player in the world
Source https://www.theguardian.com/sport/2020/sep/22/climate-of-suspicion-returns-to-tour-de-france-to-dampen-celebrations

Disabled teen stabbed in stomach on night out with friends

Support from across East Lancashire for Marcus Rashford campaign

Water discovered on the 'sunlit surface' of the Moon

Andy Last explains why Hull FC are playing so confidently

Children in West Dunbartonshire told not to go guising this Halloween

Tim Hortons getting set to open new drive-thru in Motherwell

Tier 3 lockdown confirmed for Warrington - and Nottinghamshire set to follow

Criminal gang could be behind spate of robberies on Merseyside

North East's vow to 'resist any attempt' to impose Tier 3

Timeless scenes at South Shields pier - how does this location look today?

No 'young and healthy' adults have died from Covid in last month, new data shows

The nine-year record Newcastle have matched after Wolves draw

All sixth form pupils at one school required to self-isolate

Cyclist hospitalised after collision with car in Blackburn town centre

Lack of hormones during pregnancy raises ADHD risk by a quarter, says research

How the DWP can monitor your bank account this Christmas