HS2 Rebellion protesters are in a ‘stand off’ with police after climbing to the top of the controversial rail line’s headquarters and painting it pink.

Footage shows the pair spraying the building in neon pink paint to show their support of the Burning Pink Party, which is calling for citizens’ assemblies to tackle the climate crisis and other political issues.

Police brought in scaffolding to climb on the canopy in an attempt to coax the protesters down, but the pair are refusing to leave.

Dr Larch, who recently spent 27 days in a hand built tunnel under Euston Square Gardens, said he is prepared to stake out all night and risk going to prison because of his vandalism as long as he raises awareness for the cause.

He and Xavier have three demands, including that whoever wins the London Mayoral election tomorrow commits to running a citizens’ assembly on the capital’s infrastructure. 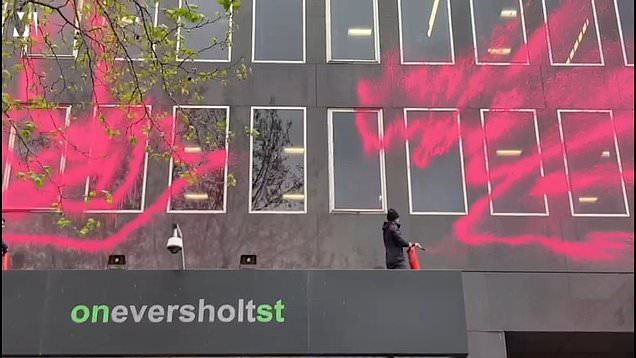 A citizens’ assembly – sometimes known as a people’s jury – is a body formed from citizens to deliberate on issues of local, national or international importance.

Dr Larch told Metro.co.uk: ‘We need ordinary people to be making the decisions about our future, our future is at stake. Risks have been taken with our future by governments and by corporations. So we cannot trust them anymore, we have to have people power now for the citizens assemblies.

‘We are risking being sent to prison for this action. We’re taking that risk and making that sacrifice because the science says we’re heading towards societal collapse.

‘The last time there was this much carbon dioxide in the atmosphere London was 25 meters underwater.

‘The science is very clear on that, but the media hasn’t been covering it enough. The politicians haven’t been telling the truth about it. We certainly haven’t taken appropriate action.’

Dr Larch also criticised the media for ‘ignoring’ the mayoral campaign of Valerie Brown, The Burning Pink Party candidate for Mayor of London who opposes HS2.

He attacked Sadiq Khan, the current Mayor of London, for supporting the scheme on the day voters went to the polls to decide if he deserves another term.

Protesters also claim the line will destroy or irreparably damage 108 ancient woodlands and 693 wildlife sites, and that Euston Square Gardens will be built over with a temporary taxi rank before being sold off to developers.

HS2 want politicians to establish a citizens’ assembly on the project, as well as wider UK infrastructure.

Dr Larch said he knew his demands would not be met overnight but that he hoped his protest would get more people talking about citizens’ assemblies.

‘Once we get the media talking about citizens’ assemblies and the importance of that in the future, we will come down voluntarily,’ he said.

A spokesperson for HS2 said windows have been smashed as well as graffiti sprayed in the protest at the office in Euston, which is shared with Network Rail.

A statement said: ‘We utterly condemn this senseless criminal damage.

‘HS2 has been repeatedly and excessively targeted by this sort of criminal activity during the pandemic, threatening the safety of the public and our workers, and placing unnecessary strain on the emergency services.