THE out-of-control Chinese rocket is just HOURS from hitting Earth as scientists desperately track path of the 21-ton space junk.

It is feared that it could hit cities including New York City, Rome or even Madrid as it's set to crash back to Earth today, warn experts.

🚀Follow our Chinese rocket live blog for all the latest updates...

A tracking website shows that the rocket part will impact in just over six hours' time.

The question remains, however, where exactly it will hit.

The rocket’s orbit is covering “an area between 42 degrees north and south; that’s as far north as Boston and as far south as Hobart, Australia”, writes ABC News.

“A great big chunk of the world’s population is under it,” Ted Muelhaupt of the Aerospace Corporation told the broadcaster.

ABC says that the rocket is orbiting around Earth about 15 times a day, covering a slightly different patch of the planet each orbit.

“As time goes on, it moves closer and closer to Earth,” the site adds.

“Under international guidelines, rockets are supposed to return to Earth in a controlled way, but the 30-metre-long rocket is spiralling out of control,” reports ABC News in Australia.

The national broadcaster adds that, “weighing around 22.5 tonnes, it’s one of the most massive pieces of space junk to make an uncontrolled re-entry to Earth”.

“This is probably among the top 10 largest objects to come down in one piece,” said space junk expert Ted Muelhaupt of the Aerospace Corporation, a not-for-profit organisation that advises US government space and defence agencies.

Scientists trying to track the final movements of the 21-ton space junk - as big as three fire engines - say it could also plummet to Chicago or Beijing.

The rocket stage’s orbital inclination of 41.5 degrees means that reentry could potentially be as far north as Chicago, New York City, Rome and Beijing, explains Aerospace in the US.

Or, it could end up as far south as New Zealand and Chile.

That places any of those locations within the potential reentry path of this giant piece of space junk measuring 98 feet long and 16.5 feet wide, the experts add.

Websites such as orbit.ing-now are using radar data to show you in real time where the rocket is currently over Earth.

According to this site, it is whizzing round the globe at 28,053km/h.

The huge Chinese rocket making an out-of-control tumble from space looks set to crash back to Earth this weekend, as experts warn that debris from the impact could hit an inhabited area.

Calculations of the 21-ton booster's trajectory predict that it will fall on Saturday, US time, though where it will land "cannot be pinpointed until within hours of its re-entry", the Pentagon said.

But there are no plan to shoot down the out-of-control Chinese rocket, said the Pentagon chief.

US Defense Secretary Lloyd Austin said that remnants of the large rocket, expected to plunge back through the atmosphere, would not be deliberately brought down.

However, the US Space Command is tracking debris from the spacecraft, which lifted off last week carrying the first module of China's new space station.

At roughly 30 metres (100ft) long, the booster stage would be among the biggest pieces of space debris ever to fall back to Earth.

Experts have warned that debris from the crash could land anywhere in a "red zone" that contains major cities including New York and Madrid.

However, the ejected space junk will most likely hit the Pacific Ocean near the equator after passing over eastern US cities, Space Command said.

US Secretary of Defense Lloyd Austin is "aware and he knows the space command is tracking, literally tracking this rocket debris," Pentagon spokesman John Kirby said.

China on April 29 launched the first of three elements for its station atop the Long March 5B rocket, that is now being tracked.

The body of the rocket "is almost intact coming down," Kirby said, adding that its re-entry is expected on Saturday.

After its separation from the space station module, the rocket began to orbit the Earth in an irregular trajectory as it slowly lost altitude.

That makes any predictions about where it will re-enter the atmosphere or fall back to the ground nearly impossible.

It could end up breaking apart upon entry, with only smaller debris bits falling to Earth.

The Aerospace Corporation got more advice on the space junk from Marlon Sorge of the firm's Center for Orbital and Reentry Debris Studies (CORDS).

"The empty rocket body is in an elliptical orbit around Earth where it is being dragged toward an uncontrolled reentry," Aerospace explained.

Asked how much debris would hit earth, and potentially hit someone, Sorge, principal engineer, replied: "The probability that any random reentry will land in the ocean is about 3:4, since the Earth is about 75 per cent covered by oceans.

"The probability that a piece of space debris will land on a city or a densely populated area is usually relatively small.

"What makes this reentry particularly noteworthy is that it will occur between 41.5 deg N and 41.5 deg S latitudes, where the vast bulk of the world’s population lives.

"However, the statistical risk to any one person of being struck by falling space debris is so low that a colleague of mine jokes that if reentry predictions put his house directly under the path, he’d go out with a camera and watch."

Even if the rocket falls from the sky mostly intact, there is a good chance it will splash down into the ocean, which covers 70 per cent of Earth's surface.

But neither of those outcomes is certain, and there is a chance the rocket could crash land into an inhabited area or onto a ship.

Kirby said it is "too soon" to know whether any action, such as destroying the space debris, can be taken if human-occupied regions are threatened.

"We're tracking it. We're following it as closely as we can," he said.

"It's just a little too soon right now to know where it's going to go or what, if anything, can be done about that."

The rocket is travelling at four miles a second and could fall anywhere between 41 degrees north and south of the equator, an area that also takes in Beijing, Sydney, Delhi and Rio de Janeiro.

Debris from the Falcon 9 rocket came crashing down near Seattle last month, dropping debris on Washington State in the process.

McDowell said he hopes that China is developing the ability for the Long March 5b to make a controlled re-entry.

“Since 1990 nothing over 10 tons has been deliberately left in orbit to re-enter uncontrolled.”

Holger Krag, head of the Space Safety Program Office for the European Space Agency, said: "China is aware of the potential uncontrolled descent.

“It is always difficult to assess the amount of surviving mass and number of fragments without knowing the design of the object, but a reasonable rule-of-thumb is about 20-40 per cent of the original dry mass."

In May 2020, another Long March 5B rocket slammed through the atmosphere, partially burning up on its descent.

The core fell largely into the Atlantic Ocean, but some debris landed in West Africa. 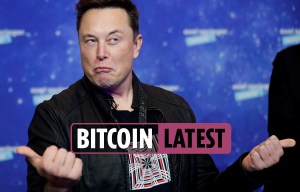 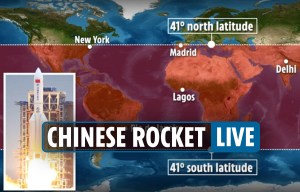 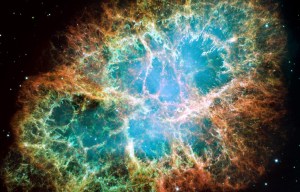 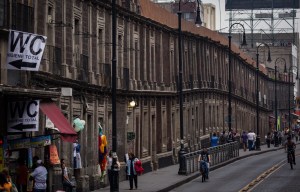 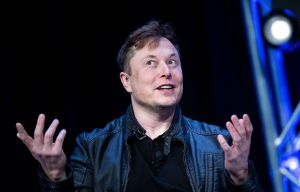 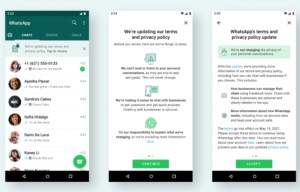 According to the South China Morning Post, some chunks of debris crashed into inhabited villages in the Ivory Coast, though no injuries were reported.

The module that the rocket was delivering, named Tian He, will become become living quarters for three crew members.

China aims to complete its Chinese Space Station, known as Tiangong by the end of 2022, state media reported, after several further modules are launched.

Pregnant Lauren Goodger meditating ahead of labour but missed her hypnobirthing

Restrictions ‘could end on July 5’ if Covid vaccine success continues