Nine years ago, Sergio Aguero had conjured his never-to-be-forgotten moment to clinch Manchester City’s first Premier League title and now, the iconic striker had the chance to secure his club’s fifth – and their seventh top division championship overall.

With City leading through Raheem Sterling’s goal, Agüero stood over a penalty in first-half stoppage-time. Score it and City would surely have the victory they needed to claim the title in their grasp.

Agüero, who will leave the club at the end of the season, fancied wrapping it up in style. He went for the panenka only the disguise was not there. Édouard Mendy, the Chelsea goalkeeper, threw out a hand and patted it away. Oh dear.

Chelsea needed something for their push for a top four finish. They needed something too, perhaps, to set down a psychological marker ahead of their meeting with City in the Champions League final on 29 May. And they got it on the back of a magnificent second-half performance.

Hakim Ziyech rattled home a low shot to equalise and, at the very death, Timo Werner cut back a cross and there was Marcos Alonso to scuff a shot past Emerson.

City were dazed. Moments earlier, they thought that they had a second penalty when the Chelsea substitute, Kurt Zouma, lost Sterling and clipped him inside the area. To their amazement, there was no award. The title, of course, remains firmly in their grasp. For now, they must wait

The City team bus had been welcomed into the stadium at a little after 4pm by a crowd of a few hundred fans, who let off blue smoke canisters and bellowed their conviction that the title would be theirs by the close of play.

There was so much at stake for both clubs and it was impossible to ignore the Champions League sub-plot, no matter how much the managers had tried to play down the link between this game and the final at the end of the month. Yet the most urgent storyline was City’s quest for another league championship, to offer the latest confirmation of their dominance of English football over the last ten years.

What could be said with certainty is that the starting lineups will be different when the European tie kicks off, radically so in City’s case. Guardiola made nine changes from the team he sent out in last Tuesday’s semi-final, second-leg win over Paris Saint-Germain and there was a new-look 3-3-2-2 system. John Stones was suspended and there was no place in the squad for Kevin De Bruyne.

Guardiola’s idea was for Ferran Torres andSterling to tuck inside and allow room for the wing-backs, João Cancelo and Benjamin Mendy, to push high and wide. Gabriel Jesus dropped off the front-line, especially when Chelsea had the ball, while Rodri was tasked with holding everything together in the middle.

It was tight and cagey for much of the first half, which is how Chelsea can often make it. They tried to leave no spaces between the lines and the only real chances came when Nathan Aké headed over from a corner for City and Ziyech extended Ederson at the other end. 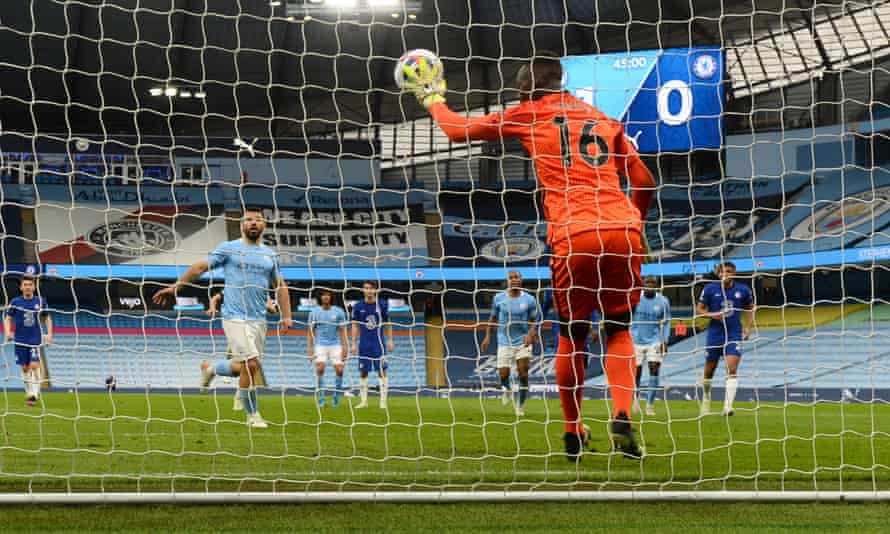 But the game was blown open at the end of the period when Andreas Christensen came across to deal with a ball up the inside right channel, pursued by Jesus, and failed to make the clearance, toppling over and hurting himself in the process.

It was the second time that Christensen had misjudged a pass in that position and, on this occasion, he paid. Jesus crossed and, although Agüero took an awful touch inside the area, with the goal gaping, Sterling was on hand to sweep home.

What happened next was heavy on farce. With Chelsea down to ten men – Thomas Tuchel could not getZouma on for Christensen in time – Torres crossed low and Jesus, who had got himself on the wrong side of Billy Gilmour, tangled with him and went down. The penalty award looked soft. Enter Agüero and an audacious Panenka attempt, clipping up the middle. Except that Éduardo Mendy read it to catch the ball with one hand. Guardiola turned on his heel in a fury. The City substitutes were open-mouthed in disbelief.

Tuchel was a ball of pent-up tension on the touchline, his ire having been stoked on 12 minutes when Sterling jumped into a terrible tackle on Timo Werner, having lost the ball. He crashed into the Chelsea striker’s lower leg and was fortunate to get away with a booking.

Tuchel’s line-up was closer to full-strength than Guardiola’s, although it still showed five changes to the one that had begun the Champions League semi-final, second-leg win against Real Madrid last Wednesday. Furthermore, Ben Chilwell, Thiago Silva and Mason Mount did not travel.

Chelsea wanted to make inroads up the channels, particularly the left, with Werner, who played as the central striker, bending some of his runs there. He played on the shoulder of the last defender, sometimes too much, tiptoeing into offside positions. The menace was there.

It came from Ziyech, too, and he sparked the move for his equaliser when he robbed Rodri, working the ball to César Azpilicueta. From there, Chelsea sensed blood. Azpilicueta fed Ziyech and from there it was returned to him on the edge of the area via Christian Pulisic and Azpilicueta. Ziyech’s low shot flashed past Ederson.

Chelsea were the better team in the second-half. Reece James surged up the right, causing problems for Benjamin Mendy and, from one of his crosses, the substitute, Callum Hudson-Odoi, would have the ball in the net only to be called back for a hair-line offside decision.

Kiwi wars: the golden fruit fuelling a feud between New Zealand and China