Rangers keeper Allan McGregor has once again reinforced this morning that he has his team-mates won't be looking too far ahead this season.

The veteran insists the focus is solely on Malmo but you can't expect supporters not to look ahead as they get set to find out who is next.

The Swedes are no dummies and will offer Steven Gerrard and his players a test over the next week as they look to secure a winner takes all clash and a seat at European football's top table.

A mammoth cash prize lies in wait but Rangers are also hell-bent on securing a place in the group stage as it would end an 11-year absence from this competition and build on stirring recent runs in the Europa League.

But some fearsome foes lie in wait and there's even the potential to be reunited with old rivals Slavia Prague - less than six months from the horrific racist abuse Glen Kamara was subjected to.

The draw is set to get underway in Nyon at 11am but we will bring you all the build-up and drama ahead of the big reveal.

A reminder of who Rangers could face 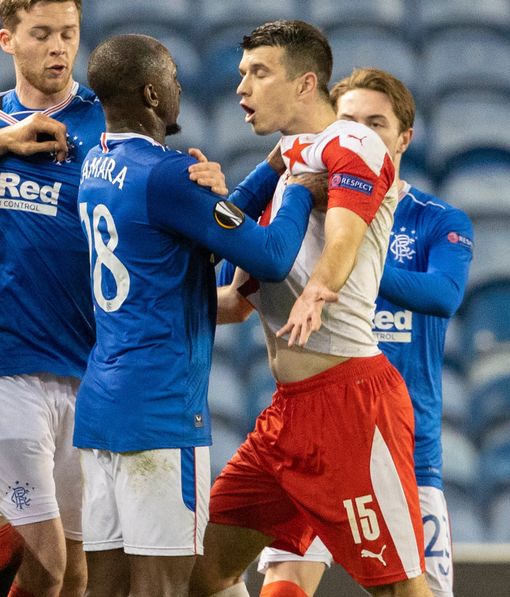 There will undoubtedly be a lot of Rangers fans keen to land Slavia Prague in what would be a bit of a grudge match following the ugly nature of that last meeting.

But in purely footballing terms it would be a real challenge facing the Czech side again as they were clearly a quality side even if their conduct was shameful.

Steven Gerrard acknowledged that his Light Blues were beaten by the better side as they lost 2-0 following the 1-1 draw in Prague.

Everything else aside, that would be a concern although they would at least have the benefit of knowing the need to improve.

And the focus is very much on Malmo

I have watched a lot of Malmo in the last ten days and have been impressed with the fitness levels and work ethic, they can play with a four but also change to a back five so we have to be prepared for this. They can be very aggressive and press high at home.

Rangers would love a chance at revenge but the Czech side remain a live threat and have started the season in fine fettle.

Who Rangers could face?

Some tricky ties, of course, but the champions playoff route knocks away danger sides from bigger leagues such as Shakhtar Donetsk, Benfica and PSV.

But still some tasty ties there

Rangers might be in Malmo prep mode but their supporters are looking at who is coming out the hat for the playoff round.

The Ibrox faithful are allowed to dream after 11 years away from the biggest competition in club football.