CAROLINE Flack, a woman who always wore her heart firmly on her sleeve, often found that her career highs ­coincided with crushing personal lows.

The ambitious star, who worked her way up to presenting The X Factor was open about her struggles — and unapologetic about living them out in the public eye.

Only a day after winning Strictly Come Dancing, “the biggest show on telly” she said, she sank into a year-long depression.

Just last March, the bubbly yet fragile host wondered if she’d been put on Earth to show other women that life is full of ups and down.

She grew up in Norfolk with parents Ian and Christine, her twin sister Jody, from who she was “inseparable”, sister Liz and brother Paul.

At 16 Caroline, who idolised Kylie Minogue, went to stage school in Cambridge on her own — and three years later headed to London seeking stardom, landing a part in 2001 film Is Harry On The Boat? in which she snogged Danny Dyer.

She decided she wanted to be a TV host and took on factory work to earn a crust before finding jobs fronting shows including CBBC’s TMi and a revived version of Nineties hit Gladiators with Ian Wright.

She started dating drummer Dave Danger who played with The Holloways. At three years, it was her longest relationship but she did not adjust well to the long periods they spent apart due to work.

In her 2015 book, Storm In A C Cup, she wrote: “I didn’t know how to be alone day after day. I was really struggling emotionally.”

Dave left her in 2009 after a series of rows and Caroline was devastated. She said he was “that one big defining break-up”.

In a pattern to be often repeated, her career took off while her personal life was in tatters.

At around the time she was introduced to Prince Harry but their “romance” came to nothing.

Caroline wrote: “Once the story got out, that was it. We had to stop seeing each other.”

She said at the time that the best distraction when things were going wrong in her emotional life was live TV, as “nothing intrudes” when you are in front of the camera.

Her love life was back in the headlines in 2011 when she started dating One Direction’s Harry Styles, who was then 17. She was 31.

She brushed off criticism, saying: “In the entertainment industry nobody asks what age you are.”

If you are affected by any of the issues raised in this article, please call the Samaritans for free on 116123

The fling fizzled out and later that year she got the job hosting The X Factor spin-off show The Xtra Factor with Olly Murs.

Caroline returned for two series before Sarah-Jane Crawford replaced her.

Like a true pro, she bounced back by competing on Strictly in 2014.

By then she was dating music manager Jack Street but he ended their 18-month relationship when she was on the show after he grew close to Glee actress Dianna Agron.

Gutted Caroline fluffed her steps in the semis with professional Pasha Kovalev. She wrote: “He knew the reason. My private life was in shreds.”

Despite the setback, Caroline won. However, she woke depressed the next day.

She said: “I couldn’t get up and just couldn’t pick myself up at all that next year.

"I felt ridiculous, being so sad when I’d just won the biggest show on telly.

“However, I felt like I was being held together by a piece of string which could snap at any time.”

Despite her troubles, Caroline’s star status was secured when Simon Cowell asked her to present The X Factor with Olly Murs in 2015.

And yet she cried after the first live Sunday night when trolls criticised her look, legs and laugh.

She had a panic attack in her dressing-room and was put on anti-depressants, ditching them later as they made her feel “numb”.

She said: “Feeling something was better than feeling nothing at all.”

She faced a low point when Bafta host Graham Norton joked about her getting sacking from The X Factor in front of six million viewers. As usual, she bounced back.

Caroline dusted herself off and returned to Love Island, which she began hosting in 2015. When it won a Bafta in 2018, she collected.

Success was accompanied by another rocking relationship, this time to former The Apprentice star Andrew Brady.

They got engaged after a whirlwind romance but she dumped him after arguments.

She said of the split: “I coped the way I always do — I cried in private and did my grieving behind closed doors.

"Then I put on my make-up, painted a smile on my face and kept my head up high.”

Ever the romantic, Caroline said: “I absolutely believe in love and there’s no better feeling than when you’re falling for someone.”

She had that high again with Lewis Burton who moved into her North London home where she allegedly assaulted him. She reckoned he was “the one”.

Tragically, she never got her happy ever after.

'They can't see way out' 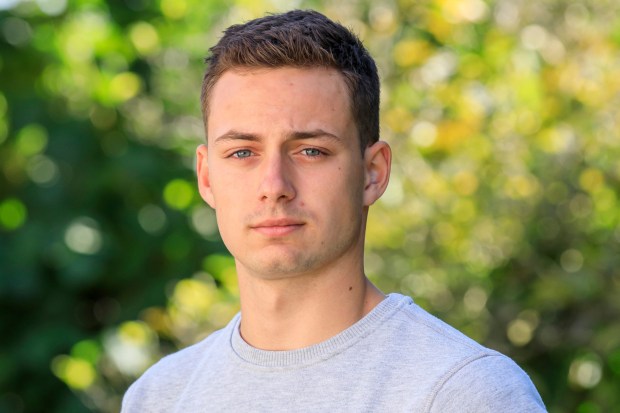 Ben says: “Losing anyone at a young age is horrible, but losing someone to suicide throws up so much confusion.

“You wonder what was the last thing you said to them?

"How could this have happened without you even noticing something was up?

“In that moment that person couldn’t see any other way of coping with their own emotions. You can’t blame yourself.

“We need to remember that there is help. Someone is always listening.

“No matter how alone you feel, speak up.”