California’s governor has proposed a $12bn plan to tackle its homelessness crisis, calling the situation in America’s most populous state “unacceptable”.

Buoyed by a large budget surplus and swimming in federal pandemic recovery money, Gavin Newsom’s proposal includes $8.75bn over two years to create an estimated 46,000 housing units, expanding on a program he launched last year to convert motels and other properties into housing. Nearly half the money would go toward housing in places where people with mental health and other behavioral issues can get services onsite.

Newsom, who faces a recall election this year, also proposed spending $3.5bn on rental subsidies, new housing and shelter with the aim of ending family homelessness within five years. The effort would help families with minors avoid losing their homes in the first place or help them get sheltered without spending days, weeks or months on a waitlist.

The nation’s most populous state has an estimated 161,000 people experiencing homelessness, more than any other state. Advocates say they can’t house people quickly enough with a shortage of units and high rents.

“As governor I actually want to get something done. I don’t want to talk about this for a decade,” Newsom said in a news conference at a former San Diego Residence Inn that has been converted into housing for 177 previously homeless people.

“What’s happening on our streets and sidewalks is unacceptable,” he said.

The largest concentration of homelessness is in Los Angeles, where Mayor Eric Garcetti last month vowed to spend nearly $1bn to move some of the 61,000 homeless people in Los Angeles county off the streets. Rows of tents, cardboard shelters, battered RVs and makeshift plywood structures have now expanded beyond Skid Row throughout the country’s second-most populous city.

“If we couple it with actually taking steps to close our affordable housing gap, it could be good,“ said Dr Margot Kushel, director of the Center for Vulnerable Populations at the University of California, San Francisco. “The people who are homeless right now do need a response today, and not five years from now.” 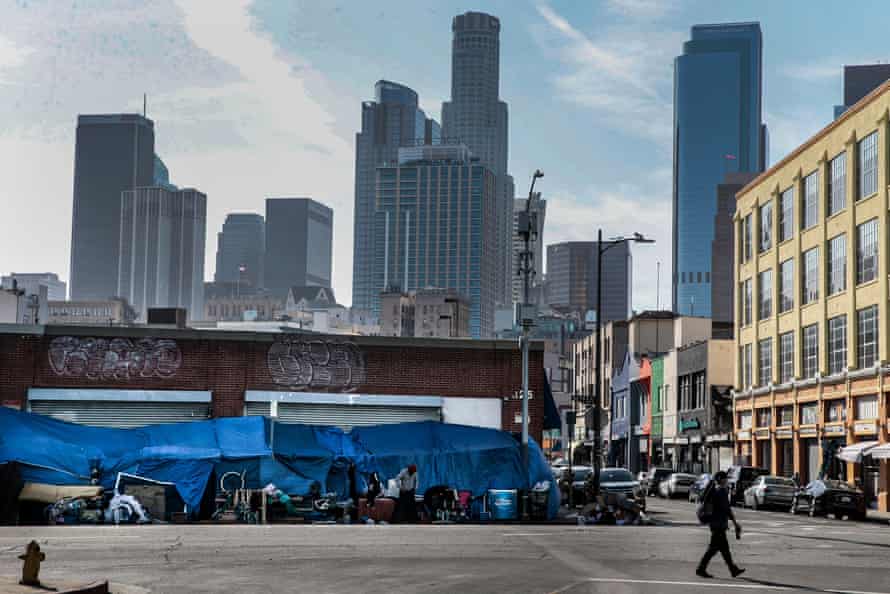 If Newsom’s plan wins support from the state legislature, its implementation would depend heavily on the willingness of local governments and communities to go along, which is often a significant barrier.

“Every community group that you go to demands that you solve the problem of homelessness, and then in the exact same meeting they’ll demand you don’t solve it anywhere near them,” said Nathan Fletcher, a San Diego County supervisor and a fellow Democrat who appeared with Newsom.

The governor’s proposal is part of a $100bn pandemic recovery plan Newsom is rolling out this week, thanks to an astounding $76bn budget surplus and $27bn in new funding from the federal government’s coronavirus spending bill.