A suburban South Australian shopping centre has created a buzz after it falsely attributed a quote about bees, written on a plaque in a bathroom hallway, to the famous British naturalist Sir David Attenborough.

The plaque, labelled “honeybee propaganda”, has now been removed after Attenborough himself intervened.

It all started in July when wildlife sciences graduate Heath Hunter spotted a honeybee mural on a wall in a hallway leading to toilets at the Westfield Tea Tree Plaza shopping centre in Adelaide’s north-east.

Alongside the mural was a 10cm plaque with a quote attributed to Attenborough that read: “In the last five years the bee population has dropped by a third. If bees were to disappear from the face of the Earth, humans would have just four years left to live.”

Hunter immediately recognised the quote, which had been popularised in a meme on Facebook. Internet sleuths have traced the origin of the quote to The Life of the Bee, a book published by the Belgian playwright, poet and essayist Maurice Maeterlinck in 1901.

“Remove the bee from the earth and at the same stroke you remove at least one hundred thousand plants that will not survive,” Maeterlinck wrote. 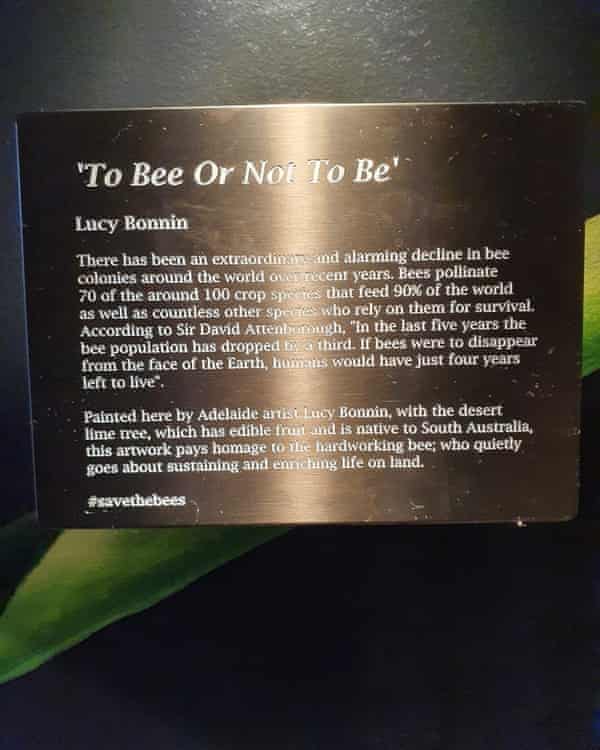 The plaque that once accompanied a bee mural at Westfield Tea Tree Plaza shopping centre in Adelaide. Photograph: Supplied by Heath Hunter

For a century the sentiment would be repeated in various forms before it spread through the internet. There it has also been falsely attributed to Albert Einstein in reference to declining bee populations in Europe and North America caused by colony collapse disorder.

“It’s honeybee propaganda,” Hunter said. “When people talk about wanting to save the bees, they think about the European honeybee, which is a livestock species.

“People don’t think about all the native bees that need help. Some of these are critically endangered.”

Hunter alerted the shopping centre’s management via the mural’s artist – who had no responsibility for the plaque – and was told that management would “look into” replacing it.

“Whilst the plaque may have misrepresentation it is not causing any harm [and] promotes the [importance] of bees globally and for the local community to be appreciative and considerate of them and their habitat,” they said in an email.

When he returned a few months later, however, the plaque remained. Hunter then wrote directly to Attenborough, explaining the situation and including a photograph of the plaque.

“I thought, bugger it, I’ll send a letter to the great man himself and see what he says,” Hunter said. “Then I forgot about it for a bit, and it was probably about a month later I got a letter back from him.

“He said in a very David Attenborough way that ‘I didn’t say those statements and I believe that’s false’. He said he doesn’t use email, so would you mind forwarding that letter to the people at TTP (Tea Tree Plaza).”

But when Hunter passed the message on to the shopping centre’s management, nothing was done, and the plaque was only removed after a local reporter called.

A spokesperson for Westfield Tea Tree Plaza confirmed the removal.

“We appreciate the customer bringing this to our attention. The plaque, including the quote, has been removed,” they said.

Hunter, who volunteers his time as a conservationist, said he never wanted to go to the media but the plaque contributed to the spread of misinformation. European honeybees that have escaped captivity compete with native bees for pollen and evict native wildlife from tree hollows, sometimes killing them in the process.

He said hoped people learned to dig deeper as “Facebook memes are not reliable sources of information”.

“Honeybees don’t need help, they don’t need saving,” he said. “There’s a few hundred species of bee in South Australia alone but people don’t know that. When people think of bees, they think of honeybees.