KATIE Price was pictured at a dental clinic looking glam in leopard print just hours before she broke both her feet in Turkey.

The busty 42-year-old wore a plunging bralet with skintight leggings as she arrived at the clinic with boyfriend Carl Woods and daughter Princess, 13.

She looked in high spirits as she showed off her pearly white teeth and bronze tan.

Carl gave the cameras a thumbs up and sat by Katie's side as they sanitised their hands.

However, the relaxed mood would soon give way to worry and pain after Katie injured her feet jumping off a wall in a freak accident at a theme park.

She will have urgent surgery on both her feet back in London this week after doctors called the damage "severe".

The mum-of-five has been left wearing two special boots and needing to use a wheelchair to get around.

A source told The Sun Online: "Katie's surgery has been rushed forward to this week because doctors say her injuries are really bad - as severe as they could be.

"She's going in this week and the surgery will be a huge job. She won't be able to walk for at least six months.

"Katie's devastated, obviously, but also hopeful that the sooner the surgery happens, the quicker she can start on the road to recovery."

A representative for the star told us: “I can confirm preparation is underway to ensure the next few weeks are cleared for Katie's recovery post surgery."

Last week Katie visited her surgeon at the Fortius clinic in West London.

However, The Sun Online revealed Katie was told her recovery could take up to two years - and she might not walk for six months.

A source told us: "Doctors are saying she won't be able to walk for six months, or put any weight on her feet.

"She needs major surgery on her feet ASAP as it's worse than anyone realised.

"The recovery could take up to two years. She won't even be walking around until well into 2021. She's really upset and can't believe it's this bad." 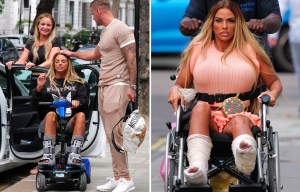 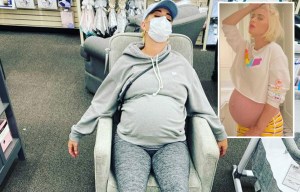 Katie alluded to the bad news on Instagram, writing: "Just finished my appointment with my consultant and surgeon about my feet.

"After further scans, the news is absolutely devastating. I'm gutted."

After her two-hour appointment with a consultant, Katie looked sombre as she left the clinic.

She explained how the injury happened in another social media post, calling it a "silly little accident".

"I was running and jumped over a wall because it was a little short cut and didn't really judge the height, fell funny on my ankles," said Katie.

Alonso went on the bus at half-time against West Brom. Lampard was angry as ever
Zidane on Hazard: It's ready. He has long been concerned about a serious problem, but now everything is fine
Ex-Atletico midfielder Futre on Felix and Fati: I will choose joau. He is special and will soon compete for the Golden ball
Miranchuk will return to the General group of Atalanta after a break for national team matches
Alonso went on the bus after being replaced and was scolded by Lampard. So the coach has never been infuriated
Manchester United are Interested in Jovic and are in talks for Cavani
Inter have moved closer to Juve, but are unlikely to win Serie A. There are problems with the defense and Conte's system
Source https://www.thesun.co.uk/tvandshowbiz/12365475/katie-price-pictured-dental-clinic-before-breaking-feet/

Hospitality workers call for Government to 'cancel the curfew'

Not everybody loves Liverpool keeper Alisson as Mane singled out

Newcastle United must watch out for these 5 Newport County dangermen

Students may have to self isolate before going home for Christmas

Will Chile’s constitutional process satisfy its citizens’ thirst for democracy?

Inside the Swansea furniture business destroyed in a massive fire

What are the five types of vagina? From Ms Barbie to Ms Puffs

Scots share positive things that have happened in 2020 amid pandemic

Drug dealer found with 60 wraps of heroin and crack cocaine

Call for tighter lockdown in borough with highest infection rate

Who is US presidential debate moderator Chris Wallace?

PM admits thousands of people will need to move jobs