The 45-year-old star is spending quality time with his oldest child after he made the huge move into adulthood with the proposal, announcing that he'd popped the question at the weekend.

Taking to his Instagram Story in the early hours of this [Wednesday] morning, David posted a photo of 21-year-old Brooklyn posing in front of a lake in the countryside.

The aspiring photographer is dressed down for the outing, with his brown hair pushed back with a headband.

He is wearing a baggy grey jumper with the sleeves rolled up and ripped grey shorts, covered in water marks.

Brooklyn has completed the look with a pair of traditional green wellies, with David captioning the post: "Handsome country boy @BrooklynBeckham".

David previously shared Brooklyn and Nicola's engagement post as he congratulated the couple on their happy news.

He wrote at the time: "Congratulations to these two beautiful people ♥️

Brooklyn and Nicola went public with their engagement on Saturday, but Brooklyn actually proposed two weeks earlier after asking permission from her billionaire father Nelson.

The Sun Online previously revealed that Brooklyn's mum Victoria almost let the cat out of the bag a week before the announcement with their family Clap for Carers video in honour of the NHS' 72nd birthday.

The 46-year-old star teased her son's exciting news as she poignantly covered 25-year-old Nicola's tell-tale £250k ring with a large red heart emoji in the clip.

The family threw an engagement party with Brooklyn's family - including grandparents - on Saturday, with Posh and Becks set to shell out on a marital home for the happy couple. 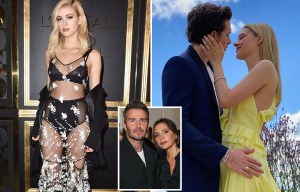 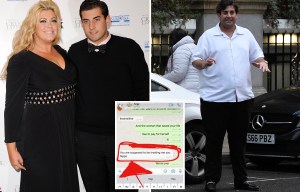 Despite only dating Nicola for eight months, Brooklyn is said to have always wanted to marry young and plans to follow in the footsteps of his parents' marriage.

A source told The Sun on Sunday: "Everyone is delighted for them. Brooklyn has always looked up to his parents and grandparents, who have been married for a combined 70 years, and that’s what he wants.

"David and Victoria are thrilled. They feel he has finally met a girl who is not after him for fame or money. In fact, her family wealth dwarfs the Beckhams’."

Nicola's father, Nelson Peltz, is an American billionaire businessman, and her mum Claudia Heffner Peltz is a former fashion model.