BRITNEY Spears treated her longtime boyfriend Sam Asghari to a shower dance for his 27th birthday on Thursday.

The 39-year-old singer did her own take on the TikTok Toxic challenge and danced to her classic 2003 song while wearing nothing but a short, off-the-shoulder white robe.

The video theme that’s been going viral on TikTok involves dancing along to Toxic in the shower but then smooshing your lips on the glass door when it’s time for the musical breakdown in the song.

Britney did just that and stood in her massive showering space, which features a long bench and two sitting stools, showing off some of her sultry moves before putting her hands on the glass and then her lips.

She captioned the video: “Happy birthday to the man that always makes me laugh 😂🎉🎈!!!!! Who did it better ???? @samasghari”

The post also included a second clip of the birthday boy, Sam, taking on the challenge himself, starting with him sitting down on the shower bench in his own white robe, doing a little spin and then the lips-on-glass portion.

Sam posted the same video to his own Instagram account, asking his own followers who did it better.

A few said he had the better version of the challenge, but most people just commented on how great Sam and Britney’s relationship seems to be.

“The best lovers,” one wrote, while another called them “relationship goals.”

Others sent Sam some happy birthday wishes and thanked him “for all [he’s] doing” for Britney as she continues to deal with her conservatorship battle against her dad Jamie Spears.

Britney and Sam - who began dating in 2016 - appear to be stronger than ever, with him even publicly standing up for her and calling out her father on his Instagram Stories.

"Now it's important for people to understand that I have zero respect for someone trying to control our relationship and constantly throwing obstacles our way. In my opinion, Jamie is a total d**k," he raged earlier this month.

Iran-born Sam added: "I won't be going into detail because I've always respected our privacy but at the same time, I didn't come to this country to not be able to express my opinion and freedom."

His rant came after the release of the documentary Framing Britney Spears, which shed light on her mental breakdown, her 13-year conservatorship and the #FreeBritney movement.

The pop singer, 39, and her ex-husband Kevin Federline, 42, share sons Sean Preston, 15, and Jayden James, 14, and she's reportedly seeing them less and less now that they're in their teen years.

She shared a rare photo on Monday of her with her boys, posing in the middle of her sons as they stood in a field.

Britney reflected on how her sons are growing up in the caption, writing: "It’s so crazy how time flies .... My boys are so big now 👩‍👦‍👦 !!!!

"I know … I know … it’s very hard for any mama especially a mama with boys seeing them grow up so fast !!!!"

After being given 30 percent unsupervised visitation rights in September 2019, a source told Us Weekly that Britney is only spending time with her sons “periodically” and not on any “set schedule.”

The insider said they spend most of their time with their dad and added: “They are teenagers now and want to be with their friends, not their parents. It’s nothing against Britney. 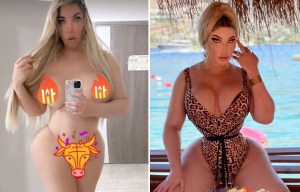 “They love and idolize her, and Kevin trusts her. It’s just that they’re getting older, so when they’re not at their main home with Kevin, they’re usually out doing things with friends.”

They know all about the #FreeBritney movement and the public’s overwhelming support of the singer amid her conservatorship battle.

Sean and Jayden “just want to see their mom happy” and are aware of what their grandpa Jamie is like, with the insider revealing that the teens “do not get along” with Britney’s dad.