How Brighton supporters must wish they had never heard the name Wilfried Zaha. Crystal Palace’s talisman has made a habit of saving his best for their bitter rivals and it was his penalty - a fifth goal in his last five matches against these opponents here - that denied Graham Potter’s side the opportunity to scale the Premier League’s summit.

Yet, for once, it didn’t end up being Zaha’s night after all. A late strike from Neal Maupay after Palace thought they had the points sealed ensured it was Brighton’s players who ended the evening with smiles on their faces. While Brighton were aiming to go top of the table for the first time in their history, it was almost exactly 42 years to the day since Palace achieved the same feat under Terry Venables.

The clashes between sides led by the former England manager and his Brighton counterpart Alan Mullery in the late 1970s and early 1980s have given this unlikely derby a feisty edge ever since, and the police presence in the streets around Selhurst Park gave an indication of the antipathy that still lingers strongly.

The absence of Brighton’s influential midfielder Yves Bissouma due to a knee injury forced Potter into a switch of formation from the victory over Leicester last week, with Pascal Gross taking his place and defender Tariq Lamptey on the bench having made his long-awaited comeback in midweek against Swansea.

Vieira handed Odsonne Édouard his first start in place of Christian Benteke after the new striker’s heroics here against Tottenham earlier this month, while captain Luka Milivojevic was recalled.

After a huge reception from the home fans for Zaha on his 400th appearance for the club, Palace began with the intention of maintaining their momentum from the 3-0 victory against Spurs.

Yet despite the Ivory Coast forward’s best efforts, they found Brighton’s five-man defence difficult to break down and only had a blocked effort from Conor Gallagher to show for their dominance during the opening 15 minutes.

<strong>The Fiver: sign up and get our daily football email.<br></strong>

An Édouard effort that was easily gathered by Robert Sánchez at least registered a shot on target. Palace’s star winger had made 14 of his appearances against Brighton, and Vieira had urged Zaha to use his experience of this intense occasion to help guide his younger teammates.

However, a lapse from Tyrick Mitchell almost allowed Leandro Trossard to open the scoring just after the half-hour mark before Danny Welbeck wasted a great chance after being played in by Sánchez’s punt forward. Replays suggested Welbeck may have been impeded as he attempted to lift the ball over Vicente Guaita but no penalty was given.

Palace’s endeavour eventually paid off on the stroke of half time after a period of concerted pressure.

Trossard’s foul on Gallagher left referee Andre Marriner with no choice but to point to the spot and Zaha slammed the penalty past Sánchez before cupping his ears as he celebrated in front of the Brighton supporters in the away end. 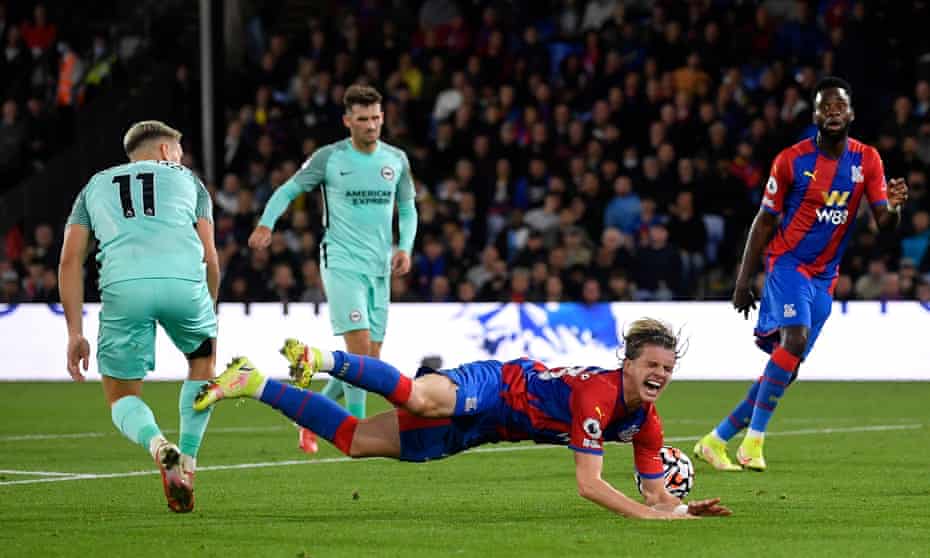 Leandro Trossard (left) is judged to have fouled Crystal Palace’s Conor Gallagher at the end of the first half. Photograph: Toby Melville/Reuters

Potter responded by introducing Steven Alzate and switching to a back four in an attempt to stem Palace’s superiority in midfield. It seemed to have an immediate effect as Lewis Dunk forced Guaita into a save from a Marc Cucurella free-kick and Adam Lallana then had a shot blocked.

Driven on by the endless energy of Gallagher and the evergreen James McArthur, who at 33 and in the final year of his contract looks as good as ever, Palace also continued to pose a threat in an entertaining contest. Sánchez had to be alert to punch away Joachim Andersen’s header before Alzate was replaced due to an ankle injury.

The arrival of Benteke with 20 minutes left was a sure sign that Vieira sensed an opportunity to pile pressure of Brighton’s defence as they went looking for an equaliser. The chance duly came with 14 minutes to play when Gallagher’s interception allowed Benteke to set up Jordan Ayew, only for him to drag his effort wide. It proved costly when Maupay pounced in the last minute of injury time to deny Vieira a famous victory.

Woman groomed by police officer after reporting her abusive dad

Scrambler bikers ride out before funeral in 'tribute' to murdered dad

Spiking in Newcastle: The city centre bars taking action to protect drinkers on a night out

How many kids does Lisa Vanderpump have?

Covid progress 'could be lost' if people do not have vaccine jab, Sajid Javid warns

Right to give last rites should become law after Amess death, MP says

Convicted terrorist recruiter says he's 'here for the families' and will give evidence to Manchester Arena bombing public inquiry, if 'treated fairly'