‘Too early to say’ if lockdown will end by summer, Boris Johnson says

Michel Barnier has waded into a row over the status of European Union diplomats in the UK after Brexit, warning the government in Westminster to “be very careful” after it emerged the bloc’s representative in London had not been given the same status as other ambassadors.

The Foreign Office is refusing to grant EU ambassador Joao Vale de Almeida the same diplomatic status afforded to representatives of individual nation states but Mr Barnier insisted the bloc cannot be treated solely as an international organisation, urging both sides to instead reach a “clever and objective solution”.

Her Cabinet colleague Brandon Lewis, the Northern Ireland secretary, had argued that the coronavirus crisis, not the end of the transition period, was solely to blame for the shortages before Ms Truss contradicted him, blaming “both of those issues”.

Good morning and welcome to The Independent’s coverage of developments in Westminster and beyond today.

Liz Truss admitted Brexit has to take some blame for food shortages in Northern Ireland, contradicting Brandon Lewis who had claimed disruption was solely down to the coronavirus crisis.

Ms Truss said both factors were to blame before defending against “predictions of armageddon” over Brexit which she said “simply haven't happened”, adding “we're now seeing a more rapid flow of goods into Northern Ireland and those supermarket shelves are being stocked”.

“Of course there was always going to be a period of adjustment for businesses,” she told ITV’s Peston. 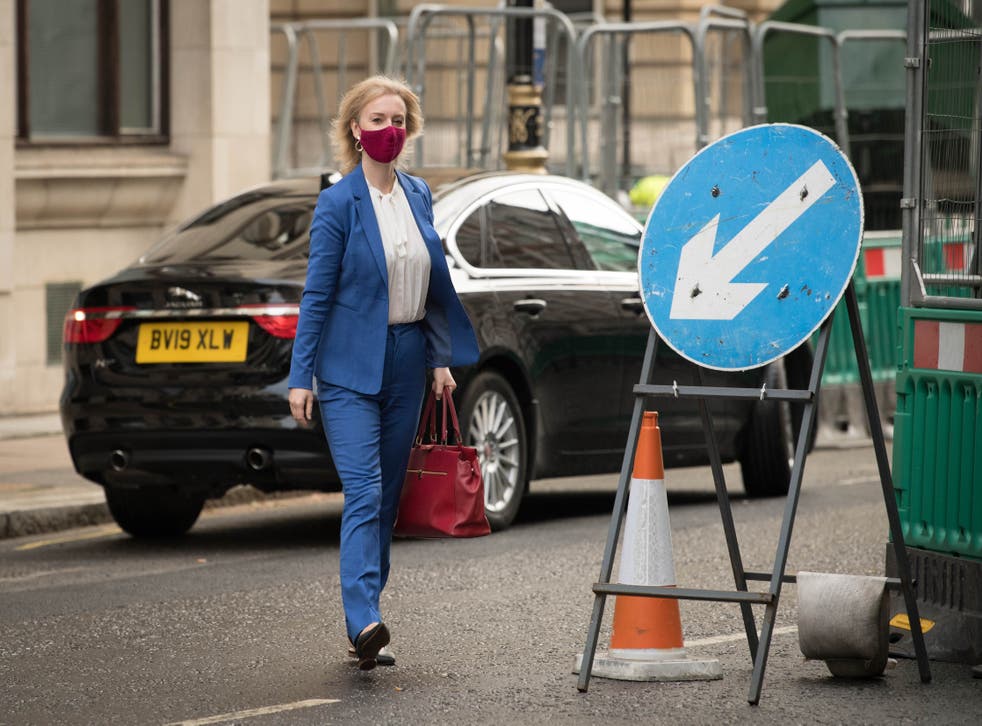 ‘Of course there was always going to be a period of adjustment for businesses,’ says Liz Truss

Diplomatic row sparked between UK and EU over ambassador

A diplomatic row has flared up between the EU and its only former-member state after the UK refused to grant the bloc’s ambassador in London the same status afforded to representatives of individual nations.

The Foreign Office insists Joao Vale de Almeida should not have the privileges and immunities granted to diplomats under the Vienna Convention. The UK is understood not to want to set a precedent of treating an international organisation the same as a nation state.

The EU argues it is not the same as an organisation such as Nato as it has its own currency and judicial system. The EU’s foreign affairs representative has written to Dominic Raab expressing “serious concerns” and the bloc’s foreign ministers are expected to discuss the issue in their first post-Brexit transition meeting next Monday.

Labour is set to take aim at chancellor Rishi Sunak’s handling of the coronavirus crisis, saying his policies have cost jobs and caused “untold harm” to business.

Shadow chancellor Anneliese Dodds will use a speech to the London School of Economics today to accuse her Tory opposite of setting up a “false choice” between protecting public health and the economy.

This will be the second attempt to make a splash with a big speech from Ms Dodds in as many weeks. The last, where she set out Labour’s plan for a “responsible fiscal framework”, received some coverage for her split with the economic approach of the Corbyn era but did not make the front pages.

Gavin Williamson said he would “certainly hope” to reopen schools in England before Easter and stressed that teachers, parents and children will be given a two-week notice period before any return.

In an interview on BBC Radio 4’s Today programme, Mr Williamson also sidestepped questions whether there was a “crisis in confidence” in his leadership at the Department for Education — the day after his opposite number on the Labour frontbench called for his resignation.

Political Correspondent Ashley Cowburn has more on this:

‘Schools were the last to close, schools will be the first to open,’ says education secretary

‘Nothing wrong with being woke’ says Boris Johnson

The prime minister would not say whether he agreed with politicians including Lisa Nandy that incumbent president Joe Biden is “woke”, but he did suggest he would not mind if he was.

He then went on to boast his own belief that “it’s important to stick up for your history, your traditions" etc. Will this appeal to both the new president who he will have to deal with and his supporter base of new Tory voters at once? Or neither?

Labour called on Priti Patel last night to update MPs on the UK’s border policy after the home secretary admitted a split in government occured during the early days of the pandemic.

Ms Patel said she had wanted to close the borders last March but was overruled. Her opposite number, Labour’s Nick Thomas-Symonds, said the split “led to vital opportunities to stop the spread of the virus being missed” and has now written to her asking her to tell parliament what has been learned and to outline the government’s border plan going forward as new variants of the coronavirus emerge.

Williamson to lay out ‘Skills for Jobs’ policy plan

Gavin Williamson will take to the floor of the Commons later to lay out the government’s “Skills for Jobs” policy proposals.

The government says the reforms to post-16 education will “put an end to the illusion" that a university degree is the only way to getting a good job.

The education secretary said ahead of the launch the reforms will ensure “all technical education and training is based on what employers want and need”. Focus is on skills he says are needed for economic growth.

George Eustice, the environment secretary, said the government will launch a consulation on funding for flood and coastal defences as parts of the UK struggle in the wake of Storm Christoph.

Responding to a question from Andrew Percy, Conservative MP for Brigg and Goole, Mr Eustice said the government will launch a consulation soon with an eye to placing more weight on communities which suffer frequent flooding.

Eustice is fielding questions from MPs in the Commons currently