The UK Cabinet minister will meet European Commission vice president Maros Sefcovic in the Belgian capital for "informal" talks as they attempt to iron out issues on the Northern Ireland Protocol. Under the terms of the Protocol, goods moving from the rest of the UK moving to Northern Ireland are subject to border checks. The measures aimed at protecting the EU single market whole maintaining a land border between the North and the Republic in line with the Good Friday Agreement.

Earlier this week, EU sources proposed to UK officials 90 percent of border checks could be wiped out but only if Britain agrees to align food standards with those of the bloc.

However, this would mark a huge U-turn from the UK, with Lord Frost's negotiating team previously rejecting any chance of Britain aligning to EU standards.

Following several nights of violence on the streets of Belfast, insiders warned this would still not address concerns from loyalists as it would still require a significant amount of paperwork.

Last month, relations between London and Brussels crumbled when the EU announced it was taking legal action following a unilateral decision from Britain to extend the grace periods intended to ease the introduction of the new controls. 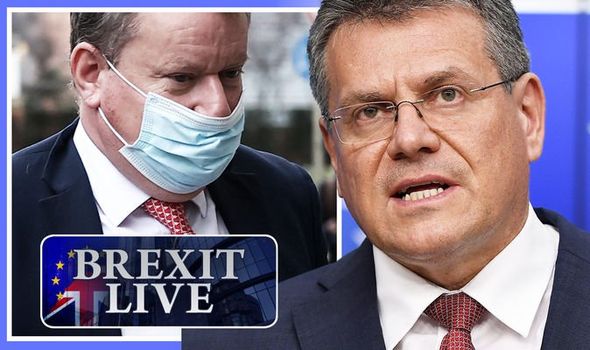 Ahead of the crunch meeting, the UK Government said it had agreed with the EU to have an additional month, until mid-May, to respond to legal action over the alleged breach on the Protocol.

Downing Street has warned the UK and EU still have "significant differences" ahead of the crunch showdown in Brussels on Thursday.

A UK Government spokeswoman said: "Technical engagement with the EU in relation to the Protocol had continued over recent days and we remain in regular contact at all levels.

"The discussions have been constructive but there are still significant differences that need to be resolved. 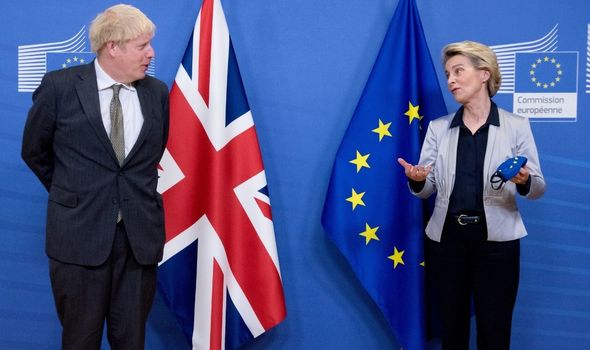 Brexit news: The UK and EU announced a trade deal at the end of last year (Image: GETTY)

"Both the UK and EU are engaging with business, civil society and other stakeholders in Northern Ireland, to understand the issues they are facing.

"The UK remains committed to working through the outstanding issues in order to restore confidence on the ground in Northern Ireland , reflect the needs of communities and respect all dimensions of the Belfast Good Friday Agreement."

7.50am update: UK and EU set for crunch talks in Brussels

The UK and EU are meeting in Brussels later on Thursday as they attempt to resolve the problems over post-Brexit trading arrangements for Northern Ireland.

Brexit minister Lord Frost will hold talks with European Commission vice-president Maros Sefcovic as they attempt to come to a compromise on the differences over the Northern Ireland Protocol.

The Protocol has been blamed as one of the factors behind the recent spurt of violence in loyalist areas of Belfast amid concerns in those communities it has weakened their position in the UK.

Under the terms of the Protocol within Boris Johnson's Withdrawal Agreement with the EU, goods moving from the rest of the UK to Northern Ireland may be subject to checks.

These measures are aimed at protecting the EU single market while maintaining an open land border between the North and the Republic.