Earlier this week reports emerged that AstraZeneca may soon move away from making vaccines, amid its spat with Brussels over the Covid jab. Many commentators have since claimed they are not surprised at the apparent move from the company, with some turning the screw on leaders within the European Union for the move. Leaders such as French President Emmanuel Macron were quick to question the validity of the AstraZeneca vaccine - and at one point falsely claimed the Oxford-AstraZeneca vaccine "is quasi-ineffective on people older than 65, some say those 60 years or older".

Writing in the Sunday Times, author Bryan Appleyard, picked apart the bloc for its attitude towards the jab.

He wrote: "A British government official has been quoted as saying: 'The European leaders who trashed the AstraZeneca vaccine have blood on their hands.'

"This must be true: the delays will have led to deaths and the false accusations will have discouraged people from having the jab.

"Furthermore, all those pathetic, gullible anti-vaxxers will be revelling in any news that there's something wrong with the science." 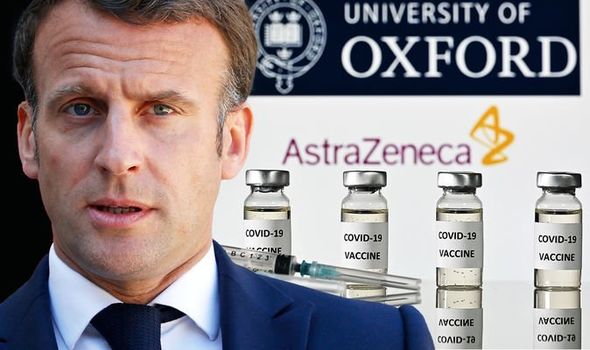 Commenting on low vaccination rates in Africa despite the effectiveness of the jab, the author added: "How has this happened? That anonymous official seemed pretty sure it is all down to the EU: 'They did it out of spite for Britain because of Brexit.'

Unlike some of its rivals, AstraZeneca sold jabs at cost-price making “no profit” from the transactions.

In April the EU launched legal action against AstraZeneca, arguing it had failed to meet its contract for coronavirus vaccines.

The British-Swedish company hit back, claiming the litigation is “without merit” and insisting they delivered to the EU “in line with our forecast”.

According to the Daily Telegraph, AstraZeneca is now “exploring options” for its coronavirus vaccine business, which could lead to a trade sale.

Ruud Dobber, who leads AstraZeneca’s biopharmaceuticals team, has admitted the company is “exploring different options” over its future work on vaccines.

She commented: “The damage caused by Europe’s assault on AstraZeneca is now becoming clear."

Champions of Global Britain believe International Trade Secretary Liz Truss is on the verge of striking a deal with New Zealand that will deliver on the promise of Brexit and clear the way for a new relationship with some of the world's most dynamic economies.

The UK completed the latest round of free trade talks with New Zealand last week and Ms Truss said the two countries are “closing in on a deal which would be one of the most advanced struck by any nation”.

There is excitement that a successful deal will turbo-charge efforts to win membership of a £9trillion trans-Pacific free trade area and open up new markets for British exports.

Emmerdale under fire after April bully's hideout is discovered

Manchester United told they missed out on perfect summer signing

Missing Gabby Petito: Footage of her distraught a month before she was reported missing