He couldn't look further from The Chase in a tractor going slowly through the field.

But TV star and actor Bradley Walsh looked at home as he filmed scenes for ITV series The Larkins – the remake of The Darling Buds of May.

Walsh who also hosts quiz The Chase on ITV, sported long sideburns and wore a beige waistcoat and a white striped shirt with black trousers as he filmed on location.

The 60-year-old has one of the lead roles in the new six-part series which will be penned by 'The Durrells' writer Simon Nye.

After his role as Pop Larkin was announced, Walsh said: “I'm thrilled to be asked to be part of this much loved and iconic series of stories."

“The warmth and affection that HE Bates has generated through his books is so uplifting and I cannot wait to be part of the Larkin family. It'll be a hoot!”

The drama is set to be screened later in the year on ITV.

Set in the late 1950’s, The Larkins is the story of a working-class family led by the golden-hearted wheeler dealer Pop Larkin and his wife Ma, together with their six children, including the beautiful Mariette. 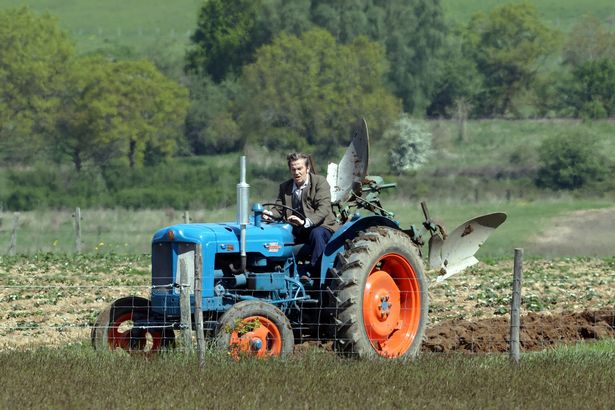 Bradley Walsh as 'Pop' can be seen driving his tractor on set while filming 'The Larkins' (Image: Click News & Photos / SplashNews.com)

Joanna Scanlan will take on the role of his wife Ma and she said: "What better comfort could there be from all we have endured this year than the rolling laughter and outsize hugs of Ma and Pop?

"It’s going to be an honour to help bring The Larkins to the nation’s devices!”

ITV bosses said the new series, penned by The Durrells writer Simon Nye and called The Larkins, aimed to capture the “warmth, optimism and escapism of the family for a modern generation”.

David Jason as Pa Larkin in the original series of Darling Buds of May in 1991 (Image: Mirrorpix)

Bradley Walsh on The Chase with Paul 'The Sinnerman' Sinha (Image: ITV)

Nye said he planned on “expanding the Larkins’ world a little” for the series, last adapted for ITV 30 years ago in a version which also starred Pam Ferris as Ma and Catherine Zeta-Jones as beautiful Mariette, the eldest of their six children.

States race to use COVID-19 vaccines before they expire

International Friendship Day: Has the pandemic changed our friendships forever?

Sean Longstaff in top shape ahead of Premier League season