Boris Johnson has held crunch talks with the EU’s key players as he pushes for a ‘more pragmatic’ approach to trade rules post-Brexit.

In what’s been dubbed the ‘sausage wars’, ministers fear a complete ban on chilled meats being exported out of the UK.

The PM has called for ‘compromise on all sides’ as the bitter dispute threatened to overshadow his hosting of the G7 summit in Cornwall.

Restrictions on British-produced meats entering Northern Ireland are due to come into force in July after a post-Brexit grace period expires.

Downing Street has indicated the UK would be prepared to unilaterally delay the full implementation of the Northern Ireland Protocol to prevent a ban, angering EU leaders.

Article 16 of the agreement allows either side to take unilateral action if its implementation were to lead to ‘serious economic, societal or environmental difficulties’.

However Mr Johnson complained that some of the leaders failed to understand the UK is a single country, adding: I just need to get that into their heads.’ 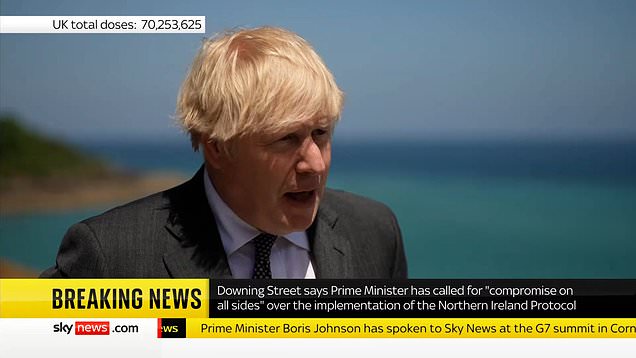 The Prime Minister told Sky News: ‘I think we can sort it out but… it is up to our EU friends and partners to understand that we will do whatever it takes.

‘I think if the protocol continues to be applied in this way, then we will obviously not hesitate to invoke Article 16, as I have said before.’

Mr Johnson pointed to the EU’s own actions in January, when the bloc invoked Article 16 to stop vaccines being exported.

‘I’ve talked to some of our friends here today, who do seem to misunderstand that the UK is a single country, a single territory. I just need to get that into their heads,’ he said.

Northern Ireland is effectively been kept in the European single market under the protocol but this has angered unionists and trouble flared in Belfast earlier this year.

The UK has to introduce checks on goods crossing the Irish Sea to prevent a hard border being put in place with the Republic of Ireland.

Mr Macron and Mrs von der Leyen have both insisted that the protocol is the only way to ensure an open border and that there can be no renegotiation of its terms.

Earlier the PM’s spokesman stressed the ‘urgent need’ to find ‘radical changes and pragmatic solutions’ to enable the protocol to function effectively.

Speaking about the discussions between Mr Johnson and EU leaders, he said: ‘In all cases they agreed that they needed to continue discussions on this and to continuing talking to try to find a way through.

‘The Prime Minister’s desire currently is to work within the existing protocol to find radical changes and pragmatic solutions. That is our immediate focus.

‘Currently as implemented, the protocol is having a damaging impact on the people of Northern Ireland. We need to find urgent and innovative solutions.’

The Premier League will change the approach to determining offside with the help of VAR: There will be no more offsides due to the nails and noses of players
Tottenham will sign Romero for 50+5 million euros. Atalanta can rent Demiral with the right of redemption for 30 million euros for a replacement
Pedri played his 72nd game of the season. If he enters the field in the final of the Olympics, he will beat the achievement of Bruno
Spain and Brazil will play in the final of the Olympics, Mexico and Japan-in the match for the third place
European champion Sirigu signed a contract with Genoa
Zlatan wanted to return to PSG before extending his contract with Milan
Inter can release Lukaku for 130 million euros

Is the Pentagon on lockdown?

Extreme caution urged in Gulf of Oman after ‘non-piracy incident’