Boris Johnson has dismissed a second independence referendum as “reckless” and “irresponsible”, as the chances of a majority for Nicola Sturgeon’s SNP at the Holyrood elections hanging in the balance.

Risking a constitutional confrontation with the new Scottish government, the prime minister doubled down on his opposition to a second vote, insisting the public did not want to be “talking about ripping our country apart” in the midst of a pandemic.

It comes as counting continues in the Scottish parliamentary contests, with deputy first minister insisting on Saturday morning it was “crystal clear” the SNP were on course to be the largest party, but the prospect of a majority, remained uncertain.

Achieving the 65 seats needed for an outright victory could make it harder for Mr Johnson to refuse another plebiscite, although if the SNP falls short of that target it could still achieve a majority in Holyrood for referendum legislation with the support of the Greens.

Ms Sturgeon, who is on course to remain as the first minister of Scotland, insisted on Friday that “when the time is right” she will offer Scotts the “choice of a better future” in a second independence referendum. 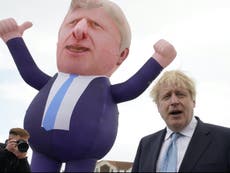 Pressed on whether a majority for the SNP would give the party a mandate to hold a second independence referendum, the prime minister told The Daily Telegraph: “I think that count is still taking place and we’ll have to see what happens.

“I listened to the Scottish election carefully. My impression was that they [the SNP] moved away from the idea of a referendum, and I think very wisely.”

Stressing now was not “anything like the time to have more constitutional wrangling”,  Mr Johnson added: “I think a referendum in the current context is irresponsible and reckless. Let me leave it at that.”

Despite the prime minister’s clear opposition to a second independence referendum, he has not categorically ruled out agreeing to hold one in the future if a Section 30 Order is requested by the Scottish government. Ms Sturgeon has also indicated she will not push for a referendum until the Covid crisis recedes.

Speaking to BBC Radio 4’s Today programme, John Swinney, the deputy first minister, said it was “crystal clear” that the SNP was going to be the largest party in the Scottish Parliament “by a country mile”.

“The question of whether we have an overall majority, which was always a very, very challenging mountain for us to climb, will be determined by the results that are announced in the course of today,” he insisted.

Pressed on whether the SNP lacked a democratic mandate to force a referendum if they failed to achieve a majority on Saturday, Mr Swinney added: “I don’t accept that proposition because I think what that question comes down to is the composition of the Scottish parliament and who said what in trying to get elected to it.

“I’m very confident that of two things: one that the SNP will be the leading party after the elections, it’s very clear that’s going to be the case, and secondly I’m certain there will be a majority in the Scottish Parliament of people who are committed to the holding of an independence referendum on the future of Scotland.”

Tackled on the prime minister’s comments, Mr Swinney went on: “The current context is that we are dealing with a pandemic and my first minister has made clear throughout the election campaign… that we would be back to work, dealing with Covid and sorting out the immediacy of the current Covid context.

“We have a current context which is about dealing with Covid, we’ve said we will have a referendum once we’ve got the the current context of Covid under control — and that’s perhaps the point of agreement we can take forward with the prime minister in due course.”

He added: “We will pursue the route to deliver a legal referendum and Boris Johnson is not some overlord of Scotland. Boris Johnson is the prime minister of the United Kingdom, yes, but the United Kingdom parliament has legislated for the creation of a devolved Scottish parliament for the expression of the democratic will of the people of Scotland.”